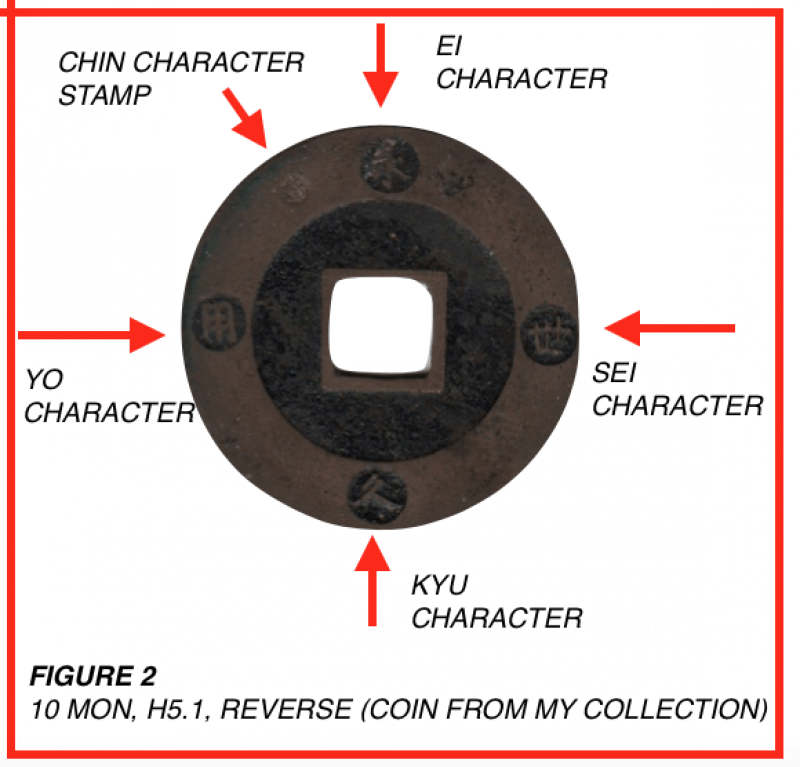 In 1708, the Japanese government pretentiously issued a new coin, the 10 mon, proclaiming it to be precious and everlasting. The 10 mon is a typical calligraphic cast coin which exists in three varieties. To understand how to tell the difference between the varieties, it's important to know how to read the calligraphy. Calligraphic coins can be hard for the Western collector to read. However, a general rule of thumb can be followed for cast Japanese coins. You typically start with the top character (in this case, Ho); next, you read the bottom character (Ei); next, you read the right character (Tsu); finally, you read the left character (Ho). This spells out Hoei Tsuho (see figure 1). Since Hoei was an era in Japan from 1704 to 1711, and Tsuho means currency, it follows that Hoei Tsuho means Hoei currency. Cast in bronze at Shichijo (located in the province of Kyoto,) the 10 mon coins exist in three varieties. Two of the varieties are shown in figure 3. The trick to distinguishing between the first two varieties is to examine the crown of the left Ho (see figure 4). The first variety, Hartill number 5.1, has a deep crown where the vertical stroke reaches the third horizontal stroke, whereas the second variety, Hartill number 5.2, has a shallow crown where the vertical stroke only reaches the second horizontal stroke (see figure 3). The third variety, which is not listed in the Hartill catalog, has a vertical Ei (the bottom character on the obverse), where the vertical center line is perpendicular to the rim of the hole. Its only distinguishing characteristic from the deep crown (H5.1) is that the Ei is slightly straighter. The rarity and price of the 10 mon varieties varies tremendously. The common H5.1 deep crown variety sells for around $30 whereas the less common H5.2 shallow crown variety sells for about $150. Unfortunately, neither picture nor value of the straight Ei variety could be readily found since it is so rare. On the 10 mon reverse, five characters are inscribed. The four main characters, read in the same fashion as the obverse, are Ei Kyu Sei Yo (see figure 2), which Neil Gordon Munro translated to "for the everlasting use of the world." The fifth character, which was stamped onto the rim after casting, means Chin, which translates to precious. However, the Japanese people were disinclined to use these "precious" coins. It is thought that this is because they traded coins by weight rather than by denomination. Since the 1 mon coins weighed about 3g of bronze each, and the 10 mon coins weighed just 8.5g of bronze each, the 10 mon was worth significantly less by weight than its denominated value. This is further supported by the Hartill catalog which shows that the few Japanese people who did use the 10 mon coins traded them for about 3 mon each. To remedy this lack of use, the Japanese government issued a decree stating that those who did not use the Hoei Tsuho would be punished. Ironically, while potentially increasing the 10 mon coin's use, the Japanese government halted production of the "everlasting" Hoei Tsuho in 1709, after only one year of production.

Very cool! Thanks for the informative blog! ; )

Thank you for all of your comments! I will be writing more articles on the 12 ancients series and posting them here soon.

thank you for the informative blog

Another "everlasting" idea that wasn't. very nice blog. A clear explanation of how to read these coins is nice. Thanks for your research.

I enjoy the way you describe the piece. Yes we collect because we like what we see but do you know what your buying. I make it a point to look into my tokens planchects or flans the dies. That's all part of being a collector. You did an excellent job and thank you for that very well done thanks for your research I picked up a lot today.

Fascinating series of articles, thank you for sharing your knowledge.

Awesome, your peaking my interest.