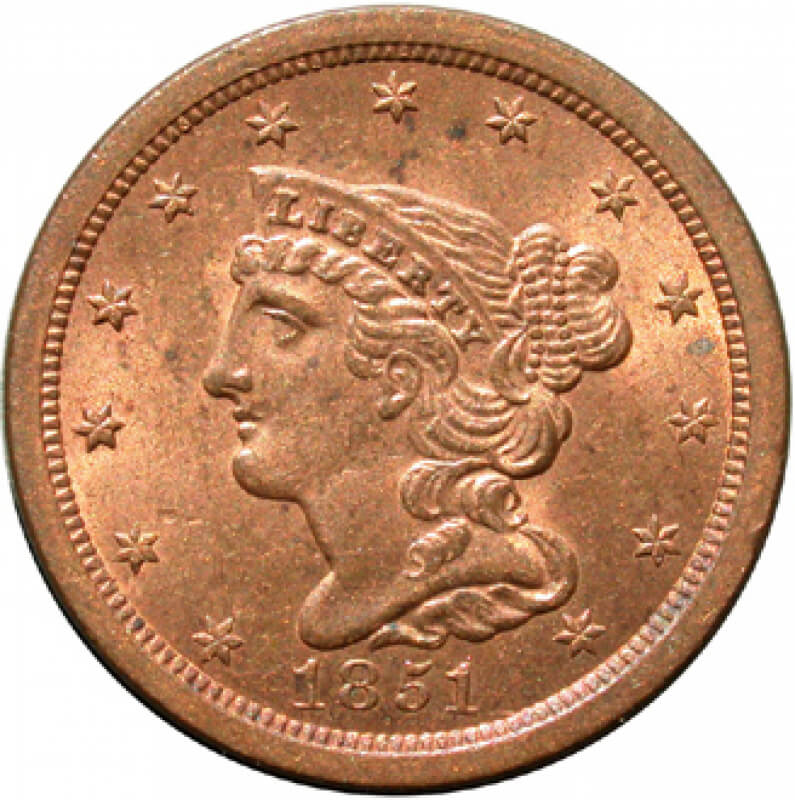 Hi! Numismatist, this blog was supposed to be for  last last week but didn't have time to finish it.

Otherwise I hope you like my blog also PLEASE GIVE ME A BLOG IDEA. thanks.

Half cents were minted between 1793-1857 and contained one hundred percent copper. They were designed by Robert Scot. And they were worth half a cent, so it would take two of them to get only once cent. It was also made up of one hundred percent copper! These coins were only minted from Philadelphia because that was the only mint at the time.There are many different types of cent such as the Liberty cap half cent, draped bust half cent, classic head half cent, and the braided hair cent. The Liberty cap half cent was minted between 1793-1797, the draped bust half cent was minted between 1800-1808, the classic head half cent was minted between 1809-1836 and braided hair half cent between 1849-1857. My personal favorite half cent is the matron or coronet head half cent. These coins were often made as civil war tokens and sometimes you can find civil war tokens by coin roll hunting. But, half cents are very hard to find because they were very old and not many are in circulation today. The prices of these coins range from 25 dollars to even hundreds of thousands of dollars! The first year of the half cent was actually 920,000 dollars and the 1794 high-relief finish was sold for over one million dollars! Also the 1796 and 1831 half cents have mintages under 2,500! Half cents were pretty large and that's why many were counterstamped for elections and other things, some were holed for necklaces and some even became civil war tokens or other kinds of tokens like I said before. Half cents were discontinued because of the coinage act of 1857. It was because their mintage numbers for the coins weren't high enough and also because the price of copper went very high. Today an ounce of copper can bring you around twenty five cents. Large cents were also discontinued because of the act of 1857. Later, they made small cents which contained less copper and the size was pretty small. They made small cents like the flying eagle cent, indian head cent, wheat back cent, memorial cent, and the shield cent. Cents are probably also going to be discontinued in 2022 ðŸ˜­ðŸ˜­ðŸ˜­, so stock up your cents. But they probably still are going to be circulating, it's just that the U.S mint will stop minting them. I might be wrong though. Now, back to half cents. You can also get these half cents by doing the EAC project (Early American Copper project, or the ancient coin project to earn one of these cool coins!

Hope everyone had a great NCW!

Stay safe, stay healthy and have fun with numismatics!

Neat to see and read about coins and their history.

Thanks for a fun read, I only have one example of the Half Cent but it might be worth picking up a couple more.

You spoke on one of my favorites other than the cent itself. Good work, I learned a thing or two.

I asked the other day were did you here this about the cent ? What book ? Were. Thanks for the blog great picture!! Good info except the cent!!

Overall, great blog. Just one quick thing- that source has "$$$ And if you havenâ€™t figured it out by now â€“ Happy April Fools Day! ðŸ™‚" at the bottom, so we will not be losing cents in 2022. Thank you for the great blog!

https://cashmoneylife.com/us-mint-cease-penny-production/ well it was April fools I guess. -edited

Thanks Eriknation. That is a cool photo. Maybe it's only me but photos can really make a blog.

Good blog! I think the modern cent is here to stay for awhile. ; )

Nicely done blog. They are out of my league. Pricey. The cent isn't going anywhere. Where did you read it was? My opinion. I could be wrong. Good job but it needs a picture, please. Thanks.

You write about coins you like. Everyone tells a story. Don't be research . And the cent is not going anywhere in 2022. Let me know where you read that . Thanks.

The only article I can find that says that the cent will cease production in 2022 was published April 1st, and admits it is an April Fools day joke. (https://cashmoneylife.com/us-mint-cease-penny-production/)

I think I found that in an article

No half cents for me. Just never got into them. Nice blog. Thanks