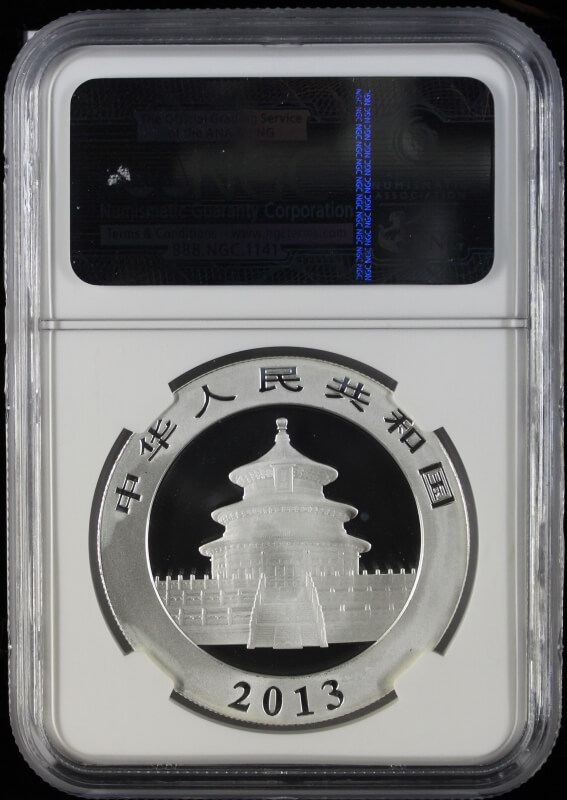 29 Apr 2018
So recently I was at a local show talking to a dealer friend of mine. He let me know that he had picked up some pandas out of a large collection he had bought and asked me if I would be interested in buying some. I said sure and started taking a look through what he had, after a few coins I came across the ungraded coin pictured. Something about it caught my eye as unusual. I told him that there was something not right about it and luckily he had a coin of the same year in an NGC holder so we compared the two. After looking at them both I determined for sure that it was a fake and confirmed it with some online research. This coin series is not my friends specialty so it is understandable how it slipped through the cracks. I am just glad that it got spotted and removed before someone got burned. Below I will give some of the difference between the fake and real versions. The first two photos are of the fake, the slabbed coin is real, and the last picture is a stock photo of the real thing.
1. Fur on the mirror portion is way to thick on the fake.
2. The top & bottom leave patterns don't extend to the edge like the real one does.
3. The bamboo should have a knuckle joint but the fake just has a slit.
4. The ripples in the water are to thin on the fake.
5. The eyes all have to much of a domed center sticking out on the fake
There are other signs that it is a fake but the ones listed are the most obvious. If you are going to buying coins from a trusted dealer that doesn't specialize in that area buy them graded or compare raw coins to graded ones.

Thanks great info thanks for the heads up

You can purchase a lot of fake, copy and outright counterfeit coins from China on sites like eBay everyday. I guess they don't draw any line when it comes to counterfeiting their own coinage.

I still don’t understand why they would counterfeit something with such a low margin.

Great information about fakes! Thank you. There seems to be dishonesty everywhere.

There is dishonesty but also some lack of education.

Thanks for the informative blog. Nice photos.

Great job helping out your friend. That would have been bad had he inadvertently sold it to someone. Thanks for the tells. Can't get too much info on fakes..

That is very true. I hope it helps someone.

It's pretty obvious when they are side by side. I doubt that I would have caught it.

I buy them every year so I guess it gives me a little better edge.

This is what I hate about the hobby. Chances are they made these themselves. Then they take our money. Thanks.

They most likely did come from China.

Good grief, there are fakes everywhere. Great job of finding this fake. This info is very helpful. Thanks!