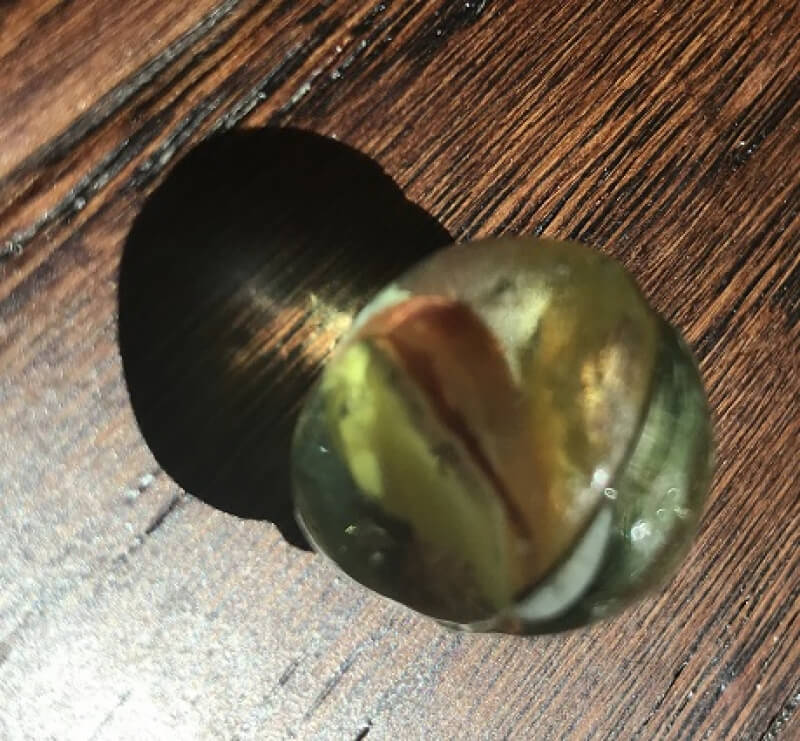 This week I have for you a new freak, well actually two.  When thinking of the collect ability of errors I remembered my first error of a sort.  This error was won in a marble game while I was attending Berkley Manor Elementary School on Camp Lejeune.  No this was not a coin held for the winner of the game it was a single catâ€™s-eye marble that was actually two machine ground together.  I lost quite a few marbles before I got this prize and these many years later I still have it, granted I have my other marbles too despite those that may at times feel I have lost mine.  Jokes on them they are located here on my desk in two glass jars.  These coin curiosities I collect I believe like my freakish marble are put aside because of their deformity.  I am sure there is a coin out there that would fit nicely with my cast of freaks squirrelled away in the back of someoneâ€™s dresser awaiting rediscovery much like my misshapen marble.

Now what I have for your numismatic viewing is a Washington Quarter but not just simply a run of the mill version but something for you seekers of the bizarre.  This one is something special as how often do you see Washingtonâ€™s classic bust rendered in copper along with an eagle on the reverse.  Okay you colonialist with your powder wigs, yes it has been done before, but this was wholly unintentional or was it.  When originally proposed the eagle was reserved for those coins of intrinsic value not a lowly copper piece like this, then again by 1968 did that rule honestly apply?  Sorry I digress, so if it was not enough that this quarter was struck on a cent planchet, there is also a sliver of nickel cladding in Washingtonâ€™s wig.  There is another member of my menagerie where a cent planchet met the 1968 quarter dies, but alas there are no silver highlights in the hair caused by the inclusion of nickel debris.  So with the silvered hair it stands a cut above its poorer cousin that only was so lucky as to be struck on a cent planchet.  As to whether this coin or my other was an accident or intentional that will never be known for sure.  Regardless a penny planchet was in the bin or at least the feeder when quarter striking began.

As to the stats on the piece it is encapsulated in a PCGS holder and graded MS63BN.  The unusual shape of the coin leaves it as a rattler though the holder is not the old green type known by that name.  I am almost tempted to send it to NGC as I think they do a better job with their finger style holders on these deformed pieces.  The only reason for not changing is that PCGS coins tend to get a little bit more than NGC at time to sell not that I intend to let this Washington Quarter go anytime soon, boo hahahahaha.

Now adieu until next time.

Interesting items to have in your collection.

Is this a quarter that was not "clad" when it was minted?

No it was struck on a cent planchet. There just happens to be some cladding debris which I suspect left in the die or possibly it was just pushed in with the feeding fingers with the cent planchet prior to striking. Just like how did the cent planchet get there we will never know likewise how a piece of cladding also arrived at the same time will be unknown.

Those are both beauties. It has been a long time since I heard anyone playing marbles. Great game. Now, your error quarter is fantastic. I love error coins.. I can't wait for your next "freak". Thanks..

Yes it has been a long time since I have seen let alone heard of anyone playing marbles. The way we played was not the traditional shoot it out of a circle. The first person would toss their marble out and the next person would try to hit it by throwing their marble at the other. This would continue until you heard the marbles hit with the winner getting to keep theirs and the one they hit assuming you were playing for keeps. Of course sometimes that winning hit would chip one or both marbles and sometimes the targeted marble would even crack or practically explode on impact. The latter was a bummer but at the same time spectacular to see. Unfortunately some disappointed player must have told their mom and playing for keeps stopped then eventually the school banned playing marbles altogether.

Awsome! Sounds like you've got a pretty good collection of error coins going on there!