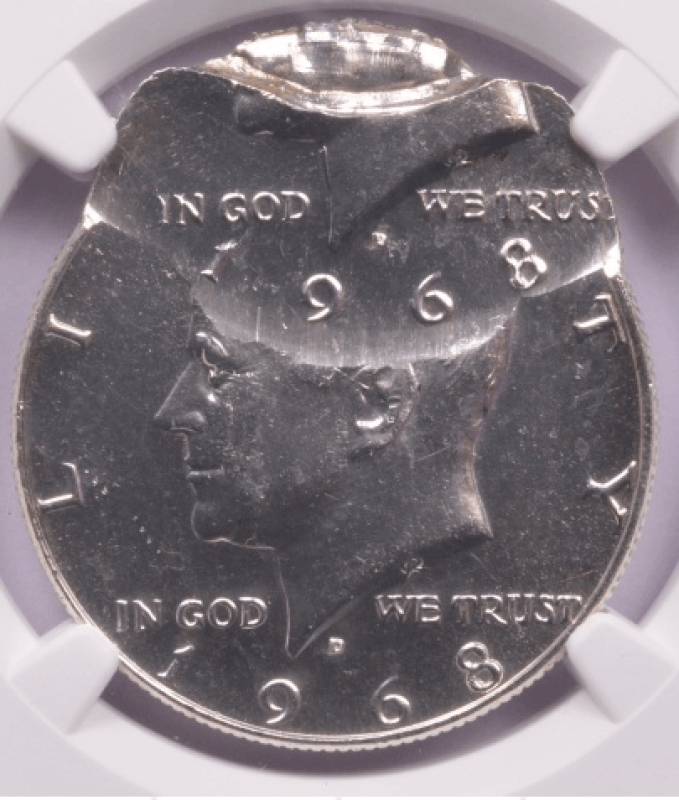 Hello again, I have to say selecting the freak to close with was almost harder than choosing the one to lead with.  I was lucky enough to add two more members to my cast from the most recent offering of ghouls from Heritage's special offering ERROR COINS online auction in September.  Despite picking up a really grotesque freak from Heritage I ended up choosing a monster of a double date I acquired during the most recent ANA show held in Texas.  I really did not have my eyes quite adjusted on the dealerâ€™s inventory when I first saw this coin  in the case.  I was prepared to look at a rather unusual clipped Kennedy I had seen in the dealerâ€™s inventory online now in person, but sadly it was eclipsed by this one that I am showing you today.  I even had to make that really hard choice of do I get them both or do I leave one behind.  My budget not being as large as the state I reside I did have to choose one so the clipped 1968 Kennedy ended up in another's collection whereas the double date Kennedy found a new home with my troop of misfits.  Of course the story is not as sad as it seems as I did leave out that I had my eye on a 1968 quarter on cent planchet in another dealerâ€™s inventory that has a beautiful blue hue that I also took home that day.  So any remorse felt for my loss should be weighed by the fact I added two members that day too, so boo-hoo for me, NOT!

There is no doubt this is a double struck coin as both the date and the mint mark appear boldly at the 12 oâ€™clock position just above Kennedyâ€™s ear.  You can also notice an indent where the cheek would have been on the second and final blow.  On the reverse there is no indent and also no denomination as the second strike removed all but the â€˜Hâ€™ from the first strike. Using the indent and a little imagination you should be able to picture there being a dateless half with a headless eagle also created at the same time my piece was stuck.  I know this other piece will not turn up in any of my searches for 1968 pieces, so I would need to broaden my search to find it.  Like I said in a past installment collecting errors can be fun not just for how unique they are, but with a little knowledge of the minting process trying to figure how they were created and if others were created in the process.  I have seen a few errors where the lucky finder had both pieces with the best example for my area of interest being a proof 1968 dime with a football like fragment embedded where the date was leaving an indent place of the date on the dime.  Both were holder together to preserve them as a single item.  No I do not own this piece as it was out of my budget at the time, now you can sob a bit for my loss if you want.

As for stats this member of my cast was encapsulated by NGC so you get a good view of the third side of a coin with their fingered holder.  It is listed as 1968 D 50C, DOUBLE STRUCK, WITH OBVERSE INDENT, MINT ERROR MS 63.  Though not mentioned in the description the coin has a reflective surface similar to that of the SMS pieces produced from 65-67 being much more attractive, yes even freaks have their moments, than a business strike though nowhere near a mirrored surface you would find on a proof of this period.  It was that flash that caught my eye before the date did when I had that oh boy moment.

Well with only two days left until Halloween I hope you have enjoyed the little peak under the tent to gaze upon my little freaks.  If you too became a little more than curious I would recommend a trip to Colorado Spring next summer providing they are offering James Wiles class on The Modern Minting Process & U.S. Minting Errors & Varieties.  His class and book will give you an appreciation beyond just merely collecting these little rejects of the mint.  So I guess this is it for the freaks as there are other things I would like to write about, but I suspect next year when the â€˜Berâ€™ months return my mind and my writing will drift back to the FREAK SHOW 1968.

Good story I would think there would be more in the Kennedy series. They set a record on hunting have dollars in 1964 that will never be beat by any coin. The series does have many varieties. Thanks. Enjoyed it.

Wow, I love the way you write your stories. You have true talent. Nice error there, I have been debating to trade my $20 Lincoln Cents in to buy a key date or an error coin.