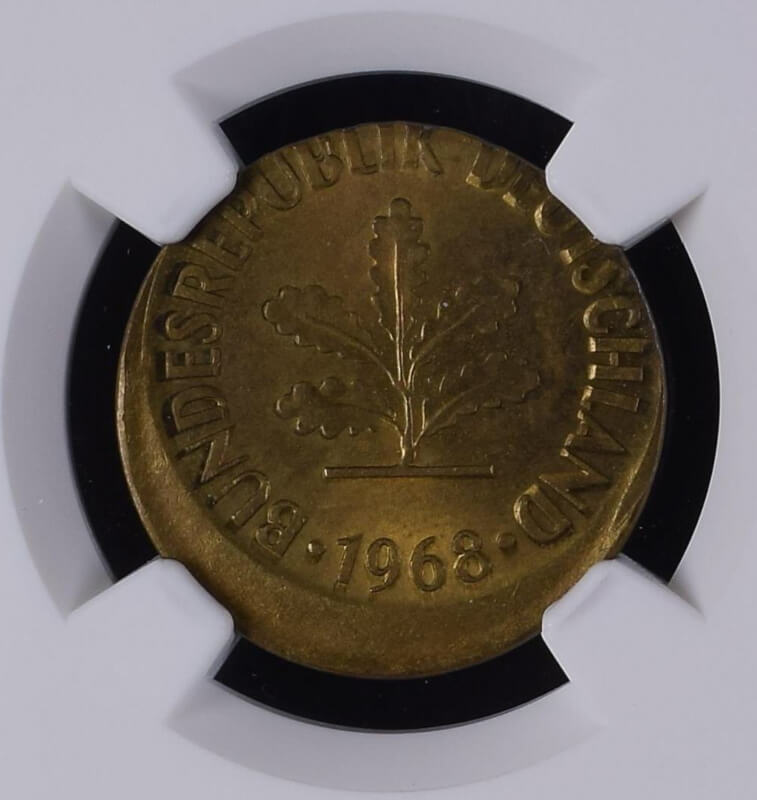 Hello again and welcome to October, this week I bring one of the foreign members of my cast of Freaks out for your viewing.  This one comes to you from across the Atlantic and at the time of its creation it was a nation torn in two by the worldâ€™s two super powers.  Yes it is from West Germany which was only a mere twenty years old at the time this piece was issued.  This one more specifically is from Munich, which is denoted by the â€˜Dâ€™ found at the top between the stylized wheatears.  Can you guess the classification using the PDS system?  If you said â€˜Sâ€™ you either have been following along for the past few weeks or you are just a good guesser as you had a 33.33% chance of getting the right answer.  Of course who am I kidding you probably already knew the answer even before the question was asked if you like these Freaks like I do.

It is interesting to note that this particular coin is struck in medal alignment.  Now how can you tell that, well give me a minute and I will explain. First it is not just because images of the obverse and reverse the text is oriented in the upright position, because without seeing the top of the slab you do not know if I just did not just rotated the images for your viewing pleasure.  The off center error gives you a clue as the design is struck high leaving the bottom of the coin without design elements on both sides.  Having this disfigurement at the same location on both sides confirms the medal alignment then. Further, though I do not have an example yet, if you saw a coin that was off center only on one side you would know you were looking at a misaligned die strike and not just an off center strike like this one.  I guess you could have both dies misaligned in the same direction and for that coin I would leave it to the experts on how you would be able to spot the difference.

As to the stats for this member it is of course in the newer NGC finger style holder, you know I like these holders. It is described as a 1968D Germany struck 10% off center 10P and is graded as MS 65.

I too enjoy your errors. More please..

Looksngreat. Thanks for the info.

Very interesting, Thank You for sharing another marvel.

I love your error coin blogs! Keep making them!