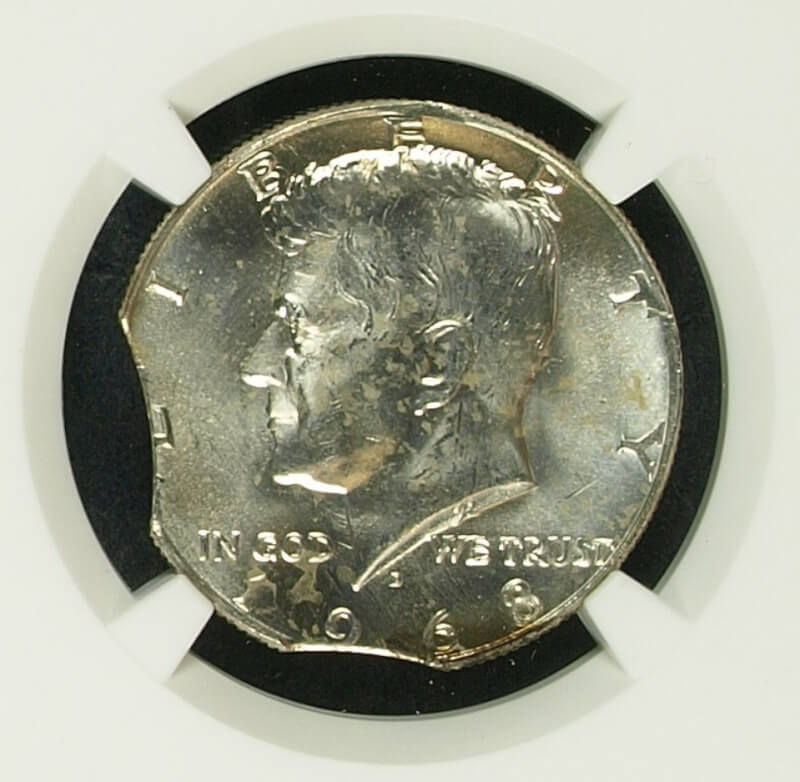 Well today's freak seems to have had some bites taking out of him.  No worries, despite a slightly mottled appearance, I do not see any zombie tendencies in this member.  Still I do hear some rattling when I slip him back in the storage case with the rest of the troop, then again I heard rattles prior to his arrival so I suspect he is safe.  As you might suspect he is a little lighter that the millions of his brethren that carry Kennedyâs likeness and presidential seal.  These bites did not occur after striking, but before.  See the planchet used for this piece arrived at the press deformed having been punched from a sheet that had been already punched.  Just think of the sheet looking like Swiss cheese, though these holes were not formed from gas but previous punches.  Then the punch that made our friend here was created between the gaps, though not quite.  As you see there were at least two other punched holes, voids, trapped in this punch.  Once punched the future error was assured so long as it was not discovered before arriving at the press for striking.

So based upon this story what do you think the error category for this freak is PD or S?  Well I will make it easier as I had previously promised the next freak would not be an âSâ or strike error.  So now your chance of guessing correctly is down to a toss of a coin, theoretically, whether it is P or D.  Though with this sharp group I suspect you already know it is âPâlanchet, as that is what I have been discussing.  Now I have seen much larger portions of a planchet missing on 1968-D Kennedy halves almost resembling a waxing or waning moon.  I like this guy more though due to the multiple clips, bites, though maybe someday I might add one of those lunar cousins to the show.

As for stats it is listed as 1968-D 50C DOUBLE CURVED CLIPS MINT ERROR MS 63 by NGC.  Of course the latter is obvious by the white fingers reaching out to grasp the edges of my little fiend here.  Another interesting tidbit too before I close until next week.  Do you notice a weakness in the design opposite of the clip?  Well your eyes are not deceiving you as this is caused by the fact that there is no pressure to upset the rim of the coin prior to the planchet being made ready for striking.  This weakness can be a used as a spotting feature to possibly determine if a clipped coin is real in lieu of a fabrication.

That is another nice one. You really are getting me charged up to increase my meager error collection. I'm looking forward to your next blog. Thanks for the hint in spotting fakes.

Funny thing when I first heard of this feature someone described it as the dies rocking on the misshaped planchet due to the void. I found that a little hard to believe, but maybe it could explain the weakness opposite a clip. Then when someone described it is the lack of pressure in creating the upset rim opposite of the void it made sense. Basically as the planchet is turned to upset the rim there is no resistance at the void or clip to press the opposite side tight therefore the rim is not raised. That explanation made sense.

Another spectacular error, Thank You for sharing your knowledge and this beauty.

I am thoroughly enjoying the series, thank you!

This piece reminds of those old stories when folks used to bite a coin to see if it was real. One bite is neat, two bites are spectacular. By the way, so you also collect "normal' coins?

Keep making these freak show blogs I love hearing about your error coins!