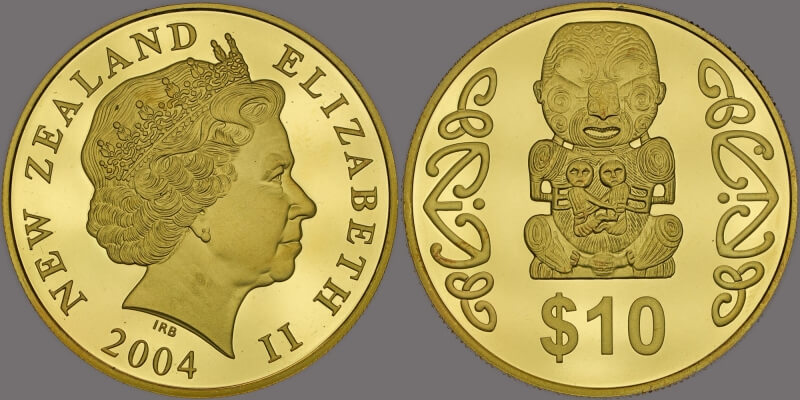 27 Feb 2016
I haven't posted a blog for a while.  Over the last  two months I have been researching and traveling.  I visited my home country of New Zealand and liberated a small number of coins from  a safety deposit box and brought them back to Vienna.  One of the coins I brought back is a rarity and it was one of my early collecting years success stories.
In 2004, when the coin this blog is focused on was issued, I was regularly buying NCLT from New Zealand( New Zealand post).  When I saw this coin and its method of encapsulation I had to have it.

The coin is a 40 gram silver dollar sized gold piece of 22 Kt gold.  It is in a traditional Maori treasure box called a Wakahuia.  When I received the advertisement for the coin I jumped at the chance to own such an unusual type of NCLT. I submitted my order with credit card details and waited and waited.  What I and many other weren't aware of was NZ post had underestimated demand for the 300 coins( for an expensive NZ$1500 in 2004) on the official issue date they had had only had 150 struck and the wooden boxes were taking longer than anticipated.  It took them nearly 4 further months to fulfill my order. The delay was such that I was almost going to cancel my order for the coin when I received the latest NZ catalog. That catalog had  the coin valued at NZ$500.00 more than the issue price.   Behind the production was negotiations with the Ngati Whakaue sub tribe  to whom Pukaki, the person the carving represents, was a venerated ancestor.  There is much more behind the story; but with indigenous peoples rights and the chance of offending through my ignorance  I will not venture here to tell the full story as I understand it.  What I can report is that 30 of the 300 coins were given to the tribe and a further 75(or so), unlikely to ever come to market again,  were also purchased by tribe members.  This of course means the coin will remain a rarity. It is certainly one I treasure.   I prefer this form of encapsulation but  I don't see PCGS or NGC adopting the method.

Beautiful coin and case! Thank you for the information!

Beautiful, meaningful, historical. What more could a collector want?

That is a rare and beautiful coin. Thank you for this info.

Another great blog Ian. The unique style of the coin and case make it a treasure, but the story you told adds so much more!

Thanks for sharing Ian. Beautiful case and coin.

I must admit you had quite a time receiving this coin. But I bet it was worth it. It looks like a beauty. I hope you enjoy it for many year's to come. Thank you for your blog and history.mike