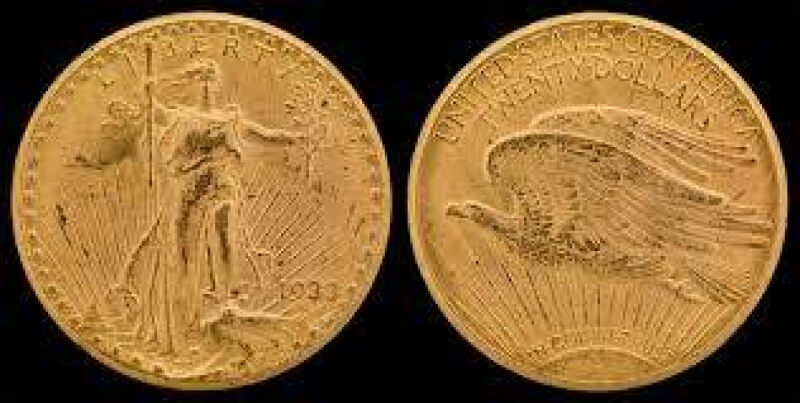 I thought I would do a blog on one of the most infamous coins, the 1933 double eagle. I’m sure most of you have heard of this coin, how it is illegal to own, save 3 examples. I will be going over the history of the coin, enjoy!


It all started in 1905, when Theodore Rosevelt, our nation's 32nd president, asked Agustus Saint-Gaudens to redesign every US coin. He finished the eagle and double eagle before his passing in 1907. It was smooth sailing for the double eagle until 1933, when the depression was at its peak. People were hoarding gold because money wasn’t guaranteed to keep its value, and gold was the surest investment at the time. However, President Rosevelt issued a recall of all gold and gold coins. (collectors were allowed to keep a certain amount of collectible coins) The mint was never really told what to do, so they kept making gold coins. When the mint finally got the order to cease production, they gathered all the coins into bags, and transported them to Fort Knox, where they would eventually be melted into gold bars. However, in 1944, many 1933 double eagles would appear on the market, and the secret service would become involved. The SS managed to seize most of the double eagles, and came to the conclusion that the coins had been smuggled out of the mint by the cashier at the time, George McCain. However, there was one known double eagle that was out of their reach, and it was in the King’s collection in Egypt. The investigation ended near the end of 1944. But, in 1954 King Farouk was exiled from Egypt, and his collection was put on sale. Thousands of collectors flocked to Egypt, excited for the sale. The king’s collection contained the best of the best, cost wasn’t an issue for him. Many people were excited to bid on the ‘33 double eagle, but it was withdrawn from the sale at the last minute for unknown reasons. The coin made its next appearance in 1996, in the possession of dealer Stephen Fenton. He flew to America to sell the coin to an interested buyer, but the secret service seized the coin. After years of legal battles, the coin was arranged to sell at auction, and the proceeds would be split by Fenton and the American government. It sold for 7.6 million to an anonymous buyer in 2002, the last legal double eagle to own. The only legal examples are the one just mentioned, and 2 that reside in the Smithsonian. There was another example that appeared after the sale, but the supreme court chose not to make it legal tender. The story ends there, but more likely that not, there will be more issued with future ‘33s. Let me know if I missed anything! Thanks for reading!

Good blog! Crazy history for sure. Thanks for your research! ; )

wow that is a very interesting story.

Thanks for this informative blog. Many of us know bits and pieces of the story, you put a bow on it and did so in a manner that was easy to read. Thanks again. Later!

I love this coin so very much! Hands down the most beautiful coin the US has ever minted. Quite dissimilar to the new ASE design. Cheers, NM

Maybe someone at the smithsonian will pull a sneaky and release a few of theirs into the market. Quite an odd rarity on how it came to be.

the only one that can legally be sold is the Fenton specimen. I believe that sold for 7.6 million when it was offered for sale. The Israel Switt hoard (10) and Smithsonian specimens will probably never see the open market.

Very famous, but I have never seen one in person. Interesting history on this coin.

Pretty well known story. Been some good movies and books about it. Some fiction some non fiction.

Is it that they were never circulated that made them illegal to own?

Basically that is true, the coins were never released so they remained the property of the United States Government. Those copies that were spirited away were therefore considered stolen. One example, the King Farouk (Fenton) specimen, was allowed to leave the country with an export license accidentally issued by the Government. When the government attempted to seize it, the Fenton lawyers argued that the export license issuance was a de facto public release. So the Government settled, monetized the coin, and allowed it to be sold at auction with a 50/50 split between Fenton and Government. It sold for 7.59 Million, it is the only copy that can be traded on the open market.

Gold Reserve Act. Effective January 30,1934. No persons may own gold with limited exceptions.

Yes we have . I think everyone knows of them. Also a bibliography so we may also read more. Thanks.