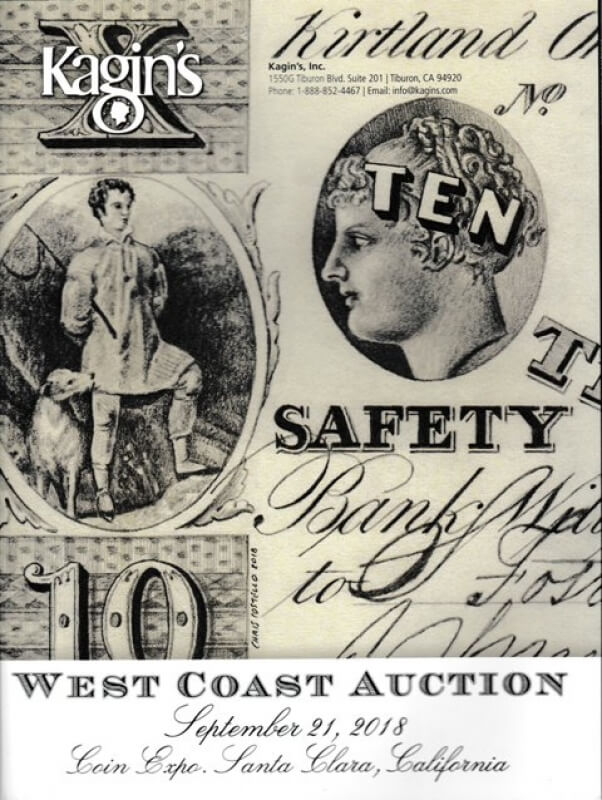 30 Sep 2018
We here at the ANA are so fortunate to be surrounded by fellow collectors and coin enthusiast whom we can talk to and share ideas with.  It's always fun to show off our collections, write blogs and leave comments.  When I think of coins I think of the ANA web-site and all it has to offer.  It's having a special group of friends with a like hobby.  I've never really given it much thought about other people around me in my daily life who might be interested in Numismatics as well.  Until the other day....  I had received two copies of the new Kagin's Auction catalog in the mail and decided to bring the extra one to work.  To my great surprise two fellow co-workers we're also into coins and currency!   Who would have thought!     ;  )
The first person told me that he has his Father's collection of  Civil War Currency and Pre-Revoluntary War Notes.  He's been adding to that collection from time to time.  My other new "Numi" friend has several different coin collections and prefers proof coins.  She also has coins that we're passed down to her from her Mother and Mother-In-Law's collections.  She shared this funny story with me...  When she was a little girl she got into her Mom's penny collection, found a pretty one, took it out and being very pleased with herself proceeded to go and buy some penny candy with it.  Unfortunately the penny she spent was her Mom's   1909-S   V.D.B. Wheat Cent...    Not good...   Mom was not happy  ;  (      Now 55 years later laughing as she tells this story, she still remembers one heck of a spanking...   haha     This just goes to show you there are fellow Numi's all around us!   And needless to say the Kagin's Catalog was big hit!    Thanks for reading my blog.  I hope you enjoyed it.  Comments are always welcomed.

Really enjoyed the blog!!! The hobby helps you escape the politics of the day. Most collectors are a great bunch of people. Thanks for the blog.

Many great ppl are involved in this hobby. I once knew a co-worker who told me she had many old wheat cents, were they worth anything? Before I could look at them, she cleaned them w/kitchen cleanser! I told her they weren't worth much now. She never spoke to me again.

I usually act like I’m the only known person in my day to day universe with an interest in numismatics, which I know can’t be true. You’ve inspired me to share the hobby with others more often. Great blog post. Thanks. Jim

As far as I know, I only have one coworker that collects. Unfortunately, he isn't currently active but I have been trying to entice him back in.

Maybe I should ask around to see how many people at my school are collectors :) If I was that mom, I would have run to the store where the kid spent the coin, hope it's still there. If it's not, I would run screaming down the street...

Great blog with a funny story. A 09-S VDB! My butt would till be stinging.. Probably cost 410 back then.. Thannks

When I saw that picture I thought wow that's an auction win. I was reading hoping you would say you won that. It's ok you still have a great collection. Yes we are lucky to have many people in our lives. I have two special that take care and look out for me. That's what this hobby can do for you. We are lucky. Except that 1909 S V.D.B. these things happen at least they laugh today. Great blog good story. It was worth the waite. Thanks for sharing a wonderful story. Mike.