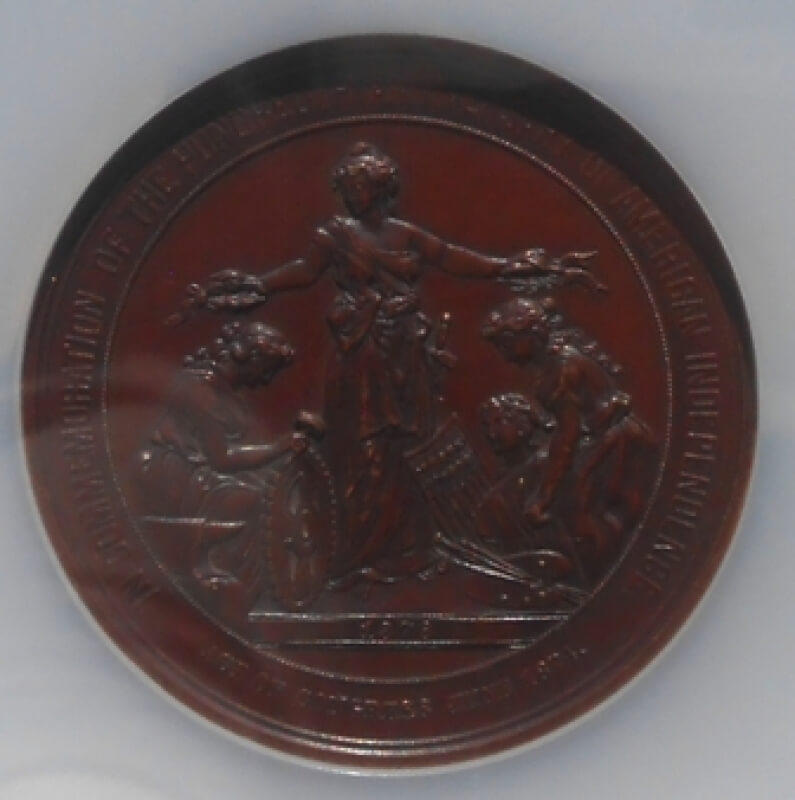 05 Jul 2017
I couldn't believe it when I opened my package from the auction house in which I won this beautiful Medal!   My first thought was it's so big!!!   Especially in the holder!   This is my first Medal purchase and I love it!      Officially it's a 1876 Dated J-CM-11 ,AE 58mm United States Centennial   MS 62 BN... Now that's quite a title   : )      The obverse is Liberty placing a wreath on the heads of Industry and Art with the date 1876 below.    It reads " In Commemoration of the Hundredth Anniversary of American Independence.  Act of Congress June 1874. "     The reverse is Rising Liberty with an unsheathed sword beneath 13 stars in a glory.  Date 1776.  The legend around reads " These United Colonies are, and of right ought to be, Free and Independent States. "  The engraver is William Barber and there was about 7,000 pieces struck in Bronze.   I feel so fortunate and proud to have this Medal in my collection, as the history behind it speaks for itself.  ******* My research came from a reference book that I checked out from the ANA Library.  "Medals of the United States Mint." The First Century 1792-1892    By R.W. Julian

That is truly beautiful. Thanks for the history lesson. I will have to study medal, I see. Thanks again and enjoy!!

Wow, that is stunning. I am sure you are proud to own it. Truly an incredible piece of artwork.

Thanks for sharing your first medal. Hopefully, many more to come.

it is a beauty

That is breathtaking to see. I love the way it has toned too. Very beautiful, Kepi. I can see how happy you must be.

Well that is absolutely terrific. Great win for you. Very impressive medal. It does add to you collection a great part of our history. I'm very happy for you. Thanks for all the history. I tell you we can learn something everyday. Enjoy it. Mike.

Quite and add to you collection.

Ooooh, what a gorgeous medal!! :D I just love the deep red toning, too -- what a beauty. Congratulations!!!