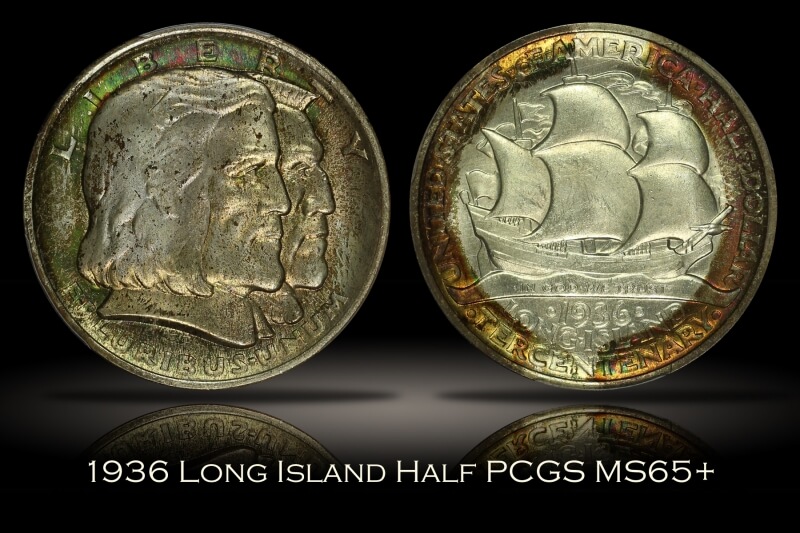 Many things have been written about the United States Classic Commemorative coins from 1892-1954.  Many of the basic facts of the designers, the mintages and of the events commemorated by the coins are easily found and often repeated in various sources.  I have collected the silver classic commemoratives for many years and I am writing this guide to share various facts on each of the issues which I thought were of particular interest.  Some of these facts are well-known, others are not.  Of course, some coins have many interesting facts while others are fairly boring.  The system would not let me upload everything in one post, so I will break up this blog into five parts total, each covering ten of the classic commemoratives.  I hope that you enjoy, thanks!

Although minted in February 1937, the Cleveland Centennial/Great Lakes Exposition half dollars are dated 1936 as the Act authorizing the coins specifically mandated.

The first 200 Cleveland Centennial/Great Lakes Exposition half dollars were placed in numbered and notarized holders which are very collectible today.  In 1941, 100 mint state examples were counterstamped for the 20th anniversary of the Western Reserve Numismatic Club.  In 1971, another 15 examples were counterstamped for the Club's 50th anniversary.

The Wisconsin Territorial Centennial half dollar was not a quick sell out with coins still being available for sale at the Wisconsin State Historical Society into the 1950s.

With its relatively low mintage, the Cincinnati Music Center half dollars were quickly purchased by collectors and by the end of 1936 sets that were initially sold for $7.75 each were selling for $45 to $50.

The Cincinnati Music Center half dollar is one of the coins looked at as one of the abuses of the commemorative coinage program.  The 1886 date on the coin really has no historical significance other than it was a convenient date to use in getting the authorizing legislation passed.  Nothing musical that was worth commemorating on a national coin occurred in Cincinnati in 1886.  It is also arguable that Cincinnati was not much of a music center at any time before or after 1886.  Stephen Foster, who appears on the obverse, was a popular song writer, but his connection to the City of Cincinnati is very weak as he lived there for only three years of his life.  At the time the coin was issued, even within the City of Cincinnati very few people even knew about the Cincinnati Music Center half dollar.  In summary, it is widely agreed that this coin was struck for pure profit and greed.

The Long Island Tercentenary half dollars were not minted until a few months after the celebrations had completed.  Even so, the coins were quite popular and nearly the full authorized mintage was sold.

Because of the abuses of previous commemorative programs, for the first time the authorizing legislation attempted to control the issue of the Long Island Tercentenary half dollar by limiting the coins to having only the date of 1936 and limiting the striking of the coins to a single mint.

The 300th anniversary of the founding of York County, Maine is arguably one of the least significant events that was commemorated on a United States coin.

The designer adopted the modernistic eagle design from the Connecticut Tercentenary half dollar design.  Many collectors believed P.T. Barnum was chosen for the obverse of the coin based on his fame as a showman, but in reality he was greatly involved with the early history and planning of the City of Bridgeport and once served as Mayor of Bridgeport.

The Bridgeport Centennial half dollar commemorates the 100th anniversary of the incorporation of the City of Bridgeport although that city was founded nearly 200 years before that incorporation.

The Lynchburg Sesquicentennial half dollar is another example of the few United States coins to bear the portrait of a then-living person.  Carter Glass, protested against the use of his portrait on the coins but to no avail.  John Lynch, the founder of Lynchburg, was the obvious choice for the obverse of the coin but no images of Mr. Lynch could be found.

The dual dates on the Elgin Centennial half dollar of 1673 and 1936 do not relate to the 100th anniversary of the City of Elgin (which was first settled in 1835 and incorporated in 1847), but instead refer to the date the French explorers Joliet and Marquette first entered Illinois.

Although the authorizing legislation says otherwise, the Elgin Centennial half dollar is more of a commemoration of the early pioneers than it is of the City of Elgin.  In fact, the coins were not issued in or around Elgin, Illinois, but instead were largely distributed through a dealer in El Paso, Texas.  The proceeds of the sale of the Elgin Centennial half dollars were to be used to erect a Pioneer Memorial Sculpture in Elgin, Illinois.  The base of the Memorial had been poured as of 1934, a couple of years before the issuance of the commemorative coin.  The designer of the coin was also the artist working on the Memorial.  Unfortunately, only about $8,000 was raised through the sale of the Elgin Centennial half dollars well short of the approximately $100,000 needed to finish the Memorial.  The Pioneer Memorial was not completed until November 2001, eleven years after the artist's death.

The authorizing legislation for the Albany half dollar states the coin was issued in commemoration of the founding of the city.  However, the city was founded in 1614.  Albany was chartered as a city in 1686 which is what the half dollar is actually commemorating.

The Albany half dollar was not very popular amongst collectors.  The coins remained available for purchase at the original issue price through the mid-1950s.

The California grizzly bear used as the model for the obverse of the San Francisco-Oakland Bay Bridge half dollar spent his life in a cage.  This fact caused some criticism as some collectors felt that a caged bear was not emblematic of liberty and/or freedom.

A significant number of the San Francisco-Oakland Bay Bridge half dollars were sold at the toll booths near the entrances to the bridge.  Despite, selling the coins on a drive-thru basis, many coins remained unsold and were melted in 1937.

Another really interesting blog! Thanks for all your research! ; )

Another useful blog in your commemorative series. Perhaps the Elgin Centennial half dollars lack of apparent proceeds was resultant from the same force of fate as of some of the Old Spanish Trail halves.

Great info thank you for all your work. Mike.

Lots of great information. Thanks!