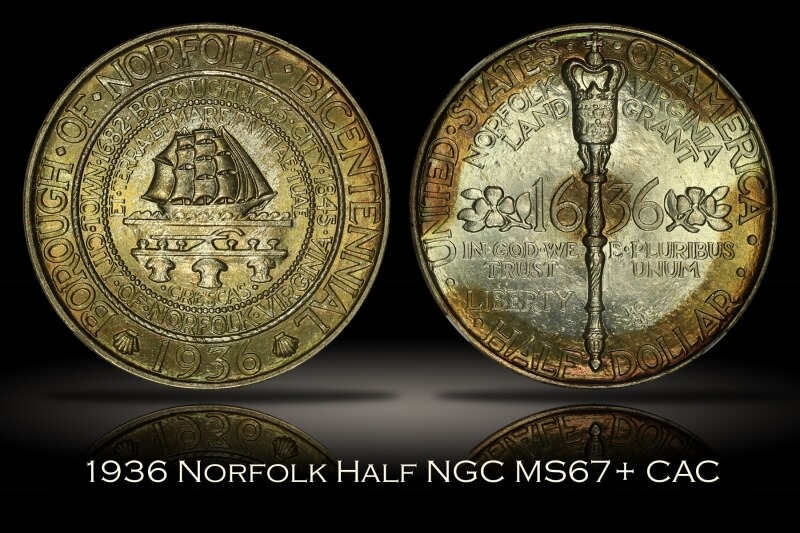 Many things have been written about the United States Classic Commemorative coins from 1892-1954.  Many of the basic facts of the designers, the mintages and of the events commemorated by the coins are easily found and often repeated in various sources.  I have collected the silver classic commemoratives for many years and I am writing this guide to share various facts on each of the issues which I thought were of particular interest.  Some of these facts are well-known, others are not.  Of course, some coins have many interesting facts while others are fairly boring.  The system would not let me upload everything in one post, so I will break up this blog into five parts total, each covering ten of the classic commemoratives.  I hope that you enjoy, thanks!

Of the many commemoratives authorized by Congress in 1936, the Columbia Sesquicentennial half dollar was the first one authorized, but was the last struck that year and well after the festivities related to the sesquicentennial had taken place.

Six sets of the Columbia Sesquicentennial half dollars were sealed in time capsule which was opened in 1986.  The sets were marketed and sold for several thousand dollars each.

The Delaware Tercentenary half dollar was authorized by Congress in 1936, struck by the U.S. Mint in 1937 and was issued to commemorate an event celebrated in 1938.  The date of the coin confused collectors from the beginning and advertisements selling the "1936 Delaware," the "1937 Delaware" and the "1938 Delaware" could be found, even though all were selling the exact same coin.

In 1938, Sweden issued a similar commemorative coin for the 300th anniversary of the Swedish settling Delaware.  The coin also has an image of the ship that carried the first Swedish colonists to Delaware in 1638.  Some American coin dealers obtained quantities of the Swedish commemorative to promote as a tie-in with the Delaware Tercentenary half dollar.

The Gettysburg half dollar was authorized by Congress in 1936, struck by the U.S. Mint in 1937 and was for the Blue and Gray Reunion held in July 1938.

Surprisingly, the Gettysburg half dollar was not very popular amongst collectors as nearly half of the authorized mintage was subsequently melted.

The Norfolk Bicentennial half dollar was not authorized by Congress until 1937 and the coins were not minted until late that year.  Notwithstanding, the coins bear the anniversary date of 1936 which commemorates the 200th anniversary of the establishment of the City of Norfolk as a borough and the 300th anniversary of the original Norfolk land grant.  In total, the coin bears five different dates: 1636, 1682, 1736, 1845 and 1936, none of which are the date of mintage.

At the time the Norfolk Bicentennial half dollar was issued, there was some public outcry regarding the inclusion of the British royal crown in the design.  However, the crown shown is part of the City of Norfolk's historic mace.

The Roanoke Island half dollar was one of the few commemoratives which had no maximum authorized mintage in the authorizing legislation.  However, by the time the Roanoke Island half dollar was issued, collectors were already getting burnt out by the many commemorative issues for the commission in charge of the coins to take advantage of an unlimited mintage.

The New Rochelle half dollar was initially sponsored by a local coin club, the Westchester Coin Club of New Rochelle, New York.  But Congress ultimately required the sale of the coins to be handled by city officials through local banks.  That said, prior to the melting of the unsold New Rochelle half dollars, Westchester Coin Club members were permitted to purchase coins at face value and some members purchased hundreds of examples.

As was the case with a few other commemoratives of the time, the New Rochelle half dollar was authorized in 1936, struck in 1937 and dated 1938.

By order of the Governor, 500 examples of the Iowa Centennial half dollars were set aside for the State's 150th anniversary (1996) and another 500 examples for the State's 200th anniversary.  The 500 coins set aside for the 150th anniversary were placed into special holders and were sold at $500 each starting in 1992.  Since the final 500 Iowa Centennial half dollars will not be distributed until 2046, the distribution of the coins has technically not yet been completed.

Despite having another 12 different date and mintmark combinations, the Washington-Carver half dollars were also not popular enough to sell out the entire authorized mintage of the Booker T. Washington Memorial half dollars.  A large number of coins were ultimately sold for face value while others were simply placed into circulation.

Some eagle-eyed collectors believe that the reverse design of the delineated map of the United States unintentionally omitted the State of Delaware.

Great blog! Really enjoyed it! Thanks : )

This has been a nice read through your 5 sections on the commemoratives. Very informative. Thank you.

I enjoy reading about those.One of my first buys was a commen. Antietam. I saw the reverse and said I was on that bridge! Sure enough had to have it been hooked on the old ones ever since. I still will buy one if I know I don't have it. Thanks very much on your writing about coins I really like. Mike

Great blog. Very well researched. Thank you for all the info!!

Thanks for the nice comments and glad you like the blog posts. I put the information together for a presentation for my local coin club a couple of years ago.

Great details. Thanks for the efforts to put it all together!

Nice blog. I feel fortunate to own an example of both Delaware coins that you mention. The Swedish coin is a lot more reasonably priced than the US Commemorative.