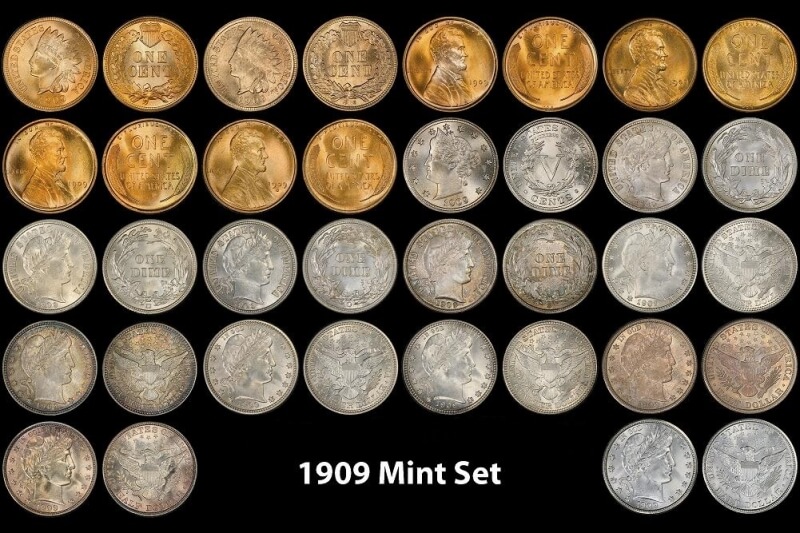 Overall, the 1909 Mint Set is a great and challenging set to collect as it was a very special year for U.S. coins. Most notably, it was the year of the transition from the Indian Head Cent design to the Lincoln Cent design. That transition, combined with the subsequent controversy over the V.D.B. initials on the Lincoln Cent, resulted in six different business strike cents to collect for the year (plus several varieties). This was also the second year of cent production outside of the Philadelphia Mint and the final year of coin production at the New Orleans Mint. Several of the coins of this year are famous key-date coins and a few others are well-known semi-key dates. Additionally, several varieties exist on the 1909 issues, many of which I have included in the photos of my set below. Please feel free to contact me with any questions or comments. Thank you for looking!

That is a really beautiful collection!

Thats nice! Wish i had the money to complete a set like that. WL

Amazing! Is this collection yours?

Wow! Just beautiful! Thanks for sharing with us! We did go to that show and it was wonderful!

Wow! you must feel accomplished!

This was his set. His set. Read his comment.

While it isn't exactly easy, this collection isn't too difficult if you have some time (a few years) and some money. Of course, the more money you have, the easier to put this collection together. I would guess that 75% of them could be bought pretty quickly in these grades (or even better) within a few months if money was no object. There are couple of tougher dates that just don't show up as often, like the 1909-O Barber Quarter, that might slow down your progress. The cents required for this set are almost always available on the market, even the key dates. But if you want to be very picky in holding out for really nice and eye appealing examples of those coins, then the wait will be longer. I plan to have this set on display at my table at the August 2016 ANA World's Fair of Money in Anaheim. Hope lots of folks come out to the show to see the set and the many other attractions at the show! Mike

Now that is one tough collection to put together!!!