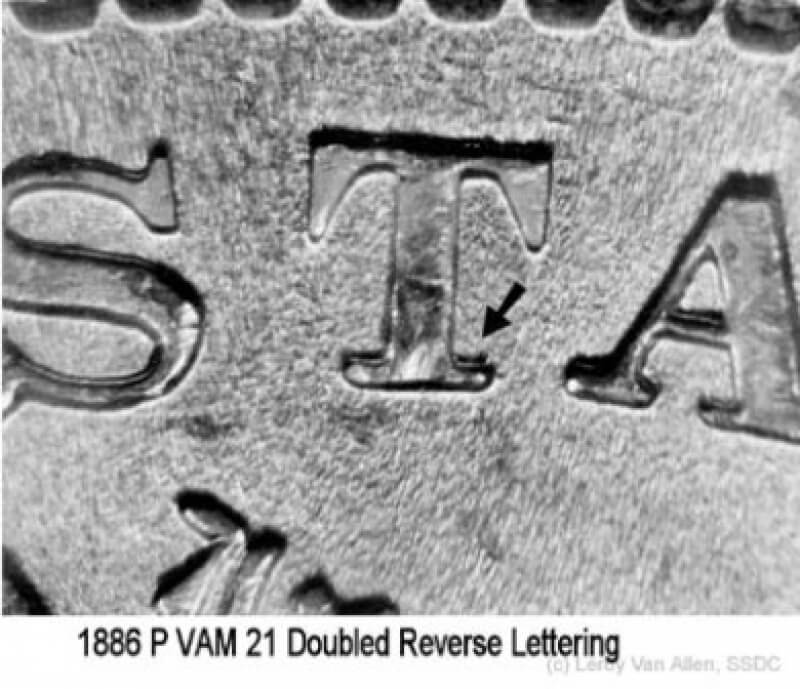 27 Sep 2017
Below are photos of another Morgan dollar from my VAM collection. It is a 1986 VAM-21. It has some nice dark toning and is a Top-100 in the VAM community. This particular VAM can be seen with the naked eye, on nicer grades. This one needs the help of a loupe due to the toning. One of the things that make it a VAM is on the obverse, what used to be thought to be  a gouge in the"M" in Morgan's signature. It was latter determined that the gouge is in fact a MPD, misplaced digit, the bottom of an "8". Additionally there is quite a bit of doubling on the reverse. This includes  doubled "TED OF AMERICA", "AR" and "IN GOD WE TRUST". Then is, at least, tripling of the "ST" in TRUST, as well as right star and right upper wreath leaves are doubled toward rim. As a side note, this VAM was originally designated a VAM-1. This was when the MPD was thought to be simply a die gouge in the "M" in Morgan.When it was later determined to be a misplaced "8" it was reassigned as a VAM-21. Just a little VAM history and loar. Things are always being checked and rechecked. This probably isn't the most beautiful Morgan,to most people, but I love it as it speaks to me. So much history and so much research. I hope you find it pleasing and learned a little more about VAM's. I look forward to your comments. Thanks for looking.SOURCED: www.vamworld.com
COMPREHENSIVE CATALOG and ENCYCLOPEDIA of MORGAN and PEACE DOLLARS-by Leroy C. Van Allen & A. George Mallis-4th Edition                                          1991

that is a great and extraordinary coin

That is quite a subtle variety. Photos are clear.

Nice VAM, Longstrider! This post reminded me of one of my favorite "sleeper" VAMs out there; the 1892-O VAM 12 and 12A varieties (Check it out on VAMworld; cant' post a picture of one here.) If memory serves correctly, I think that in the entire Morgan dollar series, these 1892-O varieties have the largest spread/distance between the actual date placement and the misplaced location, which is right in the 'vee' of Ms. Liberty's hair, directly above the date; the bottom portion of the "9". With these, as well as your beautiful 1886 VAM 21, many people argue that they are just die gouges, not actually misplaced dates (but then, you have to think about what other processes could have possibly been responsible for those "gouges", other than an errant placement of a date digit punch.) At any rate, great coin and post, and thank you for sharing; awesome original toning! --Sam Gelberd, ANA Numismatic Educator.

Interesting blog and beautiful coin! I know you like VAM's. You sure picked up a nice one here!

Great photos. Thanks for letting us look at them.

Great pick up. Wonderful coin . There seems to be so many varieties you would think they would of taken more care of this coin. It was very important to us. Just because they were made for circulation don't treat them like a piece of metal . There ninety percent silver in these beautiful coins. Thanks very much I did enjoy reading it very much. And the pictures speak for themselves. Great job Mike.

Thanks Mike. It does get a bit rough when enlarged.