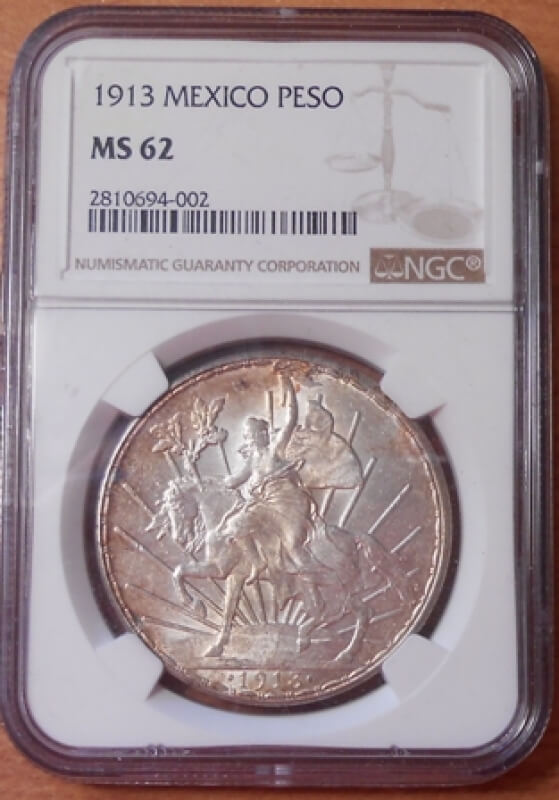 17 Apr 2017
Here is my new example of  a 1913 UN PESO CABALLITO! Also known as "The Little Horse Peso" or "Liberty on Horseback". If you enjoy Mexican coins you have probably heard of this one. A little on it's history. The coin was struck  from 1910-1914. It commemorates Mexico's 100th Anniversary in its War for Independence from Spain! The coin weighs 27.07 g and has a diameter of 39 mm of .903 silver. The Caballito was designed by the world famous French medalist, sculptor and coin designer Charles Pillet. The Lady Liberty is riding her horse, side saddle, while holding up the torch of Freedom in front of a rising sun on the reverse. The obverse features the Mexican Eagle perched on a cactus with the snake in its' beak. The edge of the coin is incused with lettering that reads INDEPENDENCEIA Y LIBERTAD.
Just as the $20 Double Eagle by Augustus St. Gaudens is considered one of the USA's most beautiful coins, The Caballito is considered one of Mexico's most  famous beauties! Having it in hand, I have to agree. This particular example has a nice rainbow toning going on! There are a number of varieties in this masterful short mintage. I leave these for the curious reader to look up and discover. Thank you for looking and your comments in the hopes that you appreciate the beauty and history of this treasure!
I encourage the reader to check out the other works of Charles Pillets!
Sources:
MEXICAN BEAUTY/BELLEZA MECICANA Un Peso Caballito by Allan Schein
MEXICAN MONEY Volume 1 by Don and Lois Bailey
https://en.numista.com

When your talking Mexican coins your talking hundreds of years of art before St. Gardens was even born. Your comparing Apple's and oranges.

Just beautiful! Love how it starting to tone. I especially like your comparison between our Double Eagle and Liberty On Horseback! Thanks for sharing this one!

I love your blogs. They are the epitomy of "conversational" style of writing (my favorite kind). And wow, such a beautiful coin. I have never seen, or noticed at least, Liberty up on a horse before. And riding like a lady too, don't ya know. Pretty cool! I love Mexico's rich cowboy history. Beautiful blog, once again.

Now your talking a piece of art. Congratulations on such a pick up. When you pull the trigger you don't kid around. I guess you figured I like it alot. The history is terrific and is great to know but I would rather hold the coin. Enjoy it very much. To think that coin was made in the oldest mint in the western hemisphere is remarkable.Mike.

That is a beauty. Mexican coins are lovely and make a great collection, esp the silver coinage.

This is a very pretty coin! It's simple, yet every detail is meaningful. Thanks for showing this to us!

Thanks for the blog. It is a nice looking coin.

Wow! This is quite beautiful. Thanks for tell us about it.