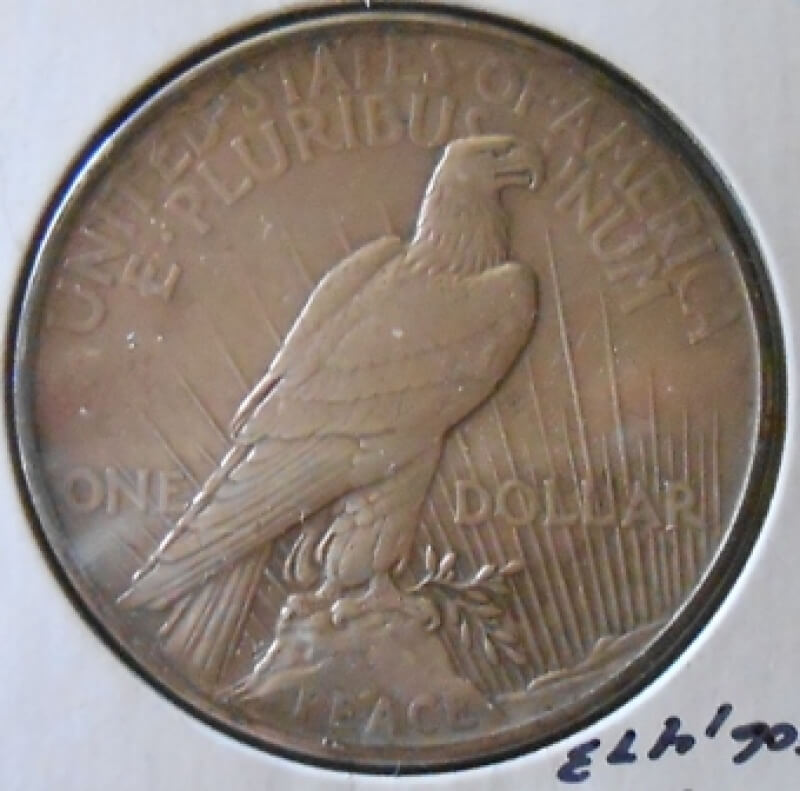 25 Sep 2017
I am going to try to show something that is almost impossible, given my equipment. In the photos below, you will see an example of a circulated High Relief 1921 Peace Dollar. I am attempting to show the high relief aspect of this coin. This isn't easy, especially with a circulated coin. I took the one shot at an oblique angle. You can mostly see the depth of strike at the base of Miss Liberties neck and chin. In 1921 the Peace Dollar hit the public. They were actually minted in the last few weeks of December of 1920. Struck in high relief it quickly became evident that this wasn't going to work out. Beside being difficult if not impossible to stack, The die life was to short to make it acceptable to the mint as was the slow speed they could be put through the high-speed presses. Because of the these issues, most '21 Peace dollars were struck with weak centers on both sides, as well weakly struck Hair on Miss Liberty in an attempt to make the dies last a bit longer. With a mintage of only 1,006,473 the 1921 Morgan dollar was reintroduced to fill in the slack. This fact led to the only Morgans minted in Denver. This was a great idea from the powers that be, although there were countless millions of other date Morgans moldering in bank vaults and it wasn't needed to meet the public's demand for more silver dollars. I hope the reader can at least get an idea of the relief. Thanks for looking and, as always, your comments.
SOURCED: Silver Dollars & Trade Dollars of the United States- by Q. David Bowers 2006

The 1921 Peace dollar is one of my favorite coins. Thanks

Nice job on the photos. High relief coins are some what hard to come by.

Great Coin I was in the right place at the rig h time. .You enjoy that . I know you will there hard to find. Sometimes you just have to get lucky. Good for you. Mike.

This is a beautiful Peace Dollar!!! Your photo's are amazing! I can see the high relief...I bet that would make them hard to stack. : )

Good photo! The 1921 Peace $1 is a type itself but is not usually recognized among type collectors. There are a few 1922 high relief. I recall many years ago, one was offered for sale in the classifieds of Numismatic News.