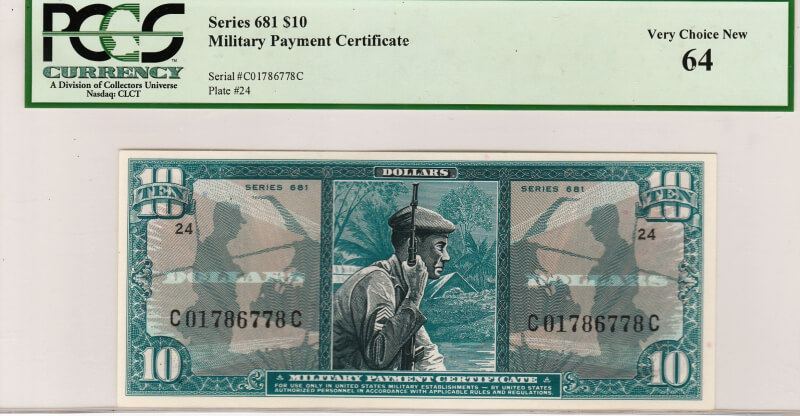 † †I have seen several blogs about different ‚Äúholy grail‚ÄĚ coins or currency. I thought I would show you one of mine. Last week I was lucky enough to win an auction lot at Heritage. If you have never been to one of their auctions you should check them out at ha.com. They have quality items and many, many auctions.

†† This particular auction was all MPC, Military Payment Certificates. To my surprise they had three lots of my favorite MPC, the Series 681-$10 note. After putting in a low bid on one of the lots, I watched for over a week as the bids slowly climbed. It turned out that I wouldn‚Äôt be home when the bidding closed and went live so I upped my bid to my maximum. Low and behold I somehow won the auction.

†† The amazing thing is that this particular series note and denomination seldom comes up for bids. As you can see in the photos this is a very cool note. The Series 681 was issued 11 August, 1969 until 7 October, 1970. This was the third series of MPC‚Äôs to be used exclusively in Vietnam.

†† The ten dollar note, on the front or face shows an Army Special Forces master sergeant with his M14 rifle in hand. In the background are a jungle village, two soldiers, and a Shawnee CH-21 helicopter. On the back is an M48A4 tank in action.† Almost the entire run of this series depicts contemporary military themes. Something most of the other series do not do.

†† Since I started collecting MPC‚Äôs I have wanted one of these ‚Äútank‚ÄĚ notes. They are so rare and expensive I never thought I would get one. Well the hunt is everything and by not giving up I found one I could, almost, afford. I don‚Äôt usually bid on a MPC on a PCGS holder. They are very large and do not give the info that PMG slabs do. Maybe someday I can have it reslabed by PMG. However after the nightmare of that POW chit lost in the Registered mail, I may hold off for a while.

†† I hope you enjoyed this little story of mine. Please check out the photos and feel free to leave comments and questions. Thank you!

Very good looking note, wish I had one!

But I do see a lack of info on the slab.

I also think the tank design is really cool.

Great story, kept short and to the point.

Patience, as they say, is a virtue. Congratulations, well deserved.

I'm so happy for you! This is an amazing note! Love the tank! You should go for this whole series... ; )

Great blog! Congratss on the auction

That is a Beauty, I am so so jealous as I have loved Tanks since I was a Kid. In fact right next to my PC, on the other side of my Printer sit a Panther and Tiger 1 Tank. Thanks for sharing your prize. Now on to the next Grail.

Very nice. Everytime I see a new item like this, I want to collect them and look for them. Great area to collect.

Great note! I almost never go do or buy at auctions. They always go for crazy prices because people get exited and bid a lot more than the thing is actually worth. But anyways I‚Äôm you got that great note!

Awesome John, I'm so glad you fought for it in the auction and then again against the USPS. Great job and great perseverance!

A very pretty military certificate! If only our paper money could have some spiced up reverses instead of a bunch of buildings that basically all look the same. ūü§Ē Just my opinion. Thanks for sharing.

Along with many other stories written in different styles yours brings up a view from your own perspective . Nice blog . Like others . Thanks for sharing .

That's a beautiful note. I mean you look at it and it tells a story immediately. Great shape. You bid wise . I have won many things at HA. And I have been asleep and won. I put my last bid in and let the cards fall were they may. I like the sleepers. Hundreds and hundreds of items and you find the one your looking for and no one else does. Great story. You have a great collection.! Keep them coming. !