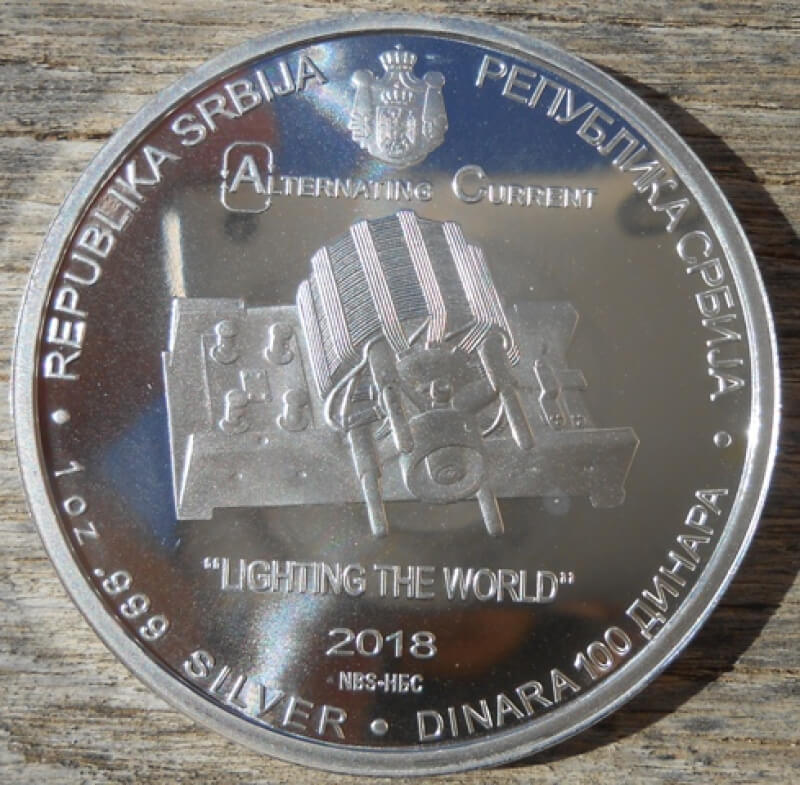 This new blog is on, probably, my greatest hero outside of my immediate family, Nikola Tesla. The coin is one ounce .999 fine silver minted in the Serbian Mint for 2018. It has a 39.0 mm diameter. It has a value of 100 Serbian dinara. The total mintage is only 50,000.

Featured on the obverse is a portrait of the inventor at the approximate age of 40.His name is above him. It is inscribed in both English and Serbian Cyrillic. Under his portrait is the legend “ELECTRICAL VISIONARY”, then a lightning bolt. Below that is inscribed “POWERING THE FUTURE”.

Centered in the middle is a picture of Tesla’s induction motor, with the Serbian Coat of Arms top center. Below that is inscribed “ALTERNATING CURRENT” above and “LIGHTING THE WORLD” and “2018” below. Also inscribed are the words “REPUBLIKKA SRBIJA”, 1 OZ., .999 SILVER” and “DINARA 100”.

The man himself has a varied and remarkable history. From the moment of his birth in 1856 during a lightning storm, to his questionable death on January 7, 1943 he led a mysterious life and career. He is most notable for inventing the A.C. motor. He was caught up in a war between Edison and Westinghouse. He was taken advantage of by both men and died penniless instead of the rich man he should have been. He had hundreds of patents and scientific awards to his credit.

It has been theorized that he received help from aliens, as he was such a prolific genius. On the day of his death many cases of his notes were taken by the FBI. To this day not all of them are accounted for. The reader should research him themselves as I will go off on a rant.  He also was working on limitless, wireless, free electricity and a so called death ray, at the time of his death. Remnants of these can be found in Colorado Springs and New York.

I better stop now. Please look at the photos below and comment on this blog. Thanks for your time.

By the way, for something REALLY interesting check out Tesla's "Earthquake Machine".

Its a shame how Edison pushed Tesla aside and took credit (not to mention profit) for what we know of electricity today. I have an Edison commemorative dollar, but its great to see Tesla get his numismatic due as well.

I've been wanting one of these since I first heard about them a couple of months ago; might have something to do with the fact that I live in Colorado Springs - Nik Tesla spent a little bit of time here doing some stuff; such an underrated genius! -Sam Gelberd, ANA Numismatic Educator.

This blog is really interesting to me. If it weren't for the car I'd have never heard of Tesla. Apart from the coin, I learned something today :)

The fact that he died penniless does bother me to a point. It's why nothing has been released. Under the freedom of information act the government was smart enough to exclude anything that may or maybe dangerous to the security of the U.S. Therefore it will take an act of Congress to get anything released. That's what bothers me. And the credit he should of received. I have heard of him . But it seems that's about all there going to allow us to learn. Welcome to the land of the free. Great blog. Thanks for that. Mike

A truly world-altering man. You hit it right on the head. There is lots of information available on Mr. Tesla for someone that wants to find it.

Interesting story, nice coin too. I have to learn more.

Nice blog, maybe you can get a Tesla car added to your collection. ha ha

A very attractive coin and a great subject. He was truly a giant and it saddens me to hear of his penniless state in later life. It reminds me, in the comic book world, that Bob Kane got all the credit for creating Batman but Bill Finger actually created the look of Batman that we know today. Like Tesla, Finger was swept aside and died impoverished and did not get the recognition he deserved until after his death.

Great blog Longstrider! Really enjoyed your passion for Tesla! What a mind that man had. Amazing. Great looking coin too! Can you imagine a world with free electricity... no wonder "they" "shut him down. Sad really.

I love Nikola Tesla , apart from his parrot he married. Too bad Edison stole most of his ideas. Thanks for the beautiful coin