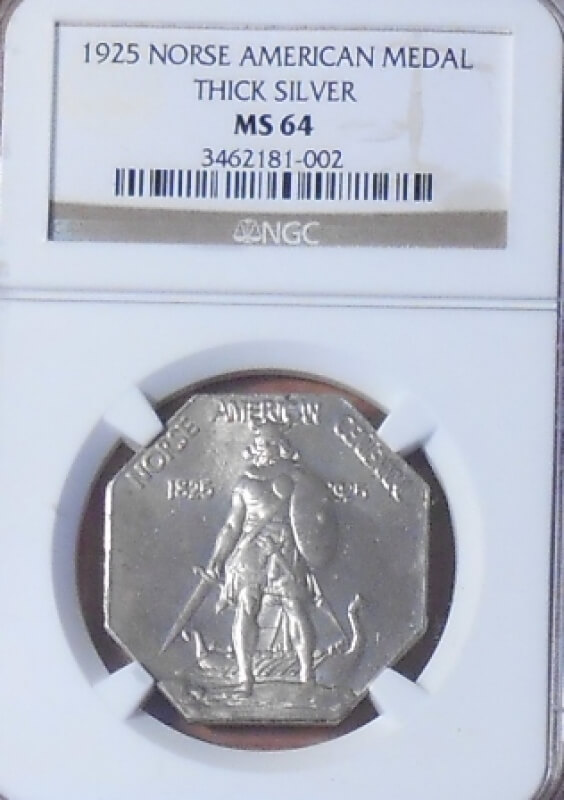 01 Jun 2017
Here for you to enjoy, I hope, is a 1925 Norse American Medal-Thick. I have been lusting after this medal for quite a few years. I was never able to find an example that I liked and could afford at the same time. Well my luck held and I found this at my regular coin dealer this last weekend. Now I love my guy but he isn't cheap. That's O.K. 'cause I know it and he gives me tons of knowledge and advise and some other perks.. For some reason this medal was in my price range and grade a MS 64. Well above a grade I hoped to obtain. The medals were struck to commemorate the anniversary of the Restuaration, which brought Norwegian immigrants to the United States a century earlier. The medals came in different sized planchets, thick and thin. There were also some made in gold but most gold ones were melted down. The thick ones have a mintage of 33,750. The medal was designed by James Earle Fraser in .900 silver. My example also has a bit of toning that didn't come through on the photos. Looking forward to your thoughts. Thanks for looking.
Sourced:  NGC.com

Thank you for this info on and the images of this work of James Earle Fraser.

Beautiful coin. Thanks for sharing.

Great find! And all the better that you've been looking for one for so long! It's really beautiful! Love the Viking! : )

That is amazing!! I am not at all familiar with this area of collecting. Medals authorized by Congress. Super cool item! I wonder if there is significance in the way it is shaped?

Thank you all for looking and your kind comments!

That is a beauty. This is another piece of numismatics that does not get the publicity it deserves. I think there was a reference book on so-called dollars years ago, never updated.

There is no feeling like finding the coin you want after a long hunt. Congrats!

Congratulations! The Norse American Medal sure has a lot of stories in its making.

That's a beautiful piece. I don't believe I have ever seen one. Guess I will have to start looking.

Great looking coin. It's very nice and historic. Feels good to finally get a coin you had wanted for a while. It's a great feeling. Enjoy it my friend. I know you will Mike.

ah the vikings, thanks for sharing