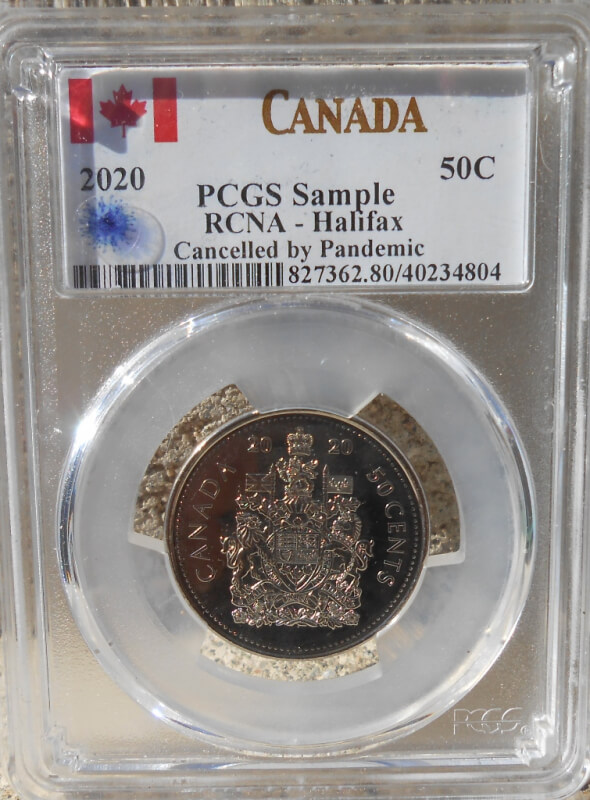 The other day I received this kinda cool, kinda sad coin in the mail. Thanks to a fellow member here with strong likes for Canadian coins and The Royal Canadian Numismatic Society, I was told about these unique slabbed coins and was able to order one. As you can see in the photos this is a PVGS Sample slab with a Canadian 2020 fifty cent coin in it. The label states that it's from the Royal Canadian Numismatic Association Convention, this year to be held in Halifax. As is stated on the label, it was "Cancelled by Pandemic". Another one bites the dust.

The coin slabbed is a 2020 Canadian non-circulating fifty cent piece. It is a nickel steel composition that has a 27.13 mm diameter. It features the coat of Arms of Canada divided by the date above. As always the obverse is a portrait of the Queen facing left. The inscription translation to "ELIZABETH II--BY THE GRACE OF GOD". Below Her portrait is what I think is the mintmark for the Royal  Canadian Mint Winnepeg mint. Maybe not. Here is a quote from the Royal Canadian Mint about the new Mint mark. "The Mint Mark encompasses the three elements of the Mint's corporate name: M for Mint; a Maple leaf for Canadian; and a crown for Royal and Crown Corporation. It features the Mint design within a circle and consists of a symbol depicting a stylized maple leaf emerging from the letter M. The eastern and western points are upturned and reduced in width to suggest a crown. A majestic M unifies the design, symbolizing the word "Mint" and its French counterpart, "Monnaie." With their conic shape, positioning and spacing, the two components of the design evoke the action of two dies striking a coin."

These Sample slabs were to be given away as convention souvenirs but were instead sold for a small price to the public. The limit was to be only 100 coins but I believe more were sold. Sample slabs from all the TPG are collected by many people. I thought this was a very good example of 2020. Everything, mostly, was closed by pandemic. I think the blue sticker on the bottom left of the slab is supposed to be the covid molecule.

Well I reckon it's a good idea and tries to make something out of a closed major show. As of this writing they are still shown on the RCNA's website. I don't have much else to say and hope you enjoyed this small blog on a shot at making some small good out of a failed show. Oh Canada!!

That is a really nice slabbed coin. If memory serves me correctly I believe the 50 cent piece was the first coin minted by the Canadian Mint. So good choice of denomination for the coin too.

A beautiful coin! I love this design of canadian coinage. Thanks for sharing! Cheers, NM

Awesome! A truly unique piece to have in one's collection. So glad you acquired one as they were in limited numbers.

Well, that's a shame. Nice sample slab though. The Indiana State show is still scheduled for the first week of December. Fingers crossed.

That is a nice coin! It is beginning to look like the late November coin show in Las Vegas might be either canx or scaled way down. Covid cases are on the rise again here in Nevada & they are starting to make noises about closing everything up again. Hang in there folks, and Longstrider, you have a heck of a nice coin to remember this "Time of Suck". Thanks, Later!

The CK Show is not looking good.

Tell us about the privy mark, it that a crown?

It's been added. Thanks.

Can we vote to start 2021 tomorrow? Oh well :( France is issuing a two Euro coin commemorating medical research. The obverse has the face of a researcher in a globe looking over several strands of DNA. This coin is phenomenal. I got to get them! They come mounted in three different collector cards. France was to issue a two Euro to commemorate the 2024 Olympics but suspended it in favor of this one. Follow this link. https://www.monnaiedeparis.fr/en/shop/coins/medical-research-thank-you-2eu-commemorative-coin-2020-brilliant-uncirculated-quality

I purchased two of the 2020 RCNA show samples. They are a nice collectable regardless of the circumstances.. Sorry for the show being cancelled though. Sample slab collection started now ! I have a few, so I must be a sample slab collector!

Something to look back in the future on what could have been.

I am starting to feel like 2020 is the longest nightmare ever. But at least RCNA can make a little lemonade out of this lemony year. Thanks for sharing your latest acquisition,. That is indeed the mintmark of the Ottawa mint. https://www.mint.ca/store/news/the-mint-makes-its-mark-on-canadian-currency-all-circulation-coins-to-bear-new-symbol-5800018

I was right. Just a guess on my part. Thanks, I'll add this.

Great label! A sign of the times for sure... Right down to the Covid molecule. Nice addition to your collection! Thanks for sharing it!

I have the coin. Not this year's but one from a past year. So another show was cancelled. Someday they will be back. The dealers will be there and the coins and we will be there.