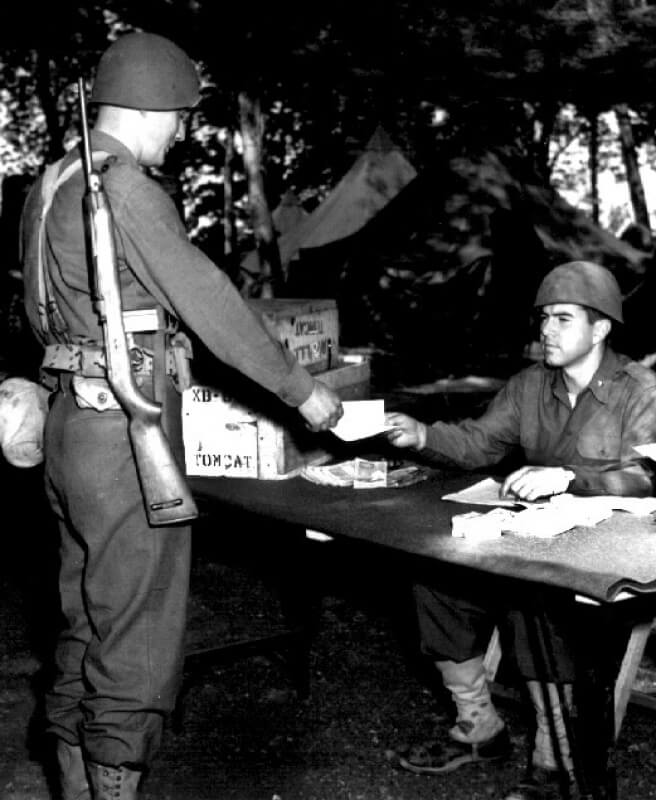 Ā ĀAs most of you know, I hope, today is the anniversary of D-Day. 6/6/1944. The entire operation was code named Operation Overlord. I would like to discuss an operation most of us don't know about.

ĀĀ Operation Tom Cat was the military's code name to get French currency notes into every serviceman's pockets. Most of these notes were printed, in secret, by Forbes Lithograph, and BEP, the Bureau of Engraving and Printing. They came in denominations of 2, 5, and 10 Francs. The two Francs was the most popular because of its small size, 78mm X 67mm, and square shape. Countless numbers of them were put in envelopes and sent home as souvenirs.

ĀĀ After the invasion, these new notes, with "Printed in France" on them, were a perfect replacement for the German issued currency. Pictured below are photos of Operation Tom Cat notes being sealed and boxed up in Massachusetts, one of the boxes on a pay table being issued in England, a two Francs note, a five Francs note, Forbes Lithograph logo, and the end label of a 5 francs note box.

ĀĀ Today is the anniversary of a great and bold plan to secure peace by helping to end WWII. This tiny blog features and operation that in its own way help to that end. I hope you enjoy it and do some further research. Thanks to all who serve and have served. God bless you!

I learned something new, thank you John

Very interesting, I never knew about Operation Tomcat. Thanks for sharing your knowledge and your research.

Thanks for the blog on an important date.

Yet another fine blog subject. Hailing from a strong military family, I would get a boot up my..... if I ever forgot this date. Thanks for the education.

Really good blog for an important day in our history. The photos are great! Thanks Longstrider! ; )

Great blog , interesting , nice bills . Remember the day thanks for doing this for all .

Thanks for that information. I remembered what day it was. I will never forget those brave men pinned on that beach. Great pictures of some nice notes. Thanks for the information. I'm sure many of us didn't here about that plan! Now we know great blog.