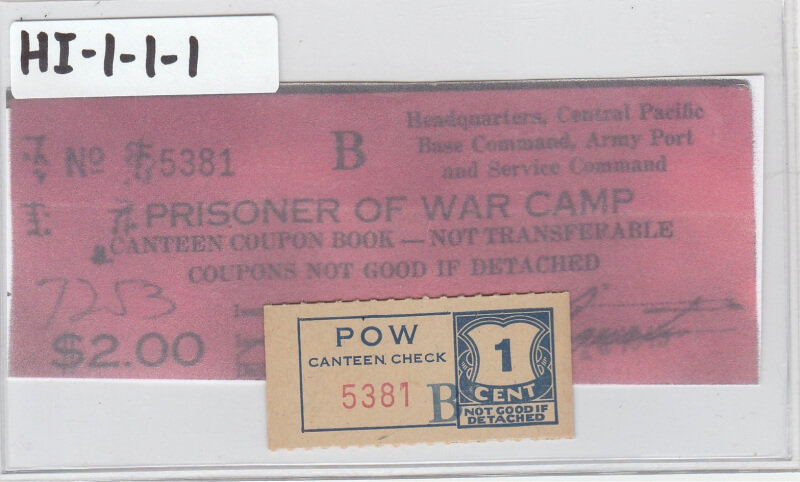 This Prisoner of War, POW chit, has a tremendous amount of USA history associated with it even though it is tiny in size. It is for the canteen in Hawaii used to house prisoners of war during World War II.

The camp was on Oahu. It was designated the Central Pacific POW Camp or Camp 1. Opened in 1943, it housed 4,000 Japanese soldiers. Most of these soldiers were conscripts from Okinawa. Personally I happen to know a couple of folks from Okinawa. None of them think of themselves as Japanese, they are Okinawans'. Besides that mess, most of the soldiers were Korean conscripts that were captured on Gilbert Island in November 1943. It wasn't until later in the war prisoners from both the Pacific and European theaters were at this camp.

The camp was located in Honouliuli near the town of Waipahu. Besides the prisoners of war, the camp held 300 internees. These were people, USA citizens; mostly of Japanese descent that the government was afraid would perform acts of treason if they were not confined in camps such as these. No such acts were ever attempted. Most of these folks lost everything they and their families had worked for. Once the war ended they were released and able to travel back to the houses and businesses they no longer owned. The same treatment was used on German and Italian families but at a smaller degree.

On 19 February, 2015 the camp was made a part of the new Honoliuli National Monument. A small tip of the hat to the suffering the US citizen internees suffered. Please check out the photos below. I have added a scan of the booklet the chits themselves came in. It shows the camp designation since it is not on the chits themselves. This is not how they were commonly printed. Usually all the camp info is on the chit itself. I also have included a photo of a Japanese Monument dedicated to the suffering of the "Internees" and creating a network to link all similar sites.

The numbers on the envelope holding the chit are the ID references used by collectors of these chits. The first thing is the state the camp was in. In this case it is HI. Next is the base camp listed in the table for the state in question, 1. The third number is the chit type. Usually it is 1-5. In this case there is only 1. Lastly is the denomination of the chit, 1 as in one cent for this chit. The dimensions of this chit are approx. 2" X 1". My chit has blue ink printed on tan paper. The serial number is done in red ink. The block position is "B". The serial number is 5381. All of these POW chits were printed by private contractors drawn up between the camp administrator and the printer. This one was printed Kansas Bank Note Co. of Fredonia, KS. The back of this chit is blank.

I hope you enjoyed this blog and learned something from it. Please feel free to comment. Thanks.

Quite refreshing to read about non-coin topics. Especially one's with such passion put into them.

What a remarkable piece of history. I know that Japanese soldiers rarely allowed themselves to be captured so it makes sense that many of the prisoners were Korean or Okinawan conscripts as those press-ganged into service rarely support the cause. You are correct that most Okinawa's, even today, think of themselves as separate from the Japanese nation. So I am going to hoist an Orion Biru to my gaijin friend Longstrider Thanks for sharing, you are truly ammassing a great collection of MPC and associated ephemera.

This comment means a lot coming from you. Thanks Cuz M. I salute you back with a cold, frosty Moretti.

What a great acquisition!

Fascinated with your blog and pics. It is an honor to hold such historically valuable item. Still, as it belongs to an era of uncertain wartime, it is of tremendous collectible value, even for archival purposes. Thanks.

Learning from you blog. thanks

This history is amazing. Thanks for explaining it so well. You really have a nice collection going on! Thanks for sharing these and the great photos! **Wishing you a Speedy Recovery**... I'm not quite sure how you wrote this with just having shoulder surgery. You are definitely a true Numismatist! ; )

Great blog . It was sad what they did to the families but I guess they had to do it.Great shots! This was a big part of our history. The fact that these are still around are remarkable. You were not the only one to learn from it. Who ever reads it will also. I know this took allot of work thanks for that! I learned allot from these . I hope you continue with these. Thanks I enjoyed it!!