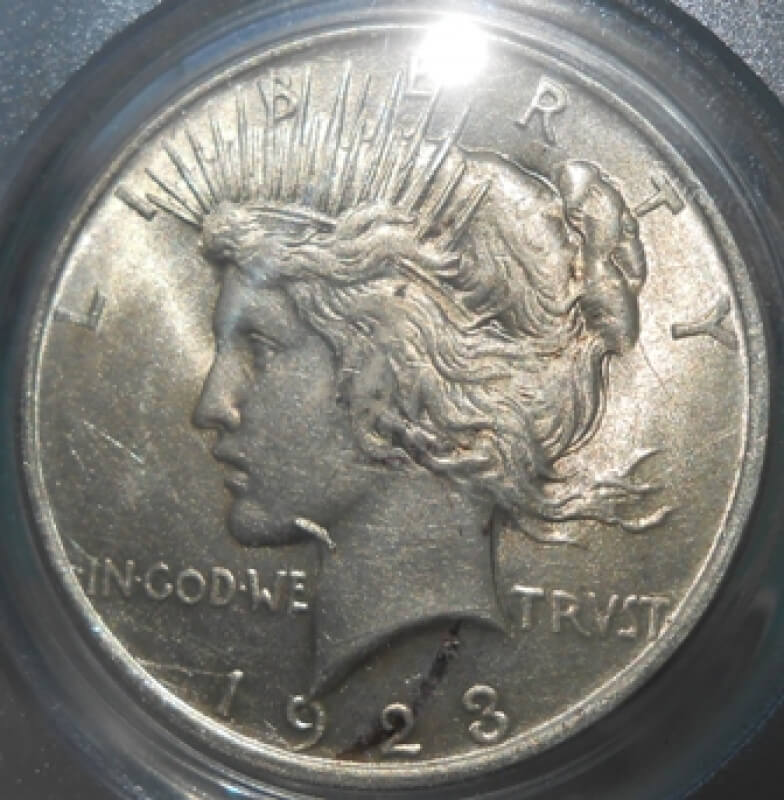 09 Nov 2017
Unlike Morgan dollars that have die breaks starting at the rim, Peace dollar's usually break in the middle of he coin. In this case the break came at the stress point between the neck and the jaw. My specimen, a 1923, is a fairly late die state, "LDS" of the four, making it a nice example of the VAM 1-A. The "Whisker Jaw". This particular VAM has made the Peace dollar Top 50. In this case that means the break is visible with the naked eye and a desirable variety to collect. That's all the Top 50 is, basically. Peace dollars were made from 1921 through 1935 with a pause between 1929 and 1933. There is also a never ending rumor that some unknown number were released in 1964. An unknown number, about 322,394, were trial minted in 1964 Denver but all were melted???? Anthony de Francisci  designed the coin using his young wife Maria Teresa as his model. The Peace dollar was made to mark the end of "The War to End All Wars", WWl, and usher in a period of peace. There is much to learn about this coin and all it's many varieties. I encourage anyone interested to research it. The info is easily available and very interesting. My coin has just the start of some golden toning on the reverse. Peace dollars generally do not tone well. Thanks for looking. Please feel free to leave comments.
SOURCES:
www.vamworld.com
A Guide Book of Peace Dollars by Roger W. Burdette 2nd Edition-2012-Whitman Publishing

Thanks for letting us know she needs a shave.

did not know about that, thanks.

Great blog. VAM's are appealing, I just don't have the patience.

thanks for sharing very interesting variety

The Peace Dollar has always fascinated me not only for its beauty, but the fact that there's one word on it that is not evident on any other U.S. coin: Peace. It was a nice gesture for the times.

Wow! You can really see the "whisker"... Cool variety! For me you have to be able to see the "Vam" with your eye. What a wonderful example!

Interesting variety. Studying varieties of any series, really adds to the enjoyment of the hobby.

A question re VAM varieties--how old is the latest edition of the VAM guide book?

I show it at 1998. That's the Comprehensive Catalog and Encyclopedia of Morgan and Peace Dollars Revised Edition by Leroy C. Van Allen (Author),‎ A. George Mallis (Author) Mine is 4th edition from 1991. I mostly use www.vamworld now. It is very up to date..Much easier to understand and use too. Hope this helps..

Love Peace dollars! I mentioned the 1964 Peace $1 in my book. Rumors but never anything substantial. It's a pity none was saved, for the Smithsonian or for history's sake.

Nice coin. I like the ones you can see with your eye. It's a beauty I like the name I wonder how they came up with that one. Another great find. Great history on these coins. I believe peace dollars are underrated and should not be. As far as the rumor of 1964 I believe that's all it was from the articles I read but who knows what these people do. They have cover-ups all the time. Glad you brought it up. Thanks learned something new today and that I appreciate . You know that. Thanks for your work. Mike