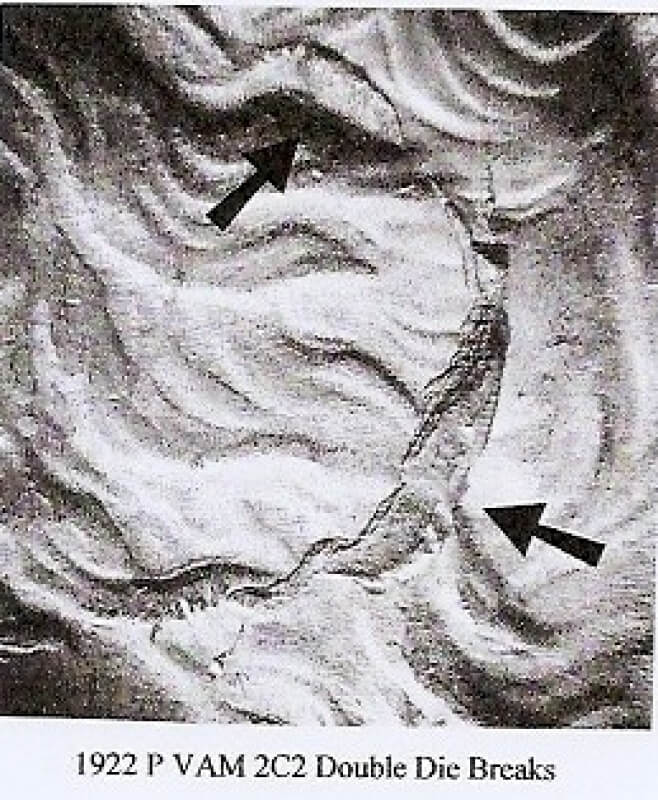 On January 17, 2019 I wrote a blog entitled “1922 Peace Dollar Vam 2C. This blog is an addition to it. In the first blog I mentioned an additional VAM that is called a 1922 VAM 2C2. This particular blog is about that coin which I have purchased after posting the first blog. As you can see in the photos, the original die break has increased in size very much. This means the coin has a much larger chip on it. That’s probably not the correct word for it but that is what I am using.

The VAM 2C2 is what is called an (EDS) or Early Die State. This coin, VAM 2C2 is a (LDS) or Later Die State. Is difference between the two is simply brought about by time. As time goes by more and more coins are stamped from the already cracked die. Eventually the dies crack opens up even wider. This appears on the coin as an increased and raised lump of metal. There is no VAM 3C3. The die has disintegrated.

Both of the VAM designated coins are members of “The Top 50”. This is simply a group of 50 Different Peace Dollar VAMs that are visible with the naked eye. It is an attainable goal for us VAM people. A VAM itself is a list of the variations in the dies used to make the coins. The two men, Leroy C. Van Allen and A. George Mallis, were first published on their huge research of these die variations. VAM is an acronym of their names. Please read this and the older blog to get a better understanding of this offshoot, some call a sickness, collecting VAMs.

Please also check out the photos to compare with the older ones. Any mistakes here are mine. P.S. You may notice that there are two different coins here. My coin dealer taught me “If it’s worth having one coin, it’s worth having two.” Feel free to comment. Thanks for looking. I hope you enjoyed and learned something.

Comprehensive Catalog and Encyclopedia of Morgan and Peace Dollars by

That is really neat to see, and now I learned what VAM stands for and what can happen to dies over time. Thanks :-)

Excellent coin. I don't collect VAMs but I appreciate the ones you can see with the naked eye.

You have the passion for VAM's. Variety collecting can be exciting.

Beautiful coin. So many varieties. Is there a series that doesn't have varieties?

Kepi is correct. Technically every coin is a VAM. We crazy VAM nuts tend to concentrate on large silver dollars like Morgan and Peace dollars. Some of the VAM numbers are really hard to see. File marks and polish lines. That is why I like the Top 50. Thanks to both of you for looking.

Not that I am aware of. It's basically a study of die pairs.

Wow, I was just rereading Mr. Burdette's Peace Dollar volume and he showed this exact VAM, along with a bunch of others for each year and mintmark of the series. I found myself looking at every Peace Dollar I had with the hope of finding something interesting, so far, due to wear or due to lack of a good loupe, no luck. But I will persevere, thanks Cuz, I enjoyed this write-up about my favorite coin.

Yeah the Morgans and Peace dollars have some VAMS like no other this is a lovely coin with great cartwheel luster. Thanks for the blog!

Yes you are right. I have also noticed a few in my Conder tokens. The planchects are made out of bronze and copper there not much more that a quarter but three times the thickness. Back then they broke many. But the game today as we are in the The Peace Dollar and some Morgan's that's why they stopped with the 1921 High Relief they started with them and ended but the breaks continued. Thanks for the pictures and explaining these. I didn't know there were so many. If not for research and pictures well done. The pictures help alot.Mike

VAMS exist nowhere else like they do with silver dollars. Imagine the stress the dies had when they struck millions of these in their heyday. You don't find VAMS in denominations like dimes. I like the "extra hair" significance. P.S. - I would have loved to have a cancelled old Peace Dollar die!