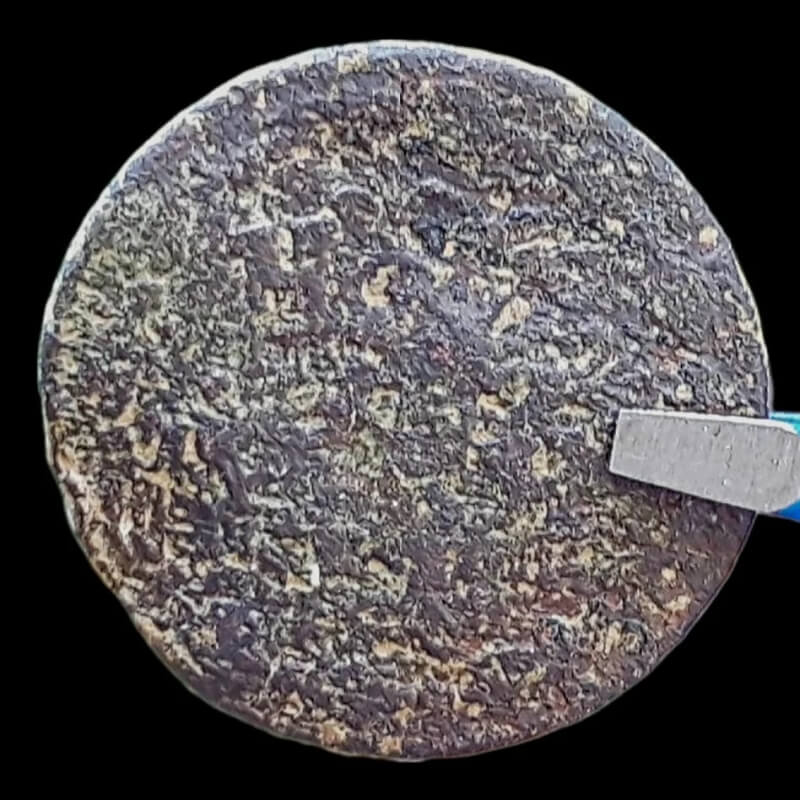 When the state of degradation of a coin makes its study and classification impossible, to such an extent that what we have in our hands is little more than a rusty plate, it is time for forensic numismatics. As in forensic medicine, the remains always provide, to a greater or lesser extent, information that can be very valuable for their identification. Last Sunday, at one of the many stalls that professional numismatists have historically assigned every Sunday of the year in Madrid's Plaza Mayor, I bought a piece that had seen much better times, and I only acquired it because of the challenge that was his classification. I have to say that from what was intuited on the obverse, I knew that it had to be 4 or 8 maravedís of Carlos III or Carlos IV, however I was much more inclined to it being Carlos III. With reference to the reverse, the information was null, due to the enormous quantity of clayey concretions that it accumulated. Therefore, regarding this piece, I had to confirm that it belonged to Carlos III and also find out, if possible, the mint, the year of minting and the face value. Below I attach the images of the state in which I bought it and how it turned out after a thorough cleaning with specific fiberglass punches for this purpose, and the application of microcrystalline wax to stabilize the piece and enhance the reliefs. Conclusions: These are 8 maravedís (this data was provided by the weight and diameter), from Carlos III, from the Segovia mint and minted in 1776. Finally, I am attaching a file photo of another identical coin, but in a magnificent state of preservation.

Fascinating work! I love a good challenge like this!

Thank you for your comment. A greeting from Spain.

Great work! Science does rule! Thanks for a really interesting blog! ; )

Thank you very much for your comment and for the time you have spent reading my blog.

Being the way it could be, all pieces of coinage narrate a great deal of stories. Regardless of their appearance and status, all must be treated with the passion and intense dedication you have done so far. It is wonderful when we find or gain new treasures, because they mark your way in the numismatics World. Keep up the great work. Good luck.

Thank you very much for your comment. I agree with you, for me any coin, be it as it is, is a historical document and almost always provides information. That is why every coin deserves all my respect, because it is part of history.

Some science!! Great job. I really enjoyed this blog. Science rules. Thanks.

Thank you very much for your comment. A greeting from Spain.

Great read. This is only my opinion but I think the last digit is a two not a six! Take another look . I see the 1 and 7 can't make out the next digit but the last one looks like a two. They were raising dates of Buffalo nickels it was big at the time but a little dangerous. I think what your doing is great. Keep it up there is a diamond in the ruff.!

Dear Mike, as always I greatly appreciate your comment. With reference to the date of minting, I confirm that it corresponds to the year 1776. Due to the poor condition of the piece, its analysis is not easy, but seen through the electronic microscope it leaves no room for doubt.

That is odd. At normal view, it DOES look like a 2. If you expand the photo though, it looks more like a 6, but compared to the “pristine” coin, the tail seems a bit high. Did they make these in 1772?

Marvelous job! You are quite the forensic numismatist. Amazing how someone with the right skills & knowledge can take something most would consider worthless junk, and make it something of interest and noteworthy. Thanks so much for sharing this.

Hello again and thank you very much for your interest. Indeed, the wear makes it quite difficult to read the piece, however seen through the electron microscope, it is perfectly clear that it is a 6. In any case, I congratulate you for your question, because, in indeed in 1772 pieces of this same format were also minted.

Thank you very much for your comment. A greeting from Spain.

Wonderful detective work and a great read. Thank You for sharing.