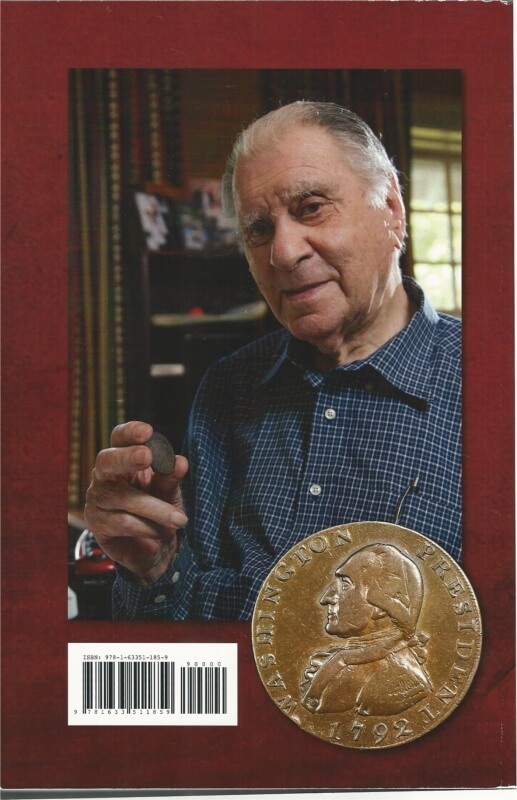 25 Feb 2016
The book is "Researched & Written by Leonard Augsburger, Roger  W. Burdette & Joel Orosz" and James L. Halperin edited it. Additional editing and research are credited to Maureen and Stuart Levine.  It was published by Heritage as an "Ivy Press" work.
Newman was born in 1911. While he had a lifelong "interest" in coins, he came to serious numismatics only as an adult, after MIT and law school. It is true that since childhood, he  had been a patron of Burdette Johnson, a St. Louis coin dealer. But his purchases were grounded on his saving his 5-cent a week allowance, and allowing for street car fare as overhead at that.
His entry  into the higher strata of numismatics was the liquidation of the collection of Edward Howland Robinson Green - "Colonel Green". A larger-than-life Texan, "The Colonel" was the son of Hetty Green, the "Witch of Wall Street."  She gave him the Texas Midland Railroad to manage.  When she died, her entire estate passed to him.
Newman's original interest was only in the banknotes of Missouri; and consummating that deal took several months from late 1939 to early 1940. When it finally closed, Burdette Johnson was impressed enough to agree to a partnership with Newman to buy more, and sell the ones they did not want to other dealers such as Max Mehl and Wayte Raymond.
That is what opened the door to Newman's seeking the truth in numismatics.  Except for Raymond - a consummate researcher and not so successful as a dealer - most dealers (then as now) sold stories and gave away coins.  If you "buy" the story, the dealer "gives" you the coin.  Just for instance, it was said that no 1804 Dollars were available because they were used to pay the naval expeditionary force against Tripoli and none of the coins came back to the USA.  The Colonel Green estate had hundreds of exceedingly rare and important coins, but little was actually known about any of them.
But I am only halfway through the book.
Truthseeker: the Life of Eric P. Newman is only $24. With shipping, I think it was $25.87 to me. I could not find it on the Heritage website, oddly enough, but when I called in, the customer service representative was very helpful.
(More on this later.)

Another great read! Thanks for the review!

Thanks for the additional updates and insights.

John J. Ford's fortunes sank aboard the S.S. Central America and the Brother Jonathan. In 1857, the Central America was carrying gold bars from San Francisco to New York when it went down in a hurricane off the coast of North Carolina. When the gold bars were recovered and the auction catalog published, it was obvious that they looked nothing like "western assay bars." The Brother Jonathan sank off the coast of northern California (Crescent City) in 1865. Ford had claimed that a series of bars that he sold came from prostitutes aboard the ship. When the ship was raised, no gold bars were among the 1200 gold coins found by then salvage team. Another of Eric P. Newman's projects was the pursuit of the Large Cents stolen from the American Numismatic Society by Dr. William Sheldon. In that, again, working over years, and facing opposition from some of the leading names in numismatics, he succeeded. But the search for truth is more than the denunciation of falsehood. Eric P. Newman joined the American Numismatic Society in 1949. At that time, and continuing to the opening of the 21st century, the ANS had been taken into another "A": Ancients. Its leading members and benefactors donated praiseworthy collections of Greek and Roman coins. Its fellows and officers were often respected academics or notable amateurs who researched and published on Greek and Roman coins. Although he was not at all interested in those, Newman joined the ANS, rather than the ANA, because he was seeking an outlet for his own scholarly writing on American numismatics. Again, he achieved his goal. At the urging of its president, Harry Bass, the ANS launched its annual Coinage of the Americas Conferences in 1958. (to be continued)

(I now have only 100 pages to go.... ) The middle third of the book is mostly about Newman's pursuit of the fraud and forger John J. Pittman. Pittman, too, was a complicated person, at once a guiding light as well as a crook. Not in this book, but from my own experience, John J, Ford was one of the founding members of the Numismatic Bibliomania Society: he actively supported research. He also actively pursued items that "no one" else wanted, such as Indian Peace Medals. But he was a sociopath. (My judgment without having met the man is based on my education in criminology - BS and MA.) I never met him in person. He called me once when I worked at Coin World. I benefitted from his criticism. The facts remain. John J. Ford perpetrated a monstrous hoax on numismatics, effectively creating an "alternate history" of the pioneer West. Eric P. Newman fought for years. He was stonewalled by the very people who should have stood with him. I can appreciate that. When I worked at Coin World we were not allowed to criticize John J. Ford,. I believe that it was not that he charmed editor-in-chief Beth Deisher, but that Coin World was afraid of being sued. Except in Michigan, and maybe a few other places, the truth is not a defense in a libel suit. If a man cheats on his wife and you can prove it, publishing the fact harms his reputation, and he can sue you. Get your head around that. It is a fact. Ford threatened everyone who could expose him, including the ANA. Newman wrote an article for The Numismatist exposing Ford's fake "Western Assay Bars." The ANA refused to print it. Ok... But, in addition, the ANA claimed that the manuscript was now their property, this effectively preventing anyone else from publishing it. They did that to avoid being sued by John J. Ford. Eric P. Newman ultimately succeeded, though, as you will see if you read the book, not at all in the venues he intended in those courts of law and public opinion.

That is FORD, not Pittman. My fingers were working without my brain and there is no way to edit the post...

Thanks for the book review and feedback. It sounds like an interesting read.

I want to pick this up. He is one of the greatest collector of them all. .

I enjoy the parts about his mother! Thanks

Thanks for the info. Very interesting so many people contributed to this book. It sound's like a must buy. I'll look into it. Don't know at my age how much I can change my collection habit's! But you know it would be difficult to get through for me mike