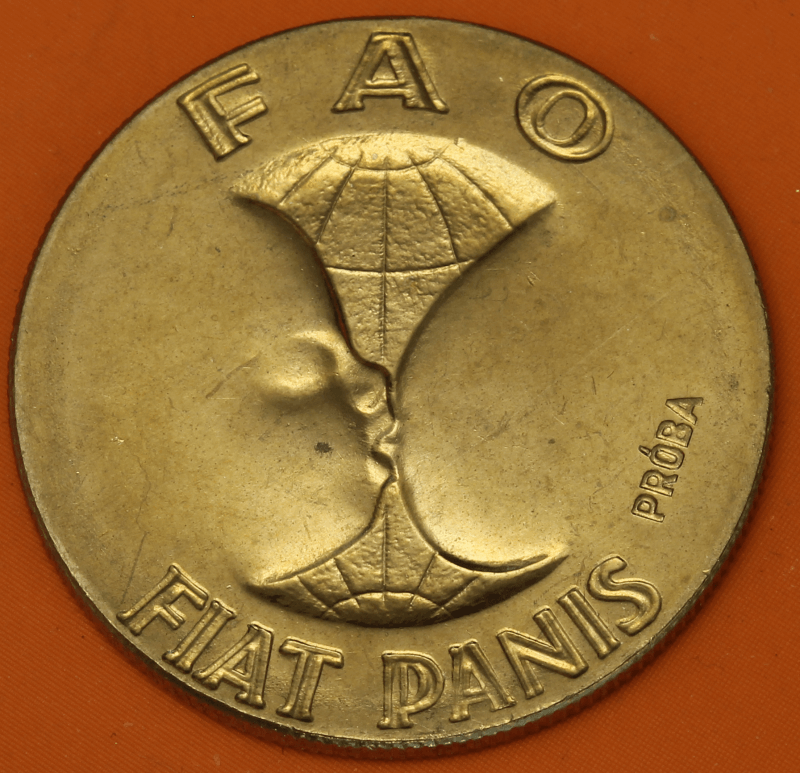 The Polish entry into the 1971 Food for All Program is one of the unsual coins that we have come across for several reasons.    First of all, the subject matter would get the attention of most Americans as it's obverse is an iconographic image of a nuring infant.    Americans wouldn't put this on a coin, but the Poles, especially when still behind the Iron Curtain, would and did.   And it is a nice design, well balanced and with occusive aspects to it.  It doesn't have a traditional rim, but it is struck on an upset coin blank.  So it has a spoon like curve in the coin.   The coin came raw and had a nice bronze tint, but it went to ANACS for conservation and grading and the result wa a lovely metalic color of the coin.
It came in two varieties that are listed in Krause:
Pr185 1971
10 Zotych. Copper-Nickel. Eagle  with wings open. Baby nursing in front of world globe, FAO above.There is about 51K coins minted

the other is plain nickel and was minted for the elite of the Polish governmen and this coin is hard to find.  Krause has it minted at about 500 coins, but I've heard that these numbers are very rough and not to be taken seriously.

Pr186 1971
I'm sort of looking for one of these at a reasonable cost.  Being nickel it should be magnetic.

That is an interesting coin. Good grade too. Thanks for sharing!

Unique and interesting indeed. I saw the image instantly, maybe it's the artist in me that sees the negative of objects quickly. Waiting for Bama to comment on what that means.

Thanks for the blog! Great designs! I like that eagle. ; )

One other interesting thing I see in Krause that nearly every Eagle on every commerative coin is different :) That is kind of cool.

Yeah the eagle is kind of cool. This is one of two Polish coins that came in the set and the other Eagle has a more cartoonish breast. It was not as sharp as this one. As per the question you posed privated about the Obverse, Krause doesn't identify either side as being obverse, but it lists the eagle first and puts the eagle image in the obverse postition in the graphics... So there is that :)

Great blog. I did get through it. Lots of good things. I did learn today. That's the purpose of a good blog. The coins are beautiful I also have some coins with that great reverse of the eagle. Thanks. Mike

I learned a lot writing this blog and classifying this coin. Its a real adventure with a new coin.

At first glance of your photos, great job, I couldn't figure out that nursing baby design. Looked like some kind of error to me. Now I see it. Must be a personal failing. Numista has some nice photos of the coins as well that helped me. I really like the Polish coat of arms. Great looking coins. Thanks. Fantastic blog.

It wasn't obvious to me the subject either. I had to look at it a few time, and you sort of refuse to believe it until you double check. It is a really interesting and unique design.