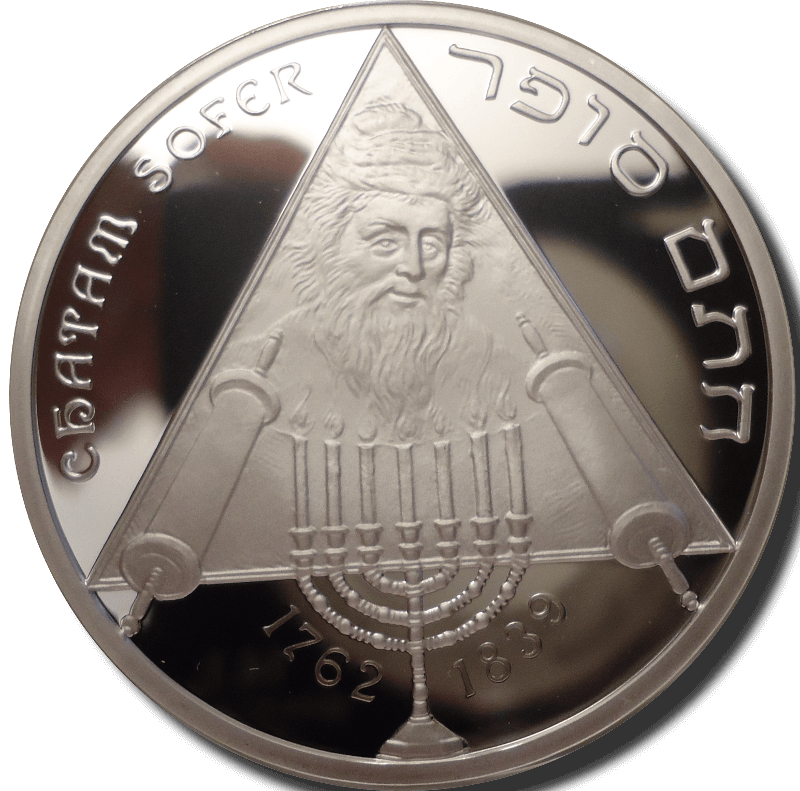 In 2012 I had a friend from the Netherlands who I met on a coin forum.  He would give me a head up about interesting commems coming out of Europe.  Pne of the most interesting ones, for me, was the issue of the Chatan Sofer, celebrating the 250th anniversary of his birth.  The coins were announced and I scampered to the Bank of Slovakia's website and put in orders for the bullion issues, one proof and on BU.  An original announcement on coinupdate can be seen ==> here .  They were the start of a substantial commens collection that I had at the time.  Not to beat a dead horse, but these were also stolen from my house, which bring me to an interesting crossroads.

Many of the coins that I had lost, I went out of my way to reacquire.   Some issues are no beyond my grasp.  These two coins, which I wrote about back in 2012 when I acquired them,  These coins have virtually disappeared from the market and when you do find them, the prices are outrageous,  even though they seem to not turn over that much.

I've learned since then that the Slovakians have come to fully embrace their history with the Jewish people and the Chatan Softer specifically.  His gravesite in  Bratislava, Slovakia, which they threatened to destroy with a road, has since then turned into a world class monument worthy of a side trip when visiting Europe.  I initially learned about it from a lecture on youtube by Henry Abramson, which is worth listening to on its own right  https://www.youtube.com/watch?v=mzYOE5NvMCw  .

The bulk of the cemetary is now underground.  and has been submited as a World Heritage site  https://www.worldheritagesite.org/tentative/id/1731
Quote:It is however important to stress that this is NOT a museum. Jewish community of Bratislava is owner of the place, and according to the 20 years old memorandum, the community has guaranteed to the municipality that they allow entering even to non-Jewish visitors. As already explained in the previous review, the place was covered by concrete blocks in 40s to hide it from the outside world. During the communism, the stop for trams coming from the tunnel was built directly above the monument. Despite this situation, the tram stop become the pilgrim place for visitors from all over the world...

I am always in search for this coin and it was a major reason for going to NYINC recently, but it wasn't available.   So I keep looking

This is not the only commerative that I search for.  Other rare commemorates include the Perth Mint issues I had and coins from Israel.  They seem to just disappear.   I had a wonderful Akko coin ... that is not replaceable.  A few of the Dangerous Animals from the Perth Mint.

Sorry to hear of your stolen coin. Maybe someday one will come up for purchase. Good luck and thank you for the blog. ; )

I'm sorry you were hit. Never give up. You will find that bay some day. I wish you luck. Great history I am learning from you. Thanks.

The commerative market is interesting because of the targeted audience and small mintages. The dozens of private mints now, and I don't know if I consider those silver and gold rounds as coins, but their products are interesting. That is in addition to the public ments, such as the Dutch Royal Mint etc. See what the Pressburg mint is producing now. https://www.pressburgmint.com/ and the Perth Mint https://www.perthmint.com/ Heaton's Mint, Birmingham, United Kingdom https://web.archive.org/web/20070828115457/http://jquarter.members.beeb.net/walk13.htm - they seem to have an interesting story involving their shutdown