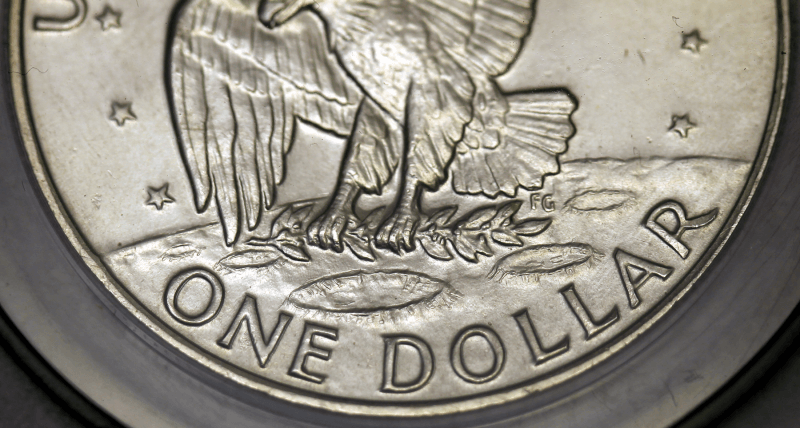 As silver was removed from circulating coinage in the US, the US designed that were generally created for silver never adapted well to the Copper-Nickel coinage and the metal itself, despite being almost 90% copper,  is quite hard, and easily scratched.  It is a very utilitarian material  used in salt water piping, boat hulls, etc.  When I think back on this, it seems that they gave no consideration to the beauty of the minted coins when choosing the material at all.  Clearly this is the kind of decision made by an entrenched government bureaucracy.  The got coins, but face it, for 40+ years we have been stuck with coins that suck.  The material wears out of the dyes, doesn't impress deeply or sharply, and the quality of the coins has been constantly bad, especially when coupled with high speed presses.

In the wake of this, the US Mint decided to bring back the US Dollar coin, largely for the use of Las Vegas slot machines.  When Eisenhower died in 1969, this gave imputes for silver commemorative and clad circulating dollars to be minted.  Republicans where particularly happy to get the coin out as coinage was dominated with Democrats, with Roosevelt, and Kennedy.  The Kennedy half was a real claw in the side, and Eisenhower's former VP, Richard Nixon, was all too pleased to see his former running mate have equal time.  Additionally, the success of the US moon landings begged for a big splashy propaganda outlet, and the Ike Dollars covered all these grounds.  The Silver Ikes were well designed and lovely.  The Clad design just never really worked and coins were sincerely ugly.  They often came out looking like big Nickel plugs (even though they were actually more copper).  They were poorly minted, hard, cold, and clanked in the till when used in the register.  Outside of the casinos, they were disliked except as novelty pieces.  As a 7 year old child at these times, I liked them in my collections draw.  But these things were not going to be carried around in peoples pockets.

By 1973, the mint stopped producing them for circulation.   Already astute collectors were pouring over rolls of Ikes looking for the very rare decent example.   But this was not an option for 1973, as there were not rolls to be had.  The 1973 Ikes were limited to the special edition mint sets that were sold that included both Denver and Philadelphia.  This results in a real shortage of collectable 1973 Ikes.    It also meant that collectors tore through hundreds of thousands of mint sets to find decent Ikes.  As we are reach 50 years after these events, appreciation of these coins  is coming into focus and the 1973 Ike is proving to be the hardest of the Ike series to find in high MS state.  All the clad Ikes are conditional rarities in gem states.    The coins were so badly produced that it is actually difficult to grade them.  Coins that might be 62 grade in the Morgan series would be hotly sort after gem Ikes for the 1973 Clad series.

The result is that Ike prices are quickly being propelled to record values.  High grade Ikes are escalating in prices and showing a very strong market, and this will likely continue for the rest of my life, and likely yours as well.

Nice! I agree with Mike that the Ikeâ€™s are very underrated and are a great coin. Thanks for sharing!

The portrait is underated as a work of art. This particular 1973 was a truly rare example and expressed the artistry of the engraving very nicely for a business class clad. It was conserved by ANACS.

I like the Ikes too! A nice big heavy coin! Enjoyed your blog! ; )

I like this series. Ike is very big in the Low Desert, by where I live. He has a huge hospital and medical center in the Palm desert area. I carry around a few with me for o have no idea why. Love the coin design hate the metal. They make good service tips. Thanks. P.S. Funny story. There is a lady that comes into my coin dealer to buy Ikes at a small premium. She gives them as tips to her favorite server. This server then comes into the dealer to sell them to him. The circle of life! Neither is aware of the actions of the other.

Another enjoyable reading. I see the same things as you, the market value is beginning to rise more quickly having spiked on a few Eisenhower dates in just the past six months. The rest of the series will follow.

The price on MS67s makes your jaw drop. What is interesting though, is that the rarer ms67+ 73-Ps and Ds are still seperating slowly from the pack. The demand for silver IKEs is so much higher than the clads that it is supporting the silver ike proices despite the huge difference in rarity. Go find MS68 1973-P Ikes.... they just don't exist.

Every young Numismatist should have a cornerstone collection of Ikes.

Thanks . I enjoyed this very much. The Ike is very Underrated. I believe the design is great especially the reverses. As a matter of fact I have not seen a blog on them. I have the full book and slabs of silver I learned something today. Thanks to your work.

They actually covered IKES in this current issue of the Numismatisist http://onlinedigitalpublishing.com/publication/frame.php?i=734497&p=&pn=&ver=html5 A GOLDEN ANNIVERSARY, PART 5 After casinos switched to electronic gambling machines, Eisenhower dollars no longer served a purpose in circulation. The conclusion of the bicen- tennial coin program at the end of 1976 meant a return to normal for the Eisenhower dollar. Unfortunately, normal was not an ideal situation, as it was still abundantly clear that the coins were seldom used outside of casinos. In 1977 I was a college student working part-time in a pizza parlor, and I did receive a dozen or so â€śIkeâ€ť dollars each month while manning the cash register. This, however, was solely because the casinos of Reno and Lake Tahoe were just a few hoursâ€™ drive from San Fran- cisco. Casino patrons who failed .... etc