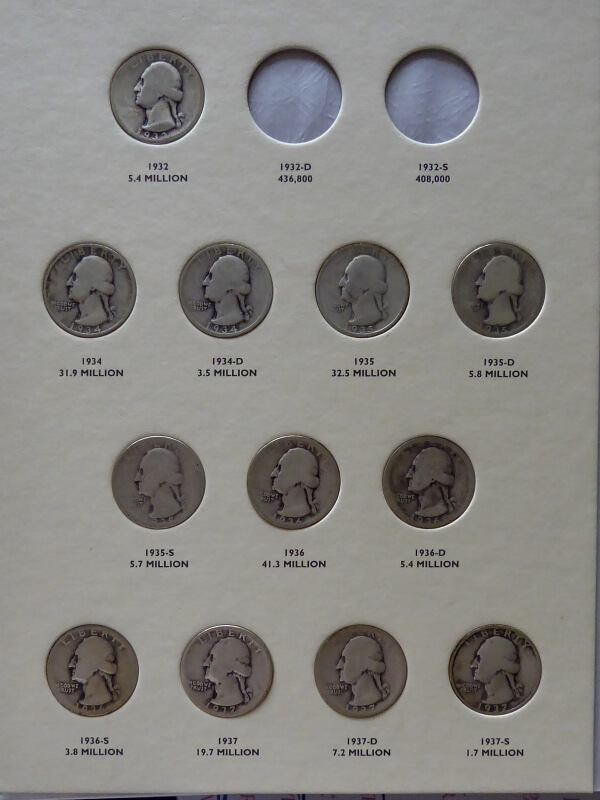 30 Jun 2018
I'm in my sixties and I'm starting to collect coins, seeded by a modest inherited collection. I vaguely remember having some coin folders when I was a young boy, but I did not develop and continue the hobby, when spare change was more relevant to coin collecting than today's pocket change. The attached image is the first section in my Littleton Washington Quarter Folder, 1932-1947. It reveals the only two missing quarters in this Folder: 1932-D & 1932-S. I can go to the bank and get rolls of quarters, but I'm not going to find these two quarters. If I pay significant money for these two coins, I'm not going to take them out of their certified cases and put them in the folder.  Now I have to make a decision - What is my intention for collecting coins? I'll keep this answer brief. I'm going to collect coins for coin folders, but pass up spending more than $5 to $10 for that rarer than average coin missing from a folder. I will call this PHASE ONE of my coin collecting activities. Once the penny, nickel, dime, quarter, and perhaps half dollar and dollar coin folders are as complete as possible without investing significant amounts of money for a single coin, then PHASE ONE will be complete. That will mean some slots will never be filled, but so be it.
PHASE TWO of my coin collecting will be the thoughtful and educated process of acquiring more valuable coinage. I won't be able to open a folder and look at them all at once, but Phase 2 will be as much an investment vehicle as it will be a collection of coins. Both phases will be FUN!

you should keep an eye out for the rare ones and try to catch a deal here and there and eventually you will have built a substantial collection with many rarities. just study the markets and wait for the best opportunities to buy.

I would just write under the date in slab. A lot easier.

The only drawback with collecting coins in folders was (and apparently still is) that it did not encourage the collector to obtain higher grades and more expensive specimens. No one wants to put their fingers all over a coin in mint state and push it into a cardboard slot where the other side is subject to toning. Folders are great when you can obtain coins from circulation and hit is why i enjoy putting together a set of quarters from pocket change. But cracking something out of a slab and putting it into a folder will never happen. Still, enjoy what you love.

You are absolutely right, and as a beginning collector these are some of the questions I am grappling with. While I am ramping up to "square zero" I am limiting myself to pocket change except for a few small inexpensive exceptions. I even decided to go with the inexpensive folders that only display one side of the coin. Again, before investing 3x the cost of a folder for a notebook that exposes both sides of the coin, I want to be sure this hobby will stick.

Welcome to the hobby. Take your time and learn and enjoy the history associated with your collection. Have fun!

That collection is very nice. It reminds me of how I started. I like nice circulated coins. Hopefully, phase one goes as planned. Remember to buy what you like, nobody should decide for you what you want.

Good luck on Phase one. Starting to collect is one of the most fun experiences you can have.

Those are some cool old quarters! Good luck on this first phase! Looks like your'e off to a good start. Don't give up too easily on not finding those rarer dates...you never know whats out there waiting to be found. Have fun!

Thanks for the comments, Mike. I read my first hard copy of the Numismatist periodical which is a great source on the history behind coins and other numismatic collectibles. It was thoroughly enjoyable.

Hi welcome I'm also in my sixties. Been twenty-four years now. I do it because I like it I have learned so much history more than college. I like medals and tokens which my kids will get. I still keep up with the books it's nice to see them up to date. I read what I can on the history it's absolutely great. The coin or token or medal tells it all. I hope you enjoy it here if we can help we will. Take care and it can be fun. Mike