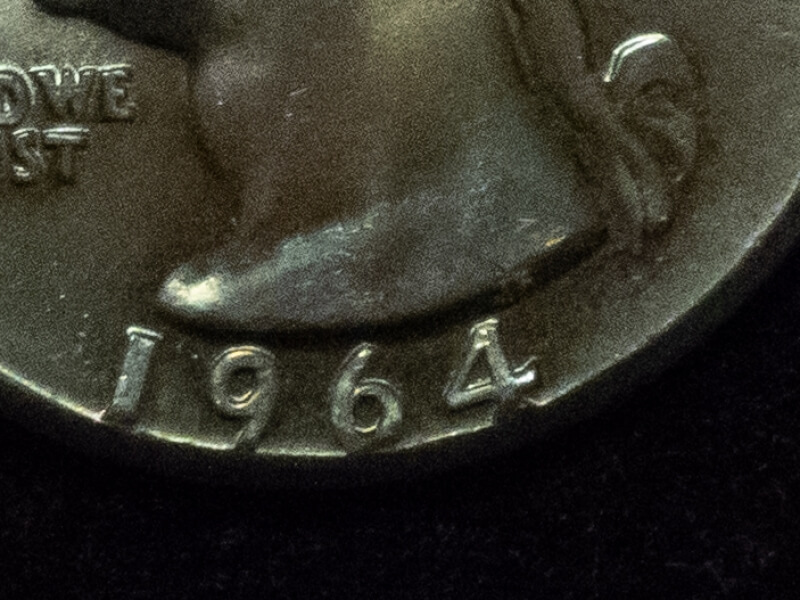 28 Jun 2018
My father-in-law was a coin collector. He was also a Cuban refugee from the early sixties who fled Cuba with his wife and two children. They all became U.S. Citizens. Chalon was a coin collector, but we never discussed this. It was a modest collection, not neatly stored in coin folders, but he had several plastic tubes containing an almost complete set of Washington quarters from 1932 thru 1964. You can probably guess the 1932-D and 1932-S are missing. He did not have lots of money to spend on collecting but he paid close attention to his pocket change and I am sure his collecting activity gave him much personal satisfaction. The simple act of finding a coin in you pocket change you are searching for. Ahhh, what a simple pleasure! I will continue his quarter collection.
Examine the attached images of a 1964 Washington quarter. Can someone clarify for me if this coin was struck with a broken die? Look at the bottom stroke of the "4" on the date. Perhaps this IS a break, but a very insignificant one. That is what I would like to know. Thanks.

Have a coin dealer take a look. It does seem kind of different. Good luck on your collection!

One of the most appealing aspects of coin collecting to me is that you really dont need a lot of money to create a collection in many cases. Thank you for sharing this story. I agree with Mike Burns, at first glance my thought was a doubled die.

What a great story.. Inspiring! What does the Cherry Pickers Guide say?? Pretty odd looking.. Thanks.

I agree with the others that a dealer should look at this. I think you are going to find that it is post mint damage. The edge doesn't look right to me.

Good story. As for the quarter, maybe an error specialist can help.

Some nice luster on that, I would get a loupe of some kind if you're running into these problems frequently. It helps I identify a lot of problems, and/or doubling.

As Mike said it is hard to tell from pictures. Ask a dealer or pay $8 and have CONECA check and identify.

Thanks for the suggestion.

I don't know. You can't tell everything from pictures. Sometimes it will look like a doubled die depending on the camera angle.. like the date and some letters. Bring it to a dealer they will help you. Great story about your family. Brave.

I don't know. You can't tell everything from pictures. Sometimes it will look like a doubled die depending on the camera angle.. like the date and some letters. Bring it to a dealer they will help you. Great story about your family. Brave.