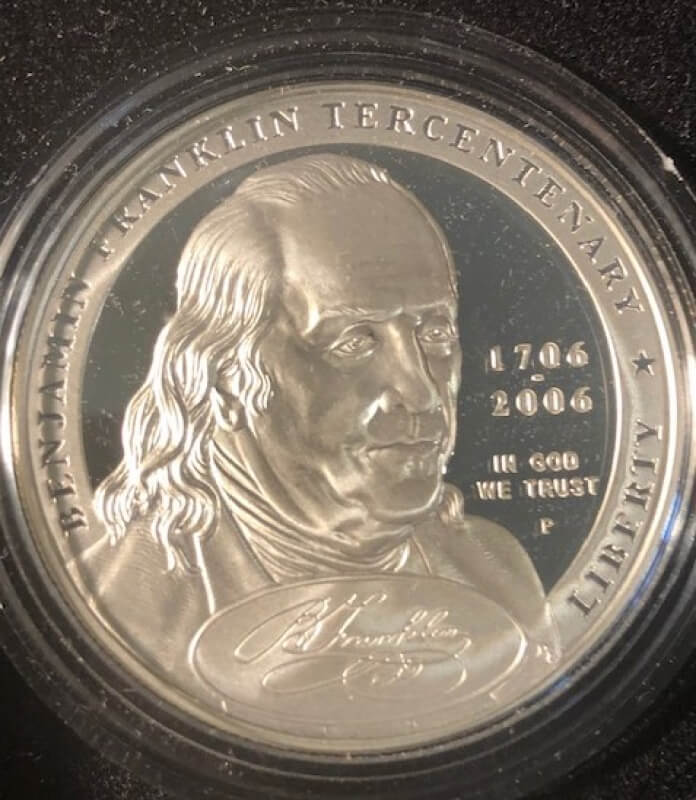 This is part 2 of the American Legacy sets that I've collected. It's the 2nd in the series and was minted in 2006.  On the left side of the set is the Benjamin Franklin commemorative. This year, the set was offered again, containing the nine coins from the annul proof set, as well as the proof versions of the 2006 Benjamin Franklin Silver Dollar (Scientist) and the 2006 Old San Francisco Mint Silver Dollar. A full sell out was achieved for the product limit of 50,000 units. The mintage of the Benjamin Franklin is 142,000 proof coins. They were minted in Philadelphia, and the designer of the obverse was Don Everhart and the designer of the reverse was Donna Weaver. It is made of .900 silver, .100 copper and weighs 26.73 grams. It's diameter is 38.1 mm and has a reeded edge.

On the right hand side is the Old San Francisco Mint Centennial Silver Dollar. The mintage of this coin is 160,870 proofs and it was minted in San Francisco. The designer of the obverse was Sherl F. Winter and the designers of the reverse are Joseph Menna after George T. Morgan. It's made of .900 silver, .100 copper, weighs 26.73 grams and it's diameter is 38.1 mm with a reeded edge. This mint was nicknamed "The Granite Lady" survived the 1906 Bay Area earthquake and fire.

The set also includes the proof set for 2006 and the state quarters for a total of 11 coins. The state are Nevada, Nebraska, Colorado, North and South Dakota. These sets are affordable, historic, and would be a nice asset for any collection. I still haven't ordered the 2008 set, but will be doing so in the very near future! My social security check don't get here until next week, and my "allowance" is only $200.

As always, enjoy the pictures, and say hi to the latest addition to our family, "Bonnie Blue"! Stay safe, HEALTHY, and coronavirus free.

Beautiful coins and set! I have always kinda liked the US mint commemorative. Thanks for the blog!

Nice set. I don't remember seeing that one before.

I do like those sets. Regrettably I failed to order one at the time, which I've done annually from the mint since the mid-eighties. That and the now way over priced 2012 silver proof set. As for the Franklin's, I did buy all four individually.

Bonnie Blue is a cutie and your Legacy Set is outstanding. Thanks for sharing both Charlie.

Nice set. Ben Franklin ! We have a Ben Franklin here in PA that attends the PAN show. I bet hehas this set also. Nice blog. Thanks

Good stuff! I can only dream of a $200 allowance! Haha! Thanks so much for sharing, and those are some beautiful coins! Love the puppy too! Catch ya later!

That's 2/3 of my disability check John...lol She gets the other 3rd and my Social Security, so she comes out on top !

I was lucky I got the puppy on top!! Great pick up!! I would grade him a 70!! Good blog on these sets. That's allot of coins. Nice set . How many did they make. The legacy sets. I don't remember. I remember I didn't buy them. But The best part of the hobby is we get a second chance. Thanks for your hard work and tell Bonnie Blue I said hello!