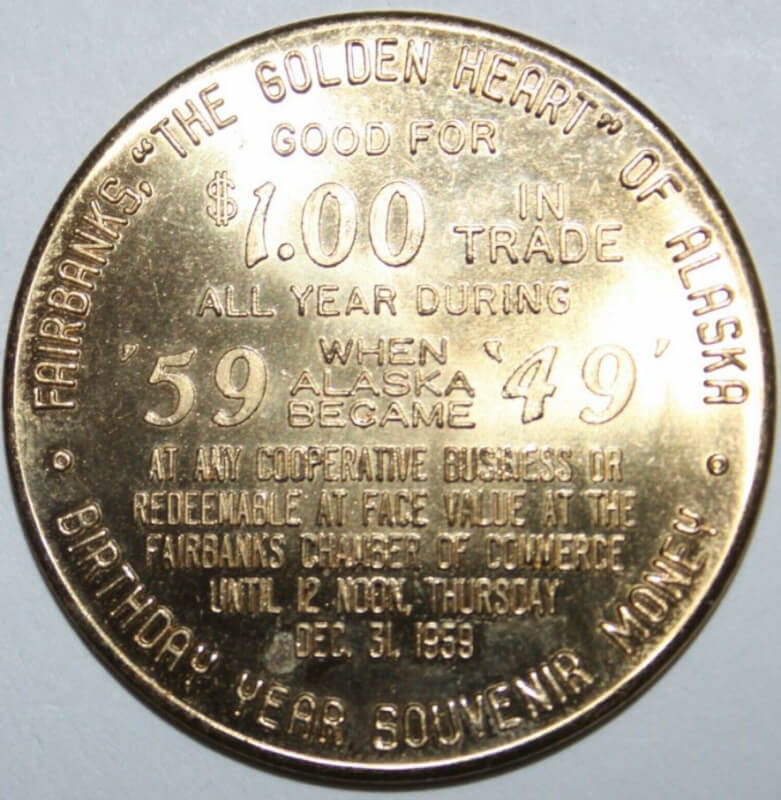 I started collecting  coins when I was 10 years old in 1959.  Anything round was a coin to me. After a while, I learned not every things was a coin.  There was a different between coins, tokens and medals.

I don't remember where I saw an advertisement selling Alaska "gold dollars," but I thought they were neat. For a couple of bucks, I could have a "gold coin." Featuring the Alaska state seal, I thought it was a nice looking "coin."  Even though this is a common item from the year Alaska became a state, I  I still have it in my collection.

Part of history and also Numismatics.

As you say, they are common but I think they were well done. I wonder how many were actually redeemed.

It's really cool! Great to have in your collection ; )

That is a nice beauty. I would of had to have it. Still might. Thanks.

That's awesome. I sometimes need to remind myself that many people grew up without Alaska or Hawaii as a state, and some very lucky people remember times when many more states were just territories.

Is it a medal or a token, doesn't matter. It's very interesting and great to have in a collection!

Awesome medal, or so called dollar? I have a great interest in medals now. So called dollars is what i look at. Also Heraldic Art Medals by Robert McNamara.

Very Nice SUN!!! You are lucky to still have things from your earliest collecting days. It must have been quite a thrill for 10 y/o SUN to get that golden token in the mail.

Sounds like a fun "coin" to add to your collection! Thanks for sharing! Cheers, NM

I love these type of "Non-Coins", my wife is going to have a fit and brother she's gonna want one, you see, she was stationed in Alaska in the early 80s and loves anything Alaska. So Sun my friend, it's off to e-bay I go, hi ho! lol! I simply love the advertisement tokens and "Fake Coins" that were put out during the Fifties through the Seventies. I know some were done after that but the majority seem to be in that time frame. Thanks for the great blog and the wonderful photo, even if it's gonna cost me. Later! Sun you are correct found em on e-bay and most are very reasonable. Thanks!

After this one, I acquired many different Alaska items. It won't cost you that much, they are common.