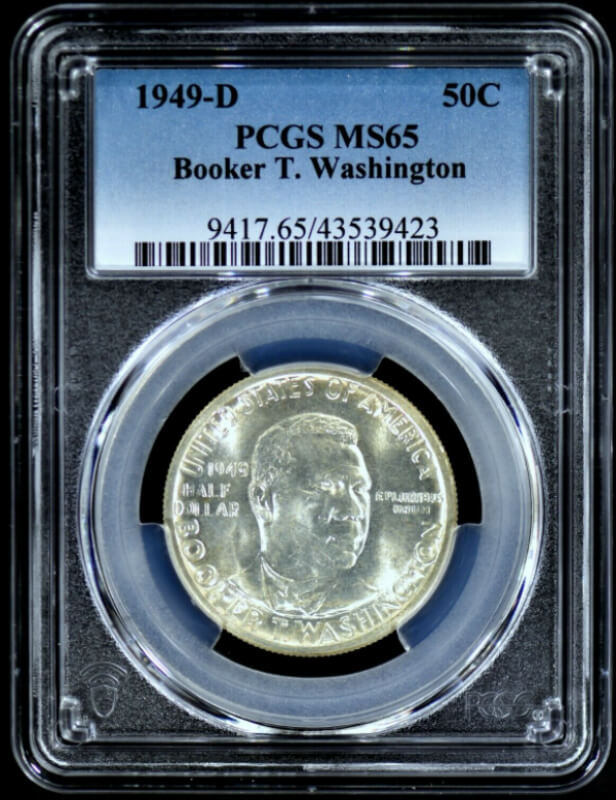 I am going to write some short blogs on my life as a coin collector.  You might like them or think they are boring, but they are my stories.

I always considered myself as a bread  and butter collector.  The bulk of my collection is pennies, nickels, and dimes,

All my years of collecting, I wanted to put a birth year collection together in uncirculated condition of 1949 dated coins. The collection would consist of 14 coins, since no quarters were minted at San Francisco.  1949  is the "key" year  for Roosevelt Dimes and Franklin Halves.  So about five years ago I completed the birth year set.

About two years ago. I moved the goal posts for the 1949 dated coins. I decided to add the Booker T. Washington commemorative coins to the set. There  were about 6000 coins struck at  each of  the tree mints. It took a while to find the coins, but I finally pushed the set across the goal line with 1949-D Booker T. Washington half.

Interesting way to collect. I never thought of that.

Birth year set, is a great way to collect all coins produced across the mints, of all denominations, to include mint sets and commemoratives. Congrats on getting across the goal line in that regard. Thanks for sharing.

I've got a few in raw form. Thanks for motivating me to look for a couple at this weekend's PAN show!

That sounds like an excellent pursuit. I always set my goals for collecting in a similar way, it makes completing the project all the sweeter. Thanks for sharing your journey.

Great idea. I think many of us have at least started birth sets. I like the commemorative addition. Good idea. keep them coming. Great to hear from you. Also good for the YN's to hear what we have done. Thanks.

Thank you. I think that's a great idea what your going to do. I know one will be better than the last! I will be looking forward to them. Thanks!