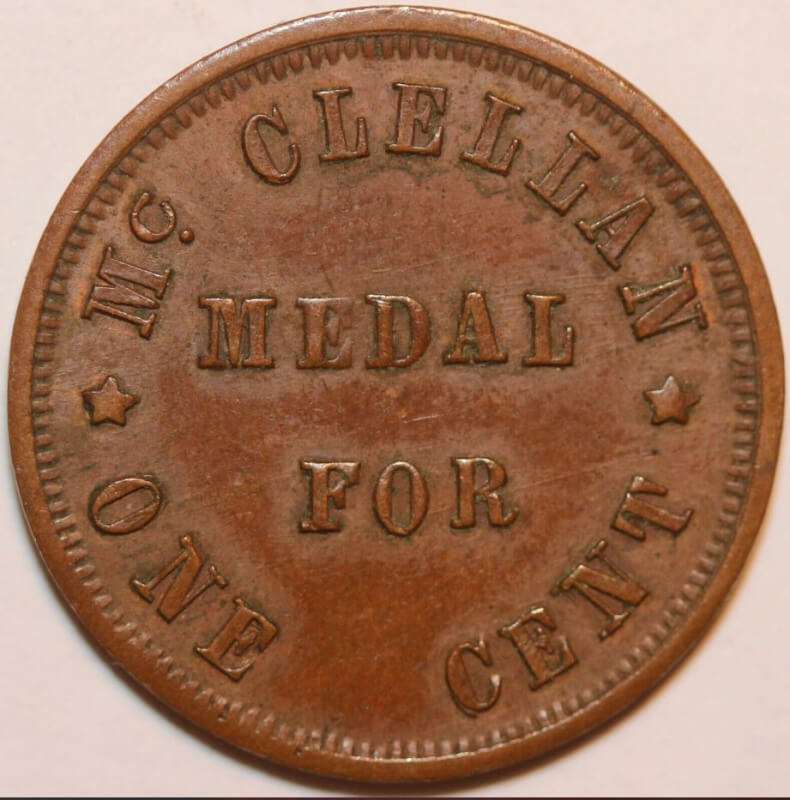 SOME WHAT OF A MILESTONE

I consider myself a novice when it comes to collecting Civil War Tokens (CWT).  I obtained my first CWT in the  early 1960's when my sister received one in change as a carhop at the local A & W drive-in.  I just added my 50th CWT to my collection.  I have added about 40 tokens in the last ten years.  This particular token is known as 140/391 which features General George B. McClellan known as "Little Mac."  The reverse  has  McClellan/Medal/For/ One Cent.

This token was made by Emil Sigel, probably the leading producer of  CWT in the New York City area.

There are over 500 different dies combinations with each other and metals, makings over 10,000 different CWT.  There is no set way to collect CWT.  I I collect by different subject matter.that I find attractive.

There are seven known dies that feature McClellan, thus this token fits nicely in my "subject type set."

I saw a really nice exhibitof cwt at the Shenandoah Valley Coin Show last December. They were what I think are called store card tokens from local merchants in the valley and I was surprised to see how many different ones were issued.

What a nice token! A great addition to your collection. I'll look forward to seeing others that you have....

I like it. Not many CWT's in my collection but I still enjoy them. I think my wife has more of them than I do.

That is beautiful. I also own a few. I have cooled down recently but I still want to get more. Beautiful picture. Nice history, Thanks

I myself love these tokens as well as the many store cards of which I have several. What you hadn't touch on was why these came to be. For that, I'll leave it to researching and add that in the book In God We Trust there is a well written chapter on the matter. So In suppose I need to add a few more in the very near future. Thanks for the topic!

Very attractive CWT Sun. I don't own a single one myself, for some reason they always seemed daunting to me. But, you may have inspired me to get one with Cannons because I love Tanks and the closest thing in the Civil War is a big honking Cannon.

Nice Token. I don't believe I have anything like your token's. Really a interesting area of collecting. Will look for them at next shows.

Thats a beautiful cival war token. I own a few. They helped our troops allot. Thanks for the history. Sigel is one of the best.