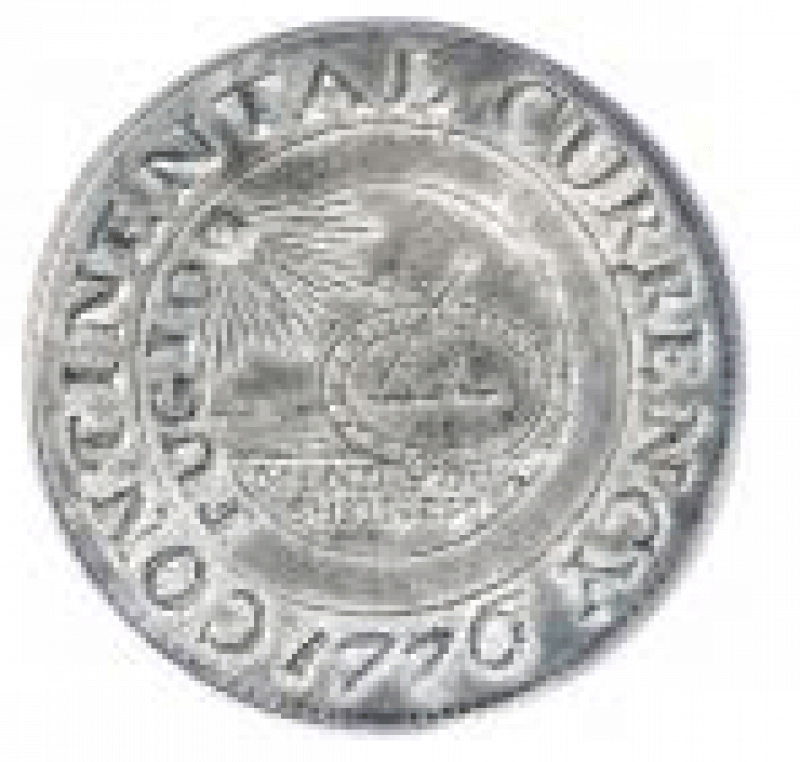 Numismatics and history are very closely connected.  From the earliest coinage to modern commemoratives, coins tell the story of triumph, conquest and tragedy throughout history.  They tell the story of kings and of revolutions, exploration and innovation. This series looks at the history of the Modern World through the lense of 20 coins.

By the time of the American Revolution, coin technology had greatly advanced.  In the mid-17th century, mints began moving away from the traditional hammered coinage to milled coinage.  This process involved a machine with a screw. The screw was tightened, putting pressure on the die and planchet and imprinting the design on the coin.  This process was experimentally used in the 16th century England, but was ultimately unsuccessful. By 1700, however, most coins were being minted with this new machine, which made a much clearer design.

In contrast to 16th century coins with rough details, the Continental Dollars issued in 1776 were crisp and modern.  On its reverse is a circular chain with the names of the 13 colonies. This design is reminiscent of the "Join or Die" flag, with a snake made with the names of the 13 American colonies.  Both that flag and this coin were made by Benjamin Franklin. In the inside of the chain is an inscription "We are One", which fits nicely with the closed links formed by the names of the colonies.  The obverse shows a sun and the statement "Mind your business". In addition to being used for money, this coin has an obvious political message to it.

1776 was a monumental year in American history.  After revolution broke out in April 1775 at Lexington and Concord, 1776 brought the Declaration of Independence.  But throughout the year, the new Continental Army faced setbacks at Long Island and White Plain, resulting in the loss of New York City.  The army finally won victories at the end of the year at Trenton and Princeton (commemorated in the "Washington crossing the Delaware" on the New Jersey state quarter).  The provincial government, the Continental Congress was desperately short on cash. Therefore it is not surprising that the early American Dollar was made not of silver or gold (or ever copper), but of pewter.  Pewter (also used in gunpowder) is mostly composed of tin, a cheap metal, which would have been used out of necessity. The problem of money was not solved until the French and Spanish intervened in 1777-8.

However, the Continental Dollar became so devalued and worthless, that it became part of the English idiom "Not worth a Continental."  Under the Articles of Confederation, both the Congress and the States had the power to mint their own money, as though they were separate nations.  In the long run, this did not work out, with 13 sets of coinage circulating, and the Constitution (1787) gave the power to mint coinage to the Congress alone.  This lead to the creation of the Philadelphia Mint in 1792, and the issuing of the early America Â― cent and 1 cent.

Although the Treaty of Paris at the end of the American Revolution ended the war between France/Spain and Britain, this peace would not last long.  Within 20 years, the French monarchy would be gone, and Britain and France would be back at war.

Next: Napoleon and France

Every coin, token and medal have a history it's the research we do by books, that give us the knowledge we need.

History and coins go hand in hand! Thanks for an interesting and informative blog! ; )

Thank You for your blog, one of the best things about coins is their ability to take us back in time to explore world history.

Interesting blog. Thanks for all the history..