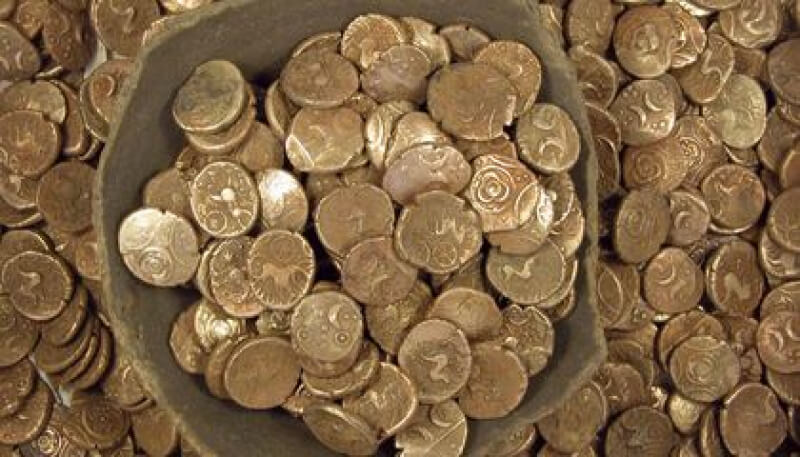 What are coin hoards?     Coin hoards are large amounts of coins that are usually buried or hidden for safe keeping. Usually, coin hoards are found on accident and have many types of coins. Many coin hoards have very old coins in almost perfect condition. Ancient coin hoards     An ancient coin hoard is a hoard of coins from ancient times. These coins are often in good condition and are impossible to find anywhere else. The discovery of an ancient coin hoard reveals a lot  about life during ancient times and the coins that were made then. US coin hoards     Some coin hoards have american coins from the 1800s and the early 1900s. These hoards have coins like  double eagles and Morgan dollars in perfect condition that are never seen anywhere else. Shipwrecks     Some hoards were not buried or hidden intentionally. Some hoards were found in shipwrecks that sunk many years ago. Most coins found in shipwrecks were coins that are hundreds of years old but some coins found in shipwrecks are from recent ships that sunk. Coins from shipwrecks can be coins from many different countries. Shipwreck hoards have gold and silver coins that are hundreds of years old. Sometimes the coins are rusty and in bad condition but sometimes they are preserved and are in almost perfect condition. Famous coin hoards1. The Wells Fargo hoard     The Wells Fargo hoard was a hoard discovered the the early 1990s that had thousands of 1908 no motto Saint-Gaudens double eagles in amazing condition. Ten coins were even graded MS-69. The coins in this hoard were some of the best double eagles ever found.2.  1998 Midwest mega hoard     In 1998 a hoard of 488,000 Buffalo Nickels, 308,000 Liberty Head Nickels, and 950,000 Indian Head Cents that the president of Littleton Coin Company had been collecting. This coin hoard was the largest coin US coin hoard ever made.3.  The Frome hoard     The Frome hoard was found in 2010 near the town of Frome in England. The hoard was buried in a ceramic pot and contained many ancient roman coins dated from AD 253-305. The pot was so large that some believe it may have been an offering to the gods.4. The Montana hoard     George Bouvier hid 8,000 silver dollars in the walls of his house and many more coins in coffee pots under the floor boards of his shop. He told one of his friends who told Bouvier's family about the hoard. After they searched they found over 17,000 coins.          Not all coin hoards are found and no one knows how many are still hidden. Some coin hoards may never even be found.

Nice story on hoards. Would love to have a hoard of something myself. Thanks

Very nice blog and accompany photo. It is well written. There is always a chance to find one.. Good luck.

Someday I would liken to find a Hoard like the couple walking there dog in a California park with there dog and found six or seven coffee fans full of gold. I would take one of cents!! Thanks very interesting on hoards. Thanks for the research and i Information. I enjoyed it.

Bowers book on hoards is worth reading.

David Bowers has written several excellent books about hoards in the United States or surrounding waters. Some of the hoards are relatively modest but some are spectacular like the ones you mentioned. Always an interesting topic and always a hope when I take my metal detector out on a day trip.

Thank you for giving me that book recommendation. I will make sure to read it.