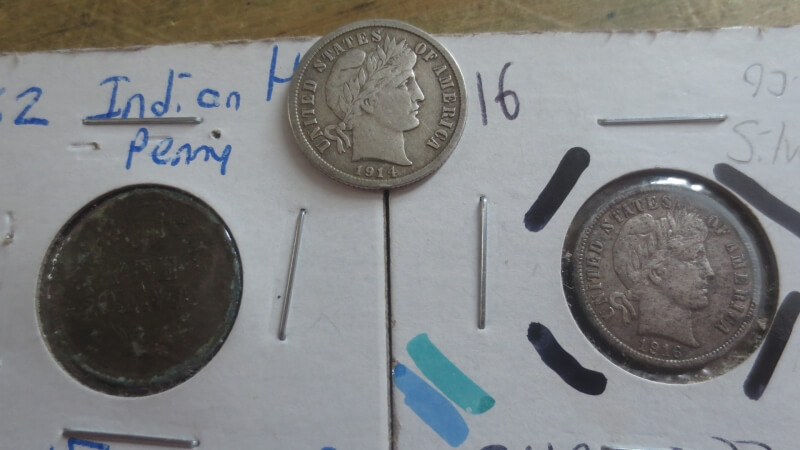 It was 1862, and along with 28,074,999 other pennies, a brand new Indian Head Penny was minted. The coin was shiny and was proud of it's whitening color. The coin was put in a bag and was brought to a nearby bank, where it sat for about six months. Finally someone came and took the penny along with 49 others and went home. The Coin was happy to be moving to a new environment.

After passing through many hands, in 1864, in the midst of the Civil War, the coin was passed to a soldier, whose regiment was stationed in New Jersey. When there, the soldier dropped the penny, and with plenty of feet stepping on it, and with plenty of rain, the Indian Head Cent was lost in the ground. "I'll never be found again," the penny moaned.
50 Years later, in 1914, at the same mint, a brand new, shiny silver dime was minted. It too was brought to a bank, and this was taken by a farmer, who lived at the same place where the Indian Head Cent was underground. The farmer was a wealthy farmer, so a dime didn't matter much to him. When at home, the farmer was walking in his front yard, when the dime fell out of his pocket. The farmer, being wealthy, didn't care about a single dime; so this coin too, went underground, only 15 feet away from the Indian Head Cent.
By this time it was 1916, one of the last bags of Barber Dimes came out and went to the same bank, and went through many hands, which finally went to the same farmer, who dropped it only 6 feet away from the other dime.
The lonely coins sat there; almost a full century passed, when I got a metal detector for Christmas. I was very inexperienced, and a little over-zealous about getting coins and coins only. On December 26, 2013, my detector beeped as 'Coins', I dug, when out flopped an XF-AU 1916 Barber Dime!!! Nine months passed until a 1914 F-VF Barber Dime appeared, and a crusty 1862 Indian Head Cent.
Now my 1862 IHP and my 1916 Barber Dimes are in cardboard 2 X 2's, and my 1914 Barber Dime is in a folder!!!

Great story. Interesting. Thank you for your work.

Nice story. We should all be that lucky!

Great story and nice finds! Thanks!!