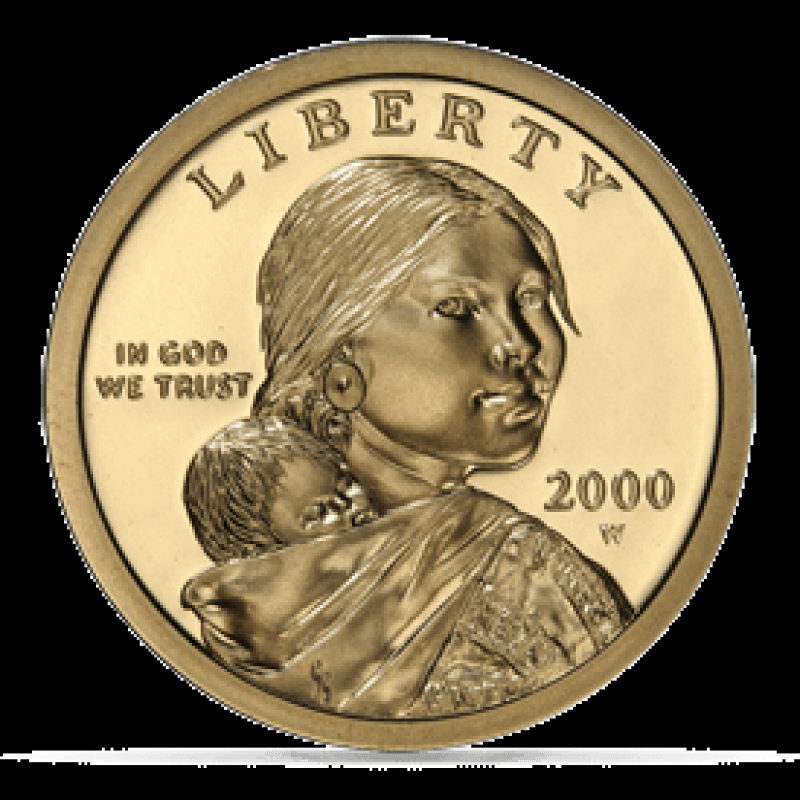 ††††††††††††††† Many people refer to the Presidential, Innovation, and Sacagawea dollars as ‚ÄúGolden Dollars‚ÄĚ, due to their manganese brass cladding giving them their ‚Äúgolden‚ÄĚ appearance. But the truth is that these coins contain absolutely no gold. Or at least, that is for most of them.

††††††††††††††† But there is one small exception to the lack of gold in these coins‚Äď the 2000 W Sacagawea Dollar Coins. Collectors better not get their hopes up of owning one though, as there are only 12 of these in existence, all of which are kept inside the Fort Knox Bullion Depository in Kentucky.

††††††††††††††† In June 1999, 39 Proof Sacagawea Dollars were struck on planchets for ¬Ĺ ounce Gold quarter Eagles. While carrying a W mint mark, these 39 coins were struck at the Philadelphia mint. †The United States Mint planned to mint duplicate coinage to sell to collectors, but those plans were quickly scrapped after Congress questioned if the Mint could legally strike the Sacagawea Dollars in gold.

††††††††††††††† The Mint kept the satisfactory examples and ended up melting the rest down. There is a general disagreement between experts on if 18 coins were saved, or if only 12 were saved, but most experts lean more towards the dozen examples remaining.

††††††††††††††† After returning to Earth on July 22, 1999, the coins were then transferred to a vault within the United States Mint Headquarters. One of the coins was featured at a private congressional dinner in August 1999, and another was shown at the Philadelphia Mint during the first-strike ceremonies for the 2000-P Sacagawea Dollar coins. In September 2001, the dozen coins were sent to the Gold Bullion Depository within Fort Knox.

These coins had quite a journey. Thanks that was really interesting

Quite a journey! Thanks for the story.

I seem to remember these, and I remember seeing them on display at the ANA's Words Fair of Money show.

Cool, and I learned quite a bit!

Same as TheNumisMaster, I learned quite a bit, thanks!

An interesting story, I had heard about it but not the specific details. Thanks for your research and blog entry.

Too bad they don't circulate

They struck the Kennedy half in gold once, so why not the Sacagawea dollars? If it's profitable for the mint, never count them out.

I remember all the coins in space. Yep, I'm that old. I really enjoyed your blog. Very well done. We don't see many blogs on this coin. I kind of like it and wish we used them as circulating coins. Just like the government to go though all this hoopla with the coins and then lock them up for no one to view, Thanks. Happy Easter and Passover to all.

Thanks for your blog! Really interesting information indeed! Didn't know about these! ; )

A top tier blog. Well written through vigorous research. I had stubble across the existence of these at some point in the past but only read about it briefly before moving on. Enjoyed reading what I missed!

Very interesting, thanks for sharing. Didn't know about this happening.

I never here of that. This is how we learn!!

Very fascinating... I have never heard of these coins! I learned quite a bit, so thank you! Cheers, NM