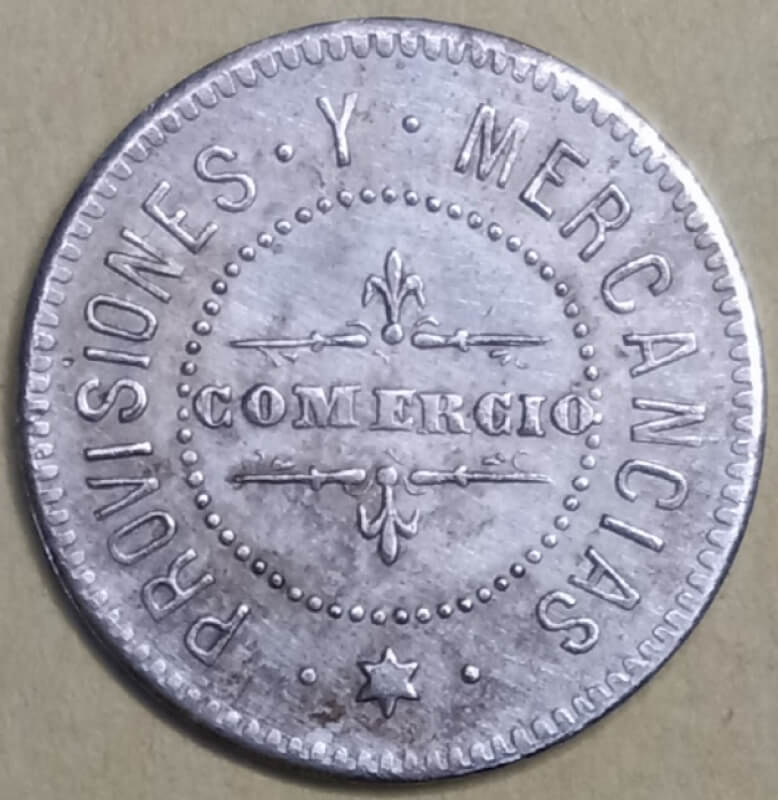 When the United States of America administration took over the island of Puerto Rico, around September 1898, it faced an unstable economy and precarious infrastructure, both inland and at the larger cities.  Within the first 22 to 32 years of American presence in the once held Spanish stronghold, this type of token or menchant's coin circulated in various shapes, sizes and even non-round forms. Its dimensions fluctuated from 19mm to 25mm at most, and usually made of tin or rarely in aluminum, not many were struck in copper. Even though the one shown here is from 1910, this specific type was circulating from as early as 1900, mostly struck in the back of a warehouse at a larger city in the island with subsidiaries for each merchant or farm dealer.

Inland, specifically within the mountain towns, agriculture and the selling of necessary goods was practically the two aspects moving people in and out of farm sustained communities. Those who stayed, faced dependency on major "Hacienda" owners as laborers and non-payed workhands. Being on a non-pay status meant to depend on running food certified bills or food notes and, within more organized farms, tokens with various denominations pegged to larger commercial providers or wholesale dealers (who at most instances were well-to-do Spaniards who befriended American investors and government officials.)

This is a 1910 token worth 10 cents, pegged to F. GĂ“MEZ a merchandiser tied to the "Hacienda Palma Escrita" in the municipality of Las MarĂ­as, Puerto Rico. The town is located in the Western Central Mountain range. This area is known to produce Valenciana type oranges, coffee and other citric fruits. With this token, a laborers' wife was able to acquire flour, sugar, dry goods and in rare cases meat. Prizes were that low, poverty was extremelly high. This products were also bought at the merchandiser's store facility usually or conveniently located within the entrance of the Hacienda or plantation. It was a round business.

This is historically relevant as a monetary item representation, a token with buying power from the very beginning of the twentieth century. It is a vintage non-financial item  from a territory of the USA as it worked towards a better future.

Not all history is good, but hopefully the future learns from it.

Nice Token! Interesting history to with it! Thanks! ; )

Bibliography please!! Some of us what to read more.

-Nevins, A., (1974...) History of the United States of America, Spanish Ed. -Miller, F. K., (1939) "Historia de Puerto Rico" (History of Puerto Rico). ***Word of mouth: my great grandparents on my father's side. ***Word of mouth: my great grandparents on my mother's side. ***My recollected experiences and academic background: Master of Arts in Education, Major in Art History (2005), Bachelor of Arts in Humanities (Western Civilization, 1991) â–ˇNumismatics Society of Puerto Rico, Associate Member. Narrated history is as good or better than printed versions. Lest not offend my ancestors. Word of mouth is highly respected in my land. I will be turning 55 soon and I cherish my past, my history.

What a coincidence! I spent all day-most of it anyhow- researching and writing about the other U.S. territory following the Spanish-American War.

Dear friends, you can always check the Library of Congress section about the Hispanic American War and how the Philippines, Puerto Rico and even Guam became American real estate. Woodrow Wilson and Eleanor Roosevelt wrote memoirs about Puerto Rico. The National Archives and Records Administration hold an extensive collection on Puerto Rico under the US flag dating 1899 onwards.

Didnâ€™t see a lot for bibliography on either. I wondered if you guys looked this stuff up, or if you just knew all that history!

You are welcome, my friend. Thanks for your visit.