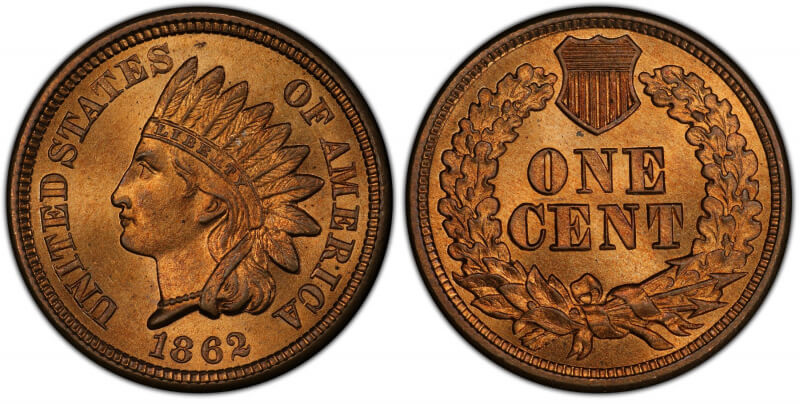 Hello everyone! Today I would like to share with you the history behind the Indian head cents struck during the civil war, as well as the Civil War tokens made at the time to replace cents. Let's begin!

Tension between the north and south had been boiling in response to slavery, and their opposing opinions on the idea. The Confederate army was not intimidated by Abraham Lincoln's inauguration in March of 1861. On April 12 the Confederates began a bombardment that consisted of over 3,300 shells in succession over the span of just 34 hours. This was enough for the Confederate to gain control of the fort and surrounding area. And so began the civil war.

These events occurred only 3 years into the production of the Indian Head cent, and 5 years into the production of the US small cent. Rising copper prices forced the US mint to downsize the cent, and change its composition. The original alloy used from 1857 to 1964 consisted of 88% copper, and 12% nickel. This alloy became known as copper-nickel, but would only be put to use for 7 years before they would again change the composition. This was due to the hardness of the alloy, which would result in difficulty to get a good strike and would also wear down the die at a faster rate. The copper nickel alloy was switched to a bronze one halfway through 1864, creating two different composition based varieties for the year.

As the civil war kicked off, a massive coin shortage developed, causing many different problems. The US mint started reaching record high mintage numbers for Indian head cents to keep up with the demand, but it had little affect on the shortage. Hoarders were at full throttle, and soon coins were scarcely available anywhere. This caused a huge halt at businesses, and something had to be done about it. In response, business from across the country took it into their own hands. They began striking their own coins.

These privately struck coins are known as civil war tokens, and to be more specific the ones used by these businesses are called store cards. Store card civil war tokens usually would have advertisement or something similar. The other type of civil war tokens struck were Patriotic, and they only had details on the coin that you would expect to see on a US coin. For example, a Patriotic token might have the

the American flag on the obverse, and "Army & Navy" on the reverse. The civil war tokens were a huge hit, and began replacing the Indian Head cents that had vanished from circulation. Millions of civil war tokens of over 10,000 different designs were struck, and businesses were able to provide change again.

As I mentioned earlier, there are two different types of civil war tokens. Store cards and Patriotic. Explaining all the different varieties that exist is way to complicated to just summarize, so I will have to skip over the topic. Civil War Tokens are designated a number for identification. For example, my token is a #350-299. We don't have an exact mintage number for all these different types, though there is a rarity scale that is based off of the estimated mintage. The scale is called the "Fuld Rarity scale", and it ranges form 1 to 10. If a token fits the description of #1, it is a R1. And if it is #2, then it is referred to as R2. R1 is designated to tokens with a mintage of 5000+, and would be considered very common. Below is the full chart of the Fuld rarity scale:

Soon, the US mint was competing with the favored civil war tokens for circulation. Of course, the mint prevailed by outlawing the production of coins for circulation in the US. The US mint started making fractional currency in 1862, which included 3, 5, 10, 25, and 50 cent bills. Fractional currency was meant to just me a short-term solution, and did not live on any further than 1876.

Thank you all for reading! Hopefully I will be able to get next week's blog up on schedule. Stay safe, and keep on collecting! Your fellow numismatist, CentSearcher

Well written blog! Thanks for all the information. Civil War coinage is always cool! I'm happy that I have a few of these in my collection! ; )

Great blog CentSearcher! Very interesting and informative, I have a couple of those Indian Heads myself!

I have a few to say the least. I. Am a member of the Civil War Society. . They were used for many reasons.. Suttlers would sell them to the confederate and the Army of the Potamic. And sell to both sides at the same time. David Bowers wrote two books on them even though George Fuld and his brother wrote the original The soldiers sent them home so the family could eat. And they bought shoes with them. I have some rarity 5 and some7. The two numbers one was for the obverse and the other for the reverse. . Good blog!!

Very goo blog. Lots of research. Try putting in your sources. I think a lot of people would like to do some further research on their own. Still, well done..Thanks.

Very nice information ! I like the rating scale. When it comes to medals, medals can be found with a rating scale of R5 or higher for reasonable prices. Coins on the other hand are expensive in rare categories.

Very detailed, and much appreciated! I love the history behind these pieces. Thank you!

Thank you for that history. I'm a beginning collector and did not realize that these tokens existed.

I think if you study your history that you will find that slavery was only one of the issues surrounding why the Civil War was fought and I don't even think it was the primary reason, or the war would have begun when the emacipation proclamation was signed. Even that did not eliminate slavery in all union states, just the states that had seceded from the Union. Excellent blog! I enjoyed reading it....

Hey, I was going to say that.

civil war coins and tokens are always cool and fun to look at. WL