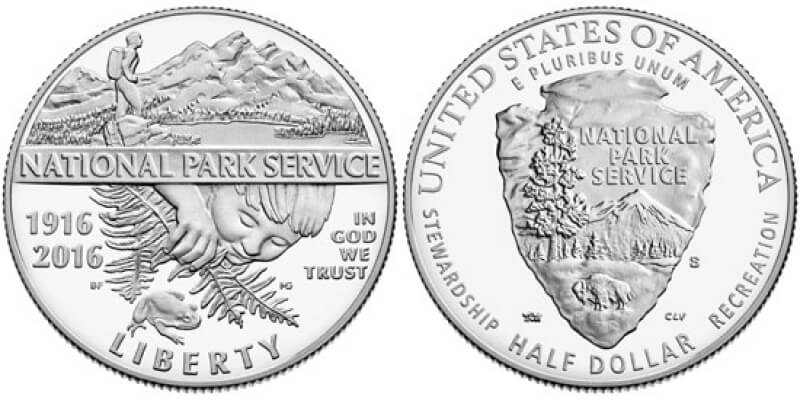 Greetings members of the ANA! I've been pretty busy this weekend, but I was able to set aside enough time to put together my weekly blog (let's see how long I can keep it up).  As I mentioned in last week's blog, most of the articles will be related to a recent pickup. The title will have this week's discussion, and in parentheses. I'll also be making titles in bold for each paragraph, because some of my blogs will be really long ;)

This morning I found an Ebay auction for a coin that had been in my bucket list since the very start: the 2016 National Park Service commemorative half dollar. Some of you may already know from past blogs and forums that I am as much a national park geek as I am a numismatist. While I have been trying to focus on 19th century US coins lately, I couldn't let this one pass for the price. It is a clad proof with a mintage of 54,845. The half dollar became available for purchase on March 24, 2016 with a pre-issue price of $25.95.

On the obverse is "National Park Service" that splits the coin into two scenes. The top shows a hiker on a trek through the mountains and the lower half shows a child finding a frog hiding in some ferns. The National Park Service was established in 1916 to preserve the nation's wilderness, wildlife, and historic sites. The date along with the NPS centennial year 2016 are both displayed on the coin. The reverse features the NPS arrowhead. "The elements of the emblem symbolize the major facets of the national park system. The Sequoia tree and bison represent vegetation and wildlife, the mountains and water represent scenic and recreational values, and the arrowhead represents historical and archeological values."

Why choose modern commemorative half dollars?

Now to broaden the topic, let's talk about collecting modern commemorative half dollars. There are several different options to consider when collecting commemoratives, but the first question to ask is if you want to collect early or modern commemoratives. Modern might be the best option for budget collectors, though early commemoratives aren't too expensive, but I'll save that discussion for another blog. Next, there are half dollars and dollars ($5 gold coins are also an option, but I'll skip over them for obvious reasons, at least for now). For most years, the half dollar is clad and the dollar is silver, though there are a few exceptions, including the first commemorative half (1982 George Washington). Even silver dates are very affordable, with each example rarely costing more than $25. They come in a variety of different mintmarks, though not all are available for each design. Philadelphia and Denver are found on uncirculated strikes, San Francisco on proof strikes, and even the West Point mintmark in 1993 for uncirculated strikes. There are currently 28 designs, with the mintage usually sitting between 50,000 and 300,000.

Once you have decided to start collecting modern commemoratives, there are several methods of storage for you to choose from. One approach is to simply purchase the coin in its original mint packaging. Though it is a good idea to keep the box, coa, and capsule, you can remove the commemorative in favor of a different storage method and be able to pop it back in later. While you can use 2x2 flips, pages, and a binder for your commemorative collection, it isn't very common and I recommend my third suggestion: an album. Unfortunately, there aren't very many albums available for modern commemorative halves, so the best option would be the Dansco. Don't worry, the Dansco 7063 isn't as expensive as some of its brothers and sisters. Keep in mind that the album includes slots for every mintmark, not just one for each commemorative design. One downside to the Dansco though is that because they stopped manufacturing them they only have the slots labeled up to 2011. But there are enough extra blank slots included to put in one for each design following 2011.

I think that I've held you down long enough. I included a quick list of all the modern comm. halves below for those of you who might want to know them. Thank you all for taking the time to read my blog! Stay safe out there, and keep on collecting. Your fellow numismatist, Timothy

What Happened to Ellis Island, Seoul Olympiad,1988, Eisenhower centennial 1990,Korean War ,1991. White House 1992. I stopped there !Why were these left out.? There are more. If there is a gold you can buy the silver. I'm just curious. It's not a complete list. The blog is good no problem good work. The list could use some updating. Keep on writing !!!

I never thought about this before, but the half-dollar commemoratives are very collectible as opposed to the commemorative dollars.

Nice! I did not know about this coin until this article,

Like yourself I love our national parks. I have the silver, looking for the gold for a slightly more reasonable price. I'll find it.

Very informative and we'll written, thanks!

Beautiful coin! I have this one in my collection. Love the National Parks! ; )

Really? That's awesome! Zion National Park is towards the top of my bucket list, I've heard a lot of great reports of it

I bought this one in silver for my wife. She grew up visiting many of the National Parks with her Grandparents. It's one of the nnice modern ones in my opinion. To add on to Mokie you can get blank pages for your Dansco album, if you can find them. Thanks.

I agree. My plan is to get the silver dollar one for my type set sometime in the future

You can also use a Dansco album that just has slots for half dollars with no labeling. That will allow you to set up the collection exactly as you like it. I am using a generic cent album to hold my Canadian Cent collection, it works perfectly.

I should of thought to mention that, good idea. Makes me think of a bunch of other possibilities

The important thing is when you buy a commen. Ten % goes to the memorial they have. Like the Woman In War. WW 11. Those all have them . The Nation Park Service . Law enforcement. I'm not a fan of some of the designs. I'm a big fan of the old ones. But modern coins become old ones. Good blog thanks for your work!!

Yeah, I don't care for some of the newer ones either, but the National Park Service is definitely an exception for me

Thanks! It would be nice to see them all laid out in an album