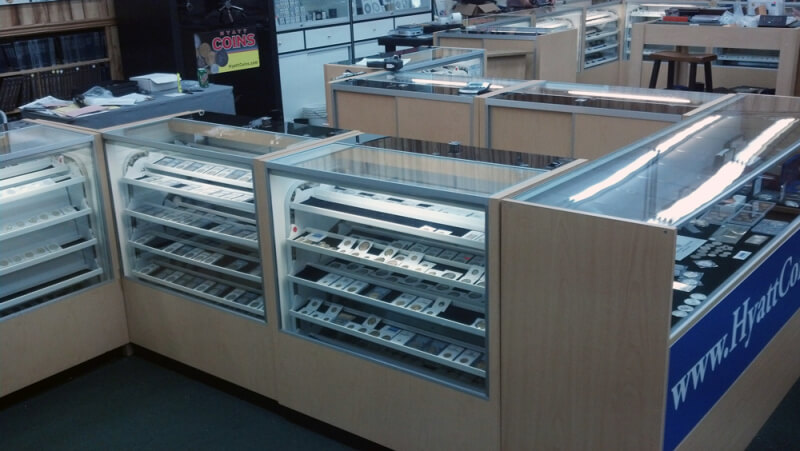 Hi everyone! I was at my local coin shop yesterday and I thought that I should share some of what took place there. So first and foremost, last time I went there I bought an 1863 Indian Head Cent for $12. Several days later, I noticed some form of die cud on the reverse. I posted on the forum and thanks to your help I found out it was a die break line. So yesterday I took the coin back to the coin shop and sold it back to them for $50. With that I bought an 1859 Indian Head cent in very fine condition. Meanwhile my mom was looking around and found a gold coin that was made in the charlotte mint, which I didn't know existed. From a bucket of indian head cents I found an 1865, 1879, a AU 1905, some fillers, and two higher grade 1909s all for $1.80 each. In the showcase, I got 4 BU red 1960s upgrades, and a 2019 W. It had to be in MS 69 grade or possibly 70. What I realized is that they had a lower mintage than the 1909 S VDB, so it wouldn't be bad to have a high grade one in the future. Another discovery I made is the existence of 2009 COPPER proof cents. Other than that I got a few foreigns including an Canadian large cent. I think for a 14 year old I did pretty good, and soon I plan on opening spaces in my binders for proofs. Until then, keep on collecting! Your fellow numismatist, Timothy

I wish my local coin shop had a selection like that! Wow!

Well done my man! Sure sounds like a successful hunt! Happy to hear, keep me posted.

I love hearing about everybody's coin shop experiences, makes me want to go out right now and go through a basket marked everything $1. Thanks for sharing, you had an excellent day.

It sounds like you have a good eye for coins. I am still working on that. I hope to be as good as you at some point in the future.

Someone had a good day. I wonder if that dealer remembered you! That was a sweet deal. You had a great day. Nice work good blog.

That is awsome. I wish I had sense enough to do that, but when a coin hits my house, I can't seem to part with it. I know, I know, I've got tons of coins that could go, duplicates from upgrades in the past, I just can't seem to want to part with a coin if it makes it home. As my grandfather would say, "Good horse sense", keep it up. Looking forward to your next find.

Nice find and profit from reselling the Indian cent. You seem to have a great local coin shop that is a great place to find new coins. I have not been in a coin shop for a while. Looking forward to the next coin show though. It's been a while since a coin show. Nice work and let us know the next coins you find.

I love foreign copper coins, especially when they are that big.

Thank you everyone! Next time I will try and post pictures of some of the individual coins

Way to go Timothy. Nice research job. Got a great deal selling it back. I love it. Charlotte Mint is one of my favorites for gold coins. A bit out of my price range but I still enjoy looking at them. Nice haul. Thanks.

Hey Timothy, looks like you made quite a haul! Good job on parlaying that coin for a major profit too! You are definitely on your way...

Good job, in my experience Indian heads are one of the easiest coins to cherrypick. If you could post pictures next time you share pickups that would be nice. Thanks for sharing! -Chris

wow i wish i could find that cool of a coin and make profit.

Outstanding! Congratulations on the huge profit on that cent. In today's world, the local coin shops seem to get overlooked and as a result deals such as those you've discovered all too often get passed over. Best of luck on your future additions.