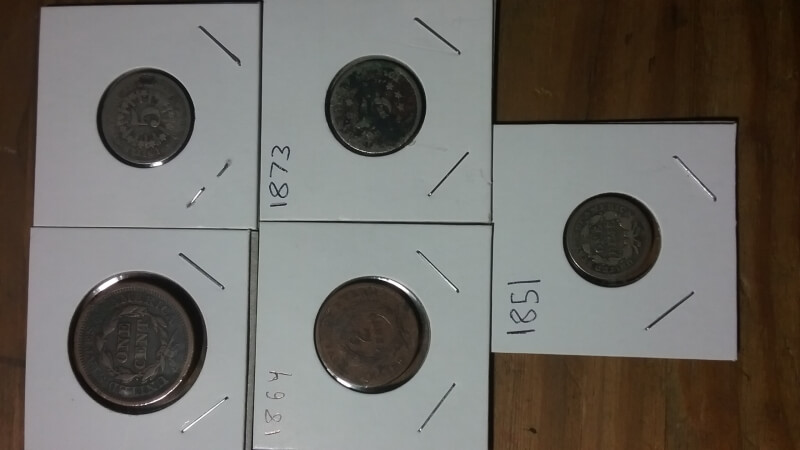 27 Nov 2016
these are some of my finest coins from the 1800s. My oldest US coin (not including colonial and British coins used in the colonies) is the 2 1851 coins, the penny and dime. The dime is worth around $35 and the penny is also about the same price (by my standards of grading and the Red Book's prices). the other coins are a 2 cent piece-1864 ($15) and 2 nickels one 1873 and the other 1868. they are each worth around $30 each.
i got the penny as a birthday present a while back and a few years later i was given the 1873 and 1864 as a 13th birthday present. i bought the 1868 in a lot of old nickels.
these are very interesting coins due to the era that they were minted in, the civil war era. who knows were these coins could have traveled, up and down the east coast (since they came from the Philadelphia mint) to the Confederates or the Union. or did they make there way out west with some of the later pioneers. What items could these coins have purchased? there can be many interesting stories told about the journey of these coins.

It is pretty cool think about what these coins went through over 150 years? Who might have previously owned them? What kind of roll in the commerce of early America did they play?

Nice set thanks for the pictures. Most of the coinage during the civil war were tokens. They were made aboutv1860 to 1864 some later thanks again!

Nice collection. I am glad felt you needed to share.

Good start on a type set. Type sets are very good for conversations, of what the U.S. made.