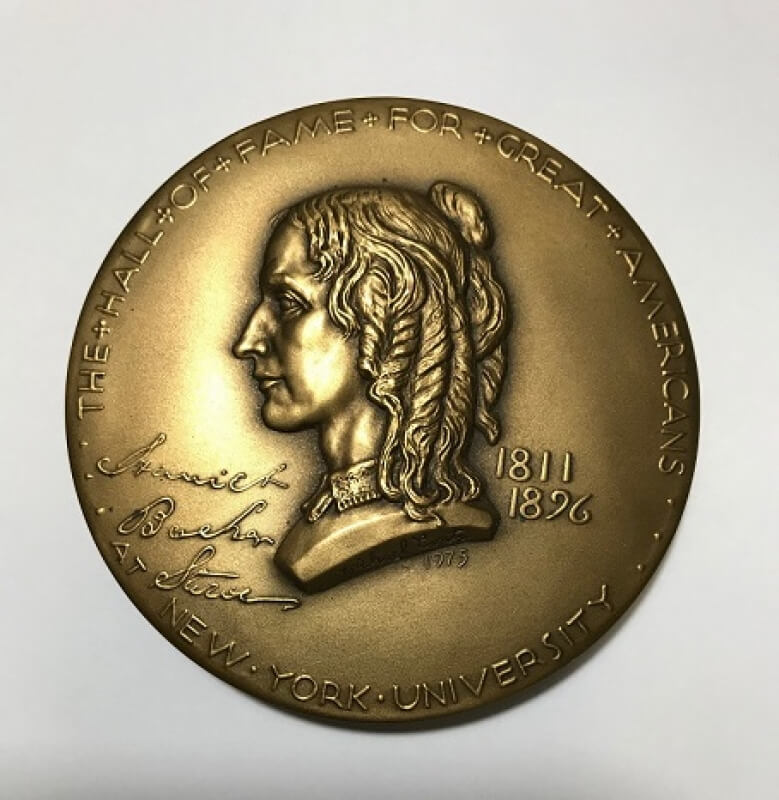 “The little woman who started the Big War”

That was what Abraham Lincoln called Harriet Beecher Stowe, author of “Uncle Tom’s Cabin”, the famous novel which bitterly slavery in 1852. Within five years it sold half a million copies in the United States. It was also in great demand in England, and eventually was translated into many languages.

A medal honoring Harriet Beecher Stowe was issued by the Hall of Fame for Great Americans in New York University as a part of a series of medals commemorating each of the immortals enshrined there.

The medal was minted by the Medallic Art Company from a design by Michael Lantz, noted artist and former President of the National Sculpture Society. The medal bears a sensitive portrait of Harriet sculptured in high bas-relief. On the reverse is the moving figure of a freed slave girl, who is lifting her arms to the heavens, looking toward a bright future; in the background are the whip and a chains from which she has been unshackled.

The medal was struck in both silver and bronze editions.

Thank you for all your comments, the history of each Medal is fascinating, although the story always has different points of view, but the medal reminds us of the fact and each one gives its own interpretation. Thank you.!!

Nice blog. I would add, as others have, there were many reasons for the Civil War. I would bet you can't find that book in any public library today. Hope I'm wrong. Thanks.

Thanks for the post. I love medals, they don’t have to follows the rules like coins (usually) do. The creativity of these medal is wonderful, and a preeminently worthy subject as well. Jim

Beautiful Medal! Thanks for sharing it with us!

Hall of Fame medals make a nice collection. There were other reasons the Civil War started other than her book.

Medallic Art Company was truly responsible for some of the most beautiful medals ever created. I always marvel at the intricate detail and high relief of their medals. Thanks for sharing another of their treasures.

Great medal nd story. Part of our history when you get a chance look at the medals overseas there just as beautiful and mean so much. You will be surprised. Auction houses carry them because no one wants them. They want to find the million dollar penny. I like medals. Thanks for the story and picture.

Lovely. As a writer, I'd like to own this medal.

Cool medal. An half a million copies in the mid-1800's, amazing. This great contributed to the tension between the North and South Thanks.

The NYU Hall of Fame medals all have a distinct look and make an interesting series. I like them all.