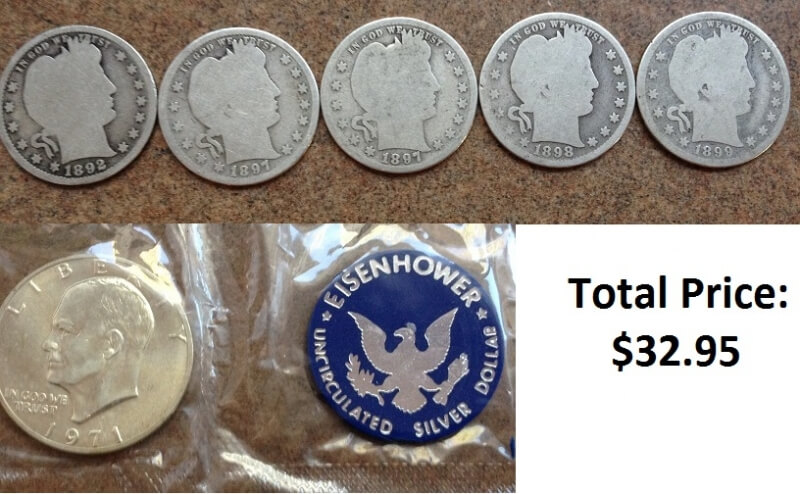 Hello once again everyone! I recently scored big time at the Omaha Coin Club's 930th meeting, which also happened to be live auction night. The item I wanted to buy, a VF-25 ish 1835 half cent, was auctioned off just as I was checking my phone. The coin ended up not selling, even though the minimum bid was $20. I blame my friend. But anyways, lets take a look at what I got. First off, I was able to snag a small bag of five (5) barber quarters, all in AG-G (no details coins) from the 1890's... The dates were fairly decent, but nothing major. I believe it had the following dates: 1892, 1897 (2x), 1898, and 1899. No mintmarks, but some nice coins! The price for all five was $26. Now the best score of the night was my first ever 40% silver Eisenhower dollar. I have been meaning to pick one up, but I keep procrastinating. It is sealed in the OGP, and looks really nice. It still even has the COA! Anyways, the meeting was fun and the auction was even more fun! The one thing that I regret is that I did not buy a lot of things!

Sounds like you got some cool things and had a great time! I wish I had a local coin club!

great pick up! i will be going to a con show show in Chatanooga soon! i hope I find some nice coin and i will write a blog about it for yall if u reply to this comment!

That would be cool! Cant wait to see what you get!

Good finds. Auctions are a bunch of fun. You have to be careful though. It's easy to get "auction fever" and overbid in the excitement! Thanks!

Those are some great finds! I will post about my club auction. Of

It looks and sounds like you did very well! Congratulations!

930 meetings! Incredible. My coin club also has a nice auction. You got a great deal!