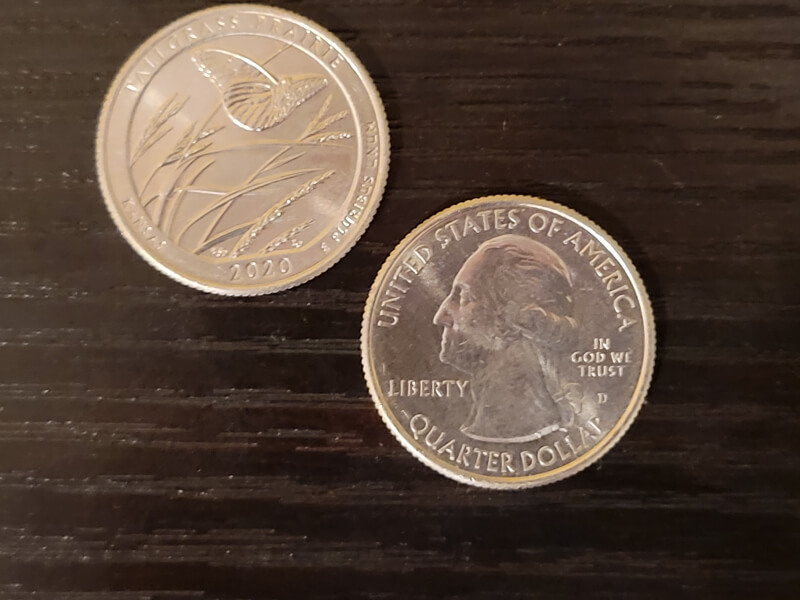 From making the blank out of a coil of metal, to striking the coin and putting it in bags and containers, the minting process has five steps. The mint only makes nickel, dime, quarter, half dollar, and dollar blanks. The mint buys penny, bullion coin, and numismatic coin blanksThe first of these steps is to make the blank. To do this, the mint buys a 1,500 foot coil of metal. They then put this coil of metal through a machine, which will straighten the coin. Then they put it through another machine called a blanking press. The blanking press cuts 14,000 blanks out of the straightened metal. The diameter of the coin is slightly different from the finished product.The second step is to send the blanks to an annealing furnace. The annealing process softens the blanks and allows the blanks to be shaped without breaking. During this process, the blanks are heated up in the annealing furnace to 1,600 degrees Fahrenheit. The inside of this furnace has no oxygen. This lack of oxygen prevents the blanks from tarnishing. After being heated up to 1,600 degrees Fahrenheit, the blanks are put into a liquid made up of water, citric acid powder, and lubricants.The third step is to wash the blanks in a mixture of cleaning and anti-tarnish agents to restore their original color. The blanks are then dried by a steam dryer. The blanks are then moved to the upset mill.The fourth step is the upset mill. To upset the coins means to upset the rim of the coin to create a raised rim. To do this, the blanks are fed into a groove with a slightly smaller diameter than the blank. This pushes metal up to create a raised rim. A blank with a rim is called a planchet.The fifth and final step is to strike the coin. This is done by forcing two dies together, one with the obverse design and one with the reverse design. The dies come together around the planchet and force the design into it. A collar is placed around the coins rim to stop it from expanding too much. This collar also used to make the edge a reeded, smooth, or lettered edge. Dollar coins receive a smooth edge, and then are sent to a machine that rolls the edge lettering onto it.Finally, the coins are done. Dimes and quarters are counted and put into bulk storage, while nickels and pennies are put into storage without being counted. They are then put into bags, weighed, and sent to Federal Reserve Banks for distribution around the country. Numismatic coins are packaged into sets for sale to the public. Bullion coins are put into 500 coin monster boxes for sale to dealers.