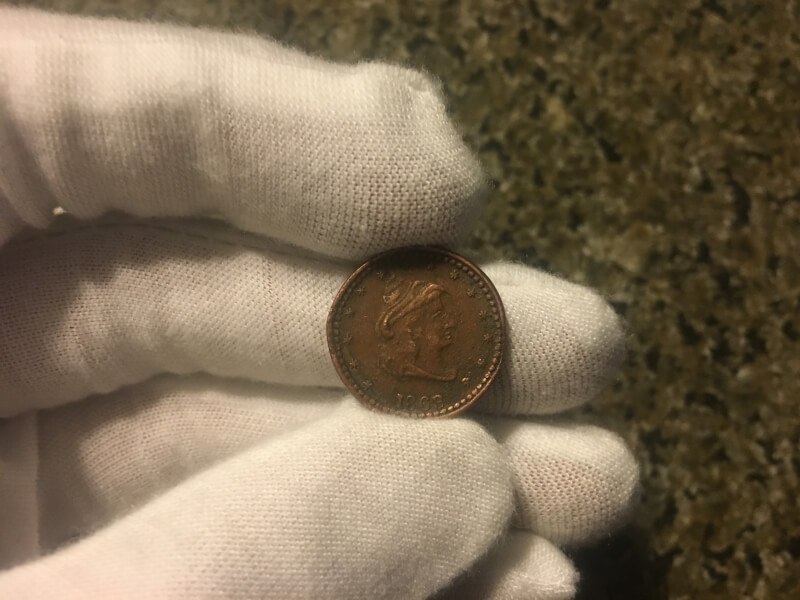 01 Feb 2018
I wasn't planning on making another blog today, but I received a Civil War token (CWT) as change today so I had to share this cool find!
There were many different political and patriotic themes depicted on CWTs. Personally I feel the themes, inscriptions, and devices on CWTs are intriguing. Some typical inscriptions read: IT MUST AND SHALL BE PRESERVED, ARMY AND NAVY, OUR ARMY, OUR NAVY, OUR CARD, OUR COUNTRY, UNION FLOUR, LIBERTY AND NO SLAVERY, THE FLAG OF OUR UNION, FOR PUBLIC ACCOMIDATION, ONE COUNTRY, and NOT ONE CENT.
This particular CWT depicts a busy with 14 stars outlining the borders, on its obverse. And has the inscription 'OUR NAVY' on the reverse. it weighs 2.9 grams, and is 18 mm in diameter.
Brief History of Civilian War Tokens:
Civil War Tokens were privately minted and distributed by the United States from 1861-1864. The widespread use of the tokens was a result of the scarcity of government-issued cents during the Civil War.
Civil War tokens became illegal after the United States Congress passed a law on April 22, 1864 prohibiting the issue of any one or two-Cent coins, tokens or devices for use as currency. On June 8, 1864 an additional law was passed that forbade all private coinage.
Civil War tokens are divided into three types, store cards, patriotic tokens, and sutler tokens. All three types were utilized as currency, and are differentiated by their design.

that is really cool thanks for sharing

That is so cool! Great find! I've just started to collect some Civil War Tokens. I use Q. David Bowers "A Guide Book of Civil War Tokens" 2nd edition. I think it cost about $35.00 Have fun!!!

Today you got the find of a lifetime. Its unbelievable how some people don't bother to look at their pocket change.

It's honestly crazy, at first I thought it was a foreign, but after looking at the date and seeing the reverse I knew I had found a war token. Such a cool find. Glad I was able to share this experience! Thanks for commenting!

That's great! The thing is, the person who gave it as change was probably trying to get rid of it thinking it had no value!

Honestly, probably, it's honestly crazy, but i appreciate them putting it into circulation for me to find! Thanks for commenting!

Thanks for the suggestions! I'll look into them.

What a great find. All I ever get are Canadian coins! Get the book everyone is recommending, A Guide Book of Civil War Tokens 2nd Edition by Bowers. I just bought it recently. It's VERY good! Thanks..

Thanks for the suggestion, and I never really find anything to that degree in circulation, I usually only ever get Canadians as well.

Great find. First for me. I wrote a series on them if you would like to see them go to my site hit on any blog a list comes up hit tokens. When it says see more click on that it will bring you to them. Congratulations it's in great shape. I wish I had found it nd didn't have to pay for it. Good hunting. Mike

It's a first for me as well, I had no idea something like that could be found in circulation. And I will definitely check out your site. I am still fairly new to tokens, but I do know a decent amount of general information. Thanks for commenting!

Wow, that is better than anything I have ever found in change. The CWT book from Whitman is still in print and pretty affordable.

I never would have expected to find something like that in circulation. And thank you for the suggestion, I will look into it as well!

What a great find! Dave Bowers' Red Bk of Civil War tokens is an excellent reference.

Thanks for the suggestion, I'll look into it! Thanks for commenting!

What a great way to receive a Civil War Token. If you don't have the reference books, I would advise you to find some copies.

Actually i don't have any reference books. Which ones would you consider getting? Thanks for your comment!