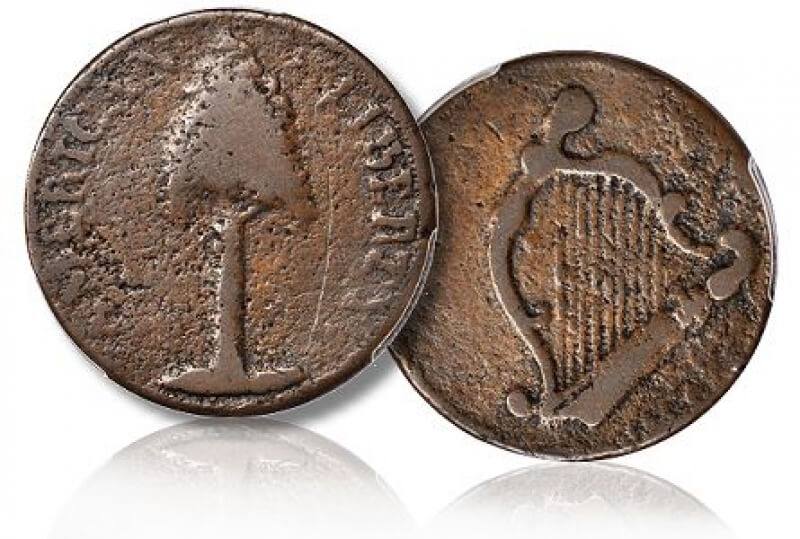 08 Feb 2018
New Hampshire was the first of the states to consider the subject of coinage following the signing of the Declaration of Independence.
William Moulton (silversmith at the time) was given the authority to make a limited number of coins, in which were composed of pure copper authorized by the State House of Representatives in 1776.  These coins are known as the New Hampshire Copper, and there are currently only 8 or 9 known to still exist today.
The design depicts a famed New Hampshire pine tree, which was a symbol of the colony. New Hampshire pine trees were provided for years to the British Crown for Royal Navy shipments, and the Pine Tree motif had appeared on various denominations of early New Hampshire paper money since 1794.
The obverse legend selected for the proposed 1776 coins was AMERICAN LIBERTY which was inscribed to the left and right of the pine tree. The reverse bears the date 1776 and features a harp. The harp's large and small strings symbolized  the agreeable unity between both the large and small colonies.

Hi again well any blog that gets my interest I look into. This copper is counterfeit constantly and the prices on the eight remaining go from fifty to one hundred thousand dollars. I think that price is underrated. It should be more with that many remaining. Some of the fakes have the letters WM on the reverse and no harp. People are buying these like there real. Thanks for the blog because you wrote it I picked something up. Thanks. And good luck Mike. .

The Red Book will be a good book on research and pictures and history and prices give it a look it's in the beginning. Mike

I have the Red Book, it's what actually gave me the idea to talk about this coin. I took some general information from the book, and then expanded into it further! Thanks for the comments!

Thanks for the information.

Nice blog and photos. I learned something today. Thanks!

Glad you learned something! Thanks for taking the time to read my blog!

Interesting blog! Enjoyed it and the photo. I don't know too much about this area so I appreciate your blog.

Beautiful and rare colonial. Maybe not "beautiful" in the classic sense, but a genuine piece of history.

it's amazing how Numismatics can tell a vastly rich history. I just wish I could soak everything up and be an expert on it all, it's that cool! Thanks for reading my blog!

Colonial coppers are very interesting. Not all of the 13 colonies minted coins so you may want to consider including colonial paper in your set.

I figured I would do that for the other colonies, maybe I'll do a little bit of both where I can

I hope you do it. It will be a challenge. Especially in the pocket. Some are expensive but on a budget you can do it. When you finish it put the pictures up. Great set thanks and lots of luck. Mike

I'm starting a new series on post colonial coins for each of the 13 colonies, hope you guys enjoy.

I'm starting a new series on post colonial coins for each of the 13 colonies, hope you guys enjoy.

very neat coin and thanks for the information. the design is great even though it is old it is still very recognizable

Indeed, it's got a lot of history